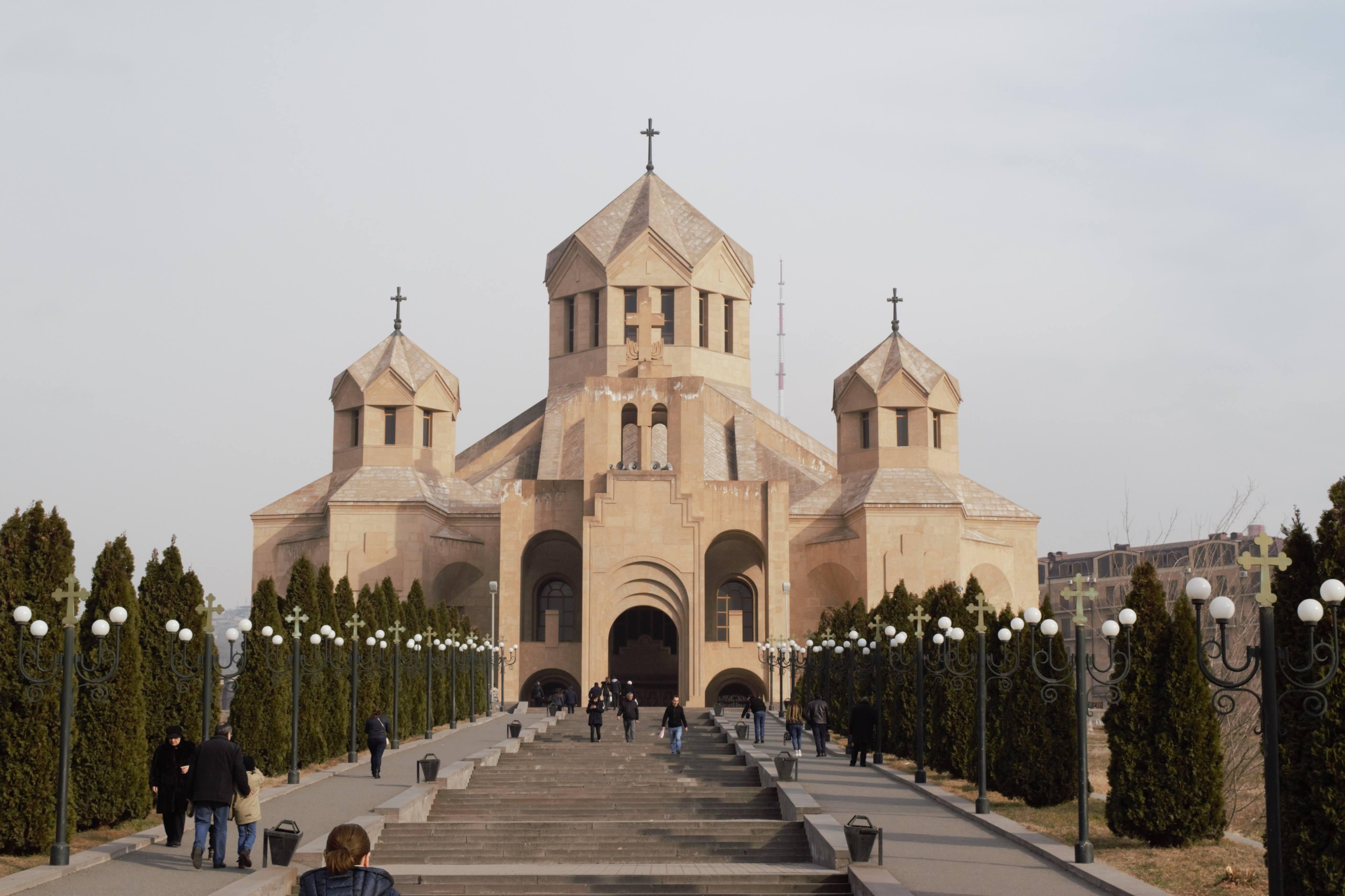 Armenian Church History as an Inseparable Part of Public Education: Two Priests in Armenia Argue Such Instruction is Important

Armenian Church History lessons were first introduced as an obligatory subject in Armenia’s public schools by the Ministry of Education in 2002.

The Christian Education Center (CEC), one of the departments of Mother See of Holy Etchmiadzin, monitored the teaching methods, preparation of teachers, publication of textbooks and other functions when the process was always supervised by the Armenian government.

Entrusting a religious organization with secular functions raised eyebrows among representatives of religious minorities, politicians, and lawyers. Amendments to Armenia’s Constitution were introduced in 2005 and 2015. Article 17 of the Constitution states that “religious organizations shall be separate from the State,” and according to Article 18, the Armenian Apostolic Church is recognized as a national church and its relations with the Republic of Armenia may be regulated by law.

17 centuries after being the first nation to adopt Christianity, the Armenian Apostolic Church continues to have a strong presence in Armenians’ lives. Now, with new ministers appointed, the Armenian Church History subject is facing a few challenges.

Father Arnak: Priests Do Have a Place in Schools

Attending school in a post-Soviet Armenia in the 1990s, Reverend Father Arnak Harutyunyan first discovered his spiritual connection with religion at Sunday School. He calls it “a wonderful place where children become acquainted with the Bible, church, and God, and are taught to be respectful, humble and willing.”

Praising his Sunday School teachers, Father Arnak understood at a young age that he always had that spiritual connection in his heart. He later studied at the Gevorkian Theological Seminary and has been a priest for almost 9 years, currently serving at Saint Gregory the Illuminator Cathedral in Yerevan.

Seeing students at church is not an unusual sight for Father Arnak. He says high school graduates often come to church on their last day of school to pray and receive blessings, and teachers occasionally organize outdoor Armenian Church History classes for middle schoolers to learn about the church’s architecture and history. He himself has also visited schools.

“We don’t have any specific schools we collaborate with, but we visit for multiple reasons. We receive invitations to events that are usually organized by Armenian Church History teachers and we respectfully accept. If the school principal wants us to perform a house blessing after Christmas or Easter, we do it. If students have further interest in Armenian Church History, we visit to answer their questions. The same goes for universities.”

Father Arnak criticizes people who claim that a priest has no place in a school. He says that any educated Armenian understands the value, importance and the mission of the Armenian Apostolic Church, referring to the claims made by Armenian Minister of Education and Science Arayik Harutyunyan.

“I don’t presume that the minister is speaking against the Armenian Apostolic Church. We have to be patient and level-headed to see the stance of that person as a citizen of Armenia, may it be a minister, a deputy minister, a school principal, or a teacher. But one should never confuse their personal viewpoint with the public’s.”

As a priest and as an Armenian citizen, Father Arnak is confident that being a Christian is an inseparable part of Armenian identity.

“1,700 years is enough time for Christianity to be merged with the Armenian identity, therefore, it is hard to take Christianity out of an Armenian. If being under the Soviet reign for 70 years couldn’t do it, then it is almost impossible to do it now. The church has become one with the Armenian culture, and their union has had great results for Armenia. Now, of course, there are Armenians that choose to be atheists or Muslims or a follower of any other religion, but that number is very low.”

Putting aside all national values of Armenia, Father Arnak accentuates the significance of Armenian Church history in school curricula.

“We have all learned at school from our history lessons that the Armenian Apostolic Church was more than a house of worship. Our church has had power, has been the patron of Armenians, has established schools, has provided education. In short, it has always been present in our lives. And because our church has had a stable presence, our children must know about its history and activities.”

As to whether or not Armenian Church history textbooks need revision, Father Arnak believes that all textbooks need to be revised once a year, so the information is up-to-date. Since people are always progressing, textbooks should be modified accordingly. He clarifies that it’s not  church history that requires examination, but the methodology. He also addressed the issue of not studying about other religions during the classes.

Father Arnak has met students that were not followers of the Armenian Apostolic Church both at schools and church. He has not spoken with them, but with their parents.

“In general, the conversation is not aimed at persuading them to become Christians, but it’s to explain what Christianity is, what the Armenian church does, and what role it plays for an Armenian. Whether or not they decide to convert, it’s up to them. Children of non-believers can treat Armenian Church history lessons simply as an interest. This could give them the opportunity to know what exactly they’re rejecting. Every atheist should read about Christianity and religion in general in order to provide arguments to why they don’t believe. If the child comes from a family of non-believers, they should still take the classes because it’s a part of our history. People shouldn’t confuse Armenian Church history with religious studies.”

For an Armenian, praying is an essential part of their lives. Father Arnak says that Armenians have always prayed; before eating, before going to bed, while working. The act is engrained in Armenian culture. He believes that praying before Armenian Church History class begins does not violate anyone’s rights if it’s a consensual decision.

“There are many parents that are more than happy to have their kids pray not only before the class starts, but at the very beginning of the school day. If there’s a consensus, then it’s permissible. The teacher should discuss this with the parents to reach an understanding. If there are parents who disagree with praying, they should respect the majority’s decision. They can easily explain to their children to politely stand when the rest pray.”

The line between preaching and teaching is blurry. Preaching is done by religious leaders, whereas a teacher’s job is to educate children.

Father Arnak breaks it down the following way: a teacher who’s a follower of the Armenian Apostolic Church involuntarily preaches. They preach with their words and their silence. Any Christian is a preacher. Their manners, morality, and attitude are all means of preaching. He believes that Armenian Church history classes should be more than just informative, as should every other subject. A teacher should not only educate, but should also make their students love the subject, whether it’s math, physics, languages, or anything else. But, if we’re talking about propaganda, the class is void of it.

Father Haygaz: Christianity Is an Integral Part of Being Armenian

Reverend Father Haygaz Masoyan, a Syrian-Armenian repatriate who has been living in Armenia for three years, had a slightly different educational background. Since he was born in a Muslim country, preserving one’s Armenian identity meant having a much stronger connection with the Armenian Apostolic Church. Instead of having Armenian Church history as a subject, they were taught religious studies that included excerpts from the Bible, religious fables and proverbs. In accordance with this, they also had Sunday School for further Christian studies.

Back in Syria, Father Haygaz served for 18 years at Saint Gregory the Illuminator Church, where 5th and 6th graders from Sahagian and Zavarian Armenian schools visited once a week to learn how Mass is conducted and how to participate in the service. Every school had an assigned priest who visited them at every religious and Armenian national holiday.

“Each Armenian school in Syria has a spiritual shepherd. They go to schools to offer blessings, teach, advise students and teachers, and hand over diplomas at the end of the school year. I have been appointed to teach religious studies at Zavarian school once, and we have had multiple priests teach at Karen Jeppe Armenian High School.”

Since Father Haygaz moved to Armenia, he has been serving at Saint Katoghike Church in Jrvezh.

He says he has not been instructed to visit a school yet, but they do have teachers bring their students to have an in-depth lesson about Christianity. Students usually come during after-school hours in order not to disrupt classes. Most of them view the church as a spiritual structure, others regard it as merely a building where they light candles and leave. Father Haygaz believes that he has been able to successfully transform uninterested middle schoolers into eager learners because a priest’s attitude and delivery of speech creates a bridge between the two.

Whether or not a priest should have the right to set foot on school grounds, Father Haygaz says that if that priest is certified to educate students with the principal’s consent, then they should. If they are invited to offer their blessings, then they should. Christianity is an integral part of being Armenian, and so is learning about the church’s history. Christianity is one of the biggest factors in creating the image of Armenia.

“How should we spread church awareness? By educating people on the matter. Where do we educate? At schools. Of course, we should have Armenian Church history lessons. It serves as the spiritual and national foundation for all Armenians. Students are not being enslaved by learning it, they are being prepped to become better Christians in the future. As for students who are not believers, they should consider the class simply as a source of information.”

The methodologies of the teacher during Armenian Church history classes affects students greatly. Father Haygaz recalls an incident when a teacher said to her students that she does not believe in what’s written, but she is obligated to tell them what it says. He says that making such statements can arouse suspicion in students. A teacher’s personal stance shouldn’t obstruct the class process. Instead, they should pour their heart into teaching the class. A teacher must not make their students convert but must spark an interest in them for better results.

“A teacher has to be more than a teacher, they must be educators, mentors. They mustn’t recite the textbook to the students, they must explain, break down every word, make it interactive, persuade them to ask more questions, serve as a good example to them. You can’t expect someone to bow down if you don’t do it yourself first. Once a teacher incorporates all of these in their lesson, that’s when they truly educate.”

“You can literally be separated from your mother, but you can never be separated from her. The state and the Armenian Apostolic Church are like train tracks: they never collide, but they are parallel. This needs to be applied more expressively.”

Father Haygaz asks all Armenians a question: “Do you consider yourself an Armenian Christian, or a Christian Armenian?” Food for thought.

Anahid Akkam is an Armenian writer born and raised in the UAE. After moving to Armenia in 2008, she found joy in reading which soon turned into writing. She is currently studying English and Journalism at Yerevan State University of Languages and Social Sciences.