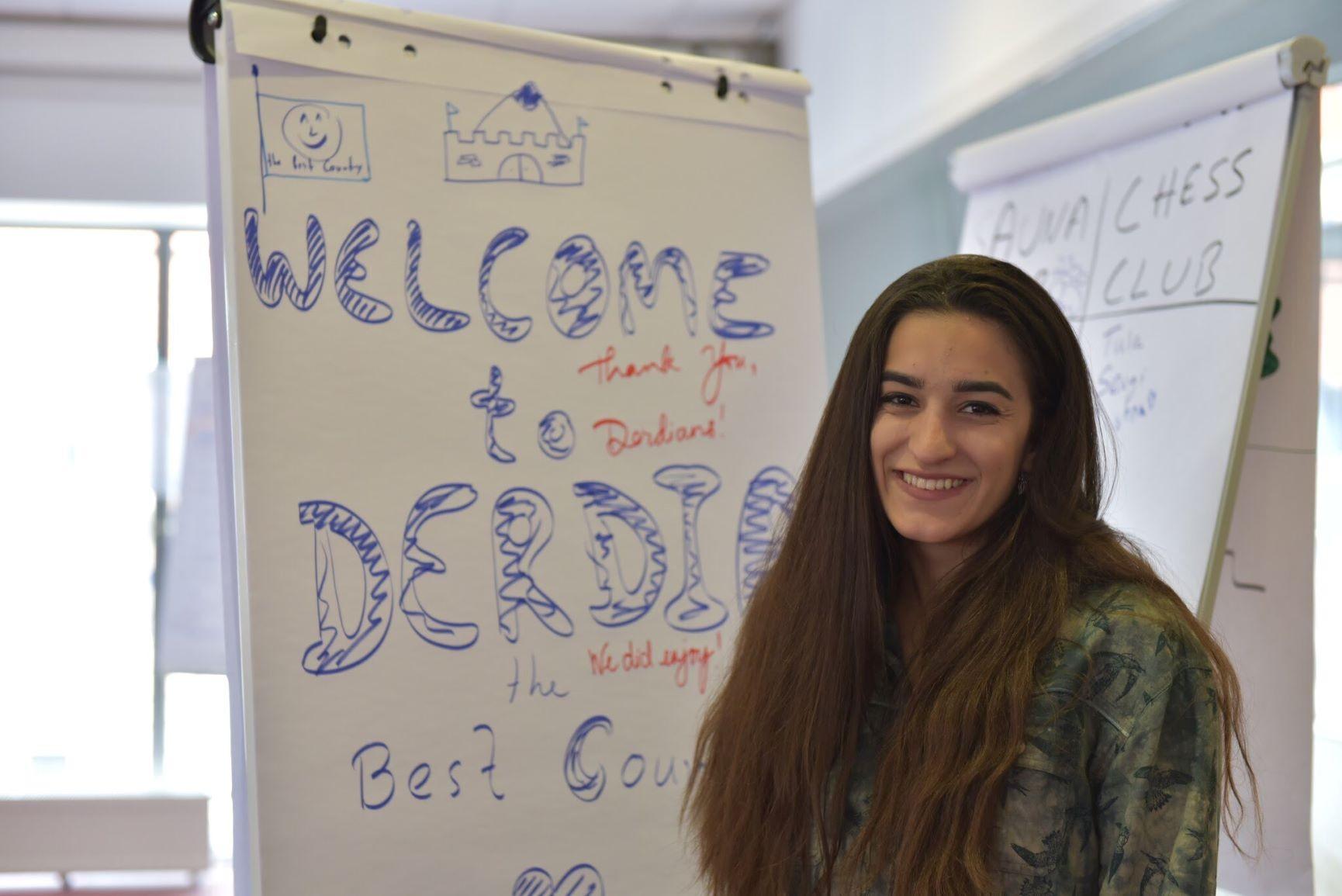 In the middle of the most fantastic flight I have ever had, the person flying with me cut my wings – “It’s a shame you are not a boy” he said.

The first time I heard this expression, it made me very proud, because it was a hint that I was improving myself – it delighted me to the fullest. I wanted to hear it all the time, as it made me feel different than the rest of the girls. At some point, I even started regretting the fact that I was not a boy among them.

I got involved in different programs and projects that Children of Armenia Fund opened in my village. For some reason everyone in the foundation would encourage me so much after every single thing I did. They would call me a leader because I was the Student Council president, a debater, because I took part in the Karakert debate club for years, a superstar, because I was involved in almost every project COAF had, but none regretted the fact that I was a girl. Soon enough, I got so involved in those programs that the whole village knew Khanum. Even after all this, my relatives kept telling me “It’s a shame you are not a boy.”

What can I say, even though I understood there was something wrong with the expression, it still made me feel proud. I carried this expression with me for 10 years until I started questioning why my relatives could not be proud of me without regretting my gender. I just turned 20 and I’m still hearing it.

The last time “It’s a shame you are not a boy” made me proud was in Yerevan's Zvartnots Airport, before I left for the U.S. for an academic year. My grandma hugged me, cried on my shoulder, told me, “It’s a very sad thing that you are not a boy,” kissed my forehead and let me go. I felt blessed to hear this sentence but later on, when I was already in the airplane, something made me feel so small. I thought whatever I do will never be good enough.

I started my exchange year in Hawaii not knowing who I wanted to be. Whenever the teacher asked a question, I was always scared to talk louder than the boys. One day, during my history class, a girl answered the teacher’s question perfectly and I was so amazed that without giving it a second thought, I told her that it’s a shame she was not a boy. I wasted an hour of my life in detention. For some reason, what was a compliment for me was offensive for her. Soon enough I learned how to be proud of myself and I promised myself I would never again let anyone say that it’s a shame I am not boy.

I am one of many young women who are underestimated and stigmatized because of our gender.  Armenian society has been through a lot of challenges. We have seen kingdoms crash, we have seen the Genocide and the Karabakh conflict.

We've had numerous heroes who saved the Armenian nation, their families and values, such as Vardan Mamikonyan, King Pap and Monte Melkonyan. We got used to males saving our country and families so much, that when a woman tries to reach higher positions than men typically have, she is not recognized or worthy of whatever she has achieved.

This comes from an ancient but relevant stereotype that Armenian families carry. If there is no son in the family to continue the bloodline, then the parents have achieved nothing – girls don’t count. There is no place for girls in the family tree.

No one talks about this issue because it is considered a part of Armenia’s culture. Let me tell you that this is not a culture. It’s a sick stereotype that every girl goes through while Armenia considers itself a Western country that seeks to achieve equality, tolerance and democracy.

This anti-women mindset has always been a part of Armenian society.

During the last 50 years Armenia has taken a few steps forward and hundreds backward. We introduce equality to current generations, teach them how to treat each other without discrimination while we ourselves show that being a girl, a woman is a shame. There are thousands of girls out there who don’t have anyone or anything to encourage them.

People throw stones at girls when they want to become football players, because it a man’s profession. We are considered crazy when we want to become politicians because politics is not our place. People blame girls for dreaming because they think we should dream for others, not ourselves.

We are told to study to teach our kids, but never to learn to change the world. We are hardly given options. Therefore, girls listen to what people say about them and become victims of stereotypes. We never talk about it, but there are girls whose dreams crash because they have been told that the highest steps are unreachable. It’s a shame that they are not boys.

We cannot solve the problem if we don’t make an effort, if we don’t talk about it. I don’t ever want to hear anyone tell my kids that their gender is a shame. I want my grandma’s generation to be the last to ever say “It’s a shame you are not a boy.”

To tackle this issue, my friends and I have started a program called TEACH (Talk, Engage, Ask, Care and Help), which is a three-day professional development weekend for 40 preschool teachers. Each year, we invite specialists to work with the teachers on different topics, which include gender equality. We want to empower youth so no one feels ashamed of their gender and so that gender never becomes a barrier for them. We all need to make sure we show gratitude towards things that girls do without putting limitations on them that will be stuck in their minds forever.

I want to make sure girls never doubt their abilities because of stigmas and cultural stereotypes. I don’t want to hear any excuses as to why, at this age, I still hear the expression. We have to start from somewhere.  I don’t want other girls to go through what I did. I feel responsible for the future generations of women who can become heroes if we don’t cut their wings.

(Khanum Gevorgyan is a B.A. student at the American University of Armenia majoring in English and Communications. She is also a Future Leaders Exchange Program alumni from Karakert village.)

An AUA Faculty Member 2019-05-12 15:57:43
An interesting development. Unions play an important role in some societies. As a full time faculty member at the AUA I am surprised and disappointed that the founders of this Union which claims to "promote substantive faculty participation" did not include the other faculty members of the university in its decision to start a Union. Was this union founded in secret? If so, why? Given the openness at the AUA and the role and importance of AUA's Faculty Senate it is disappointing that Dr. Paturyan and others took it upon themselves to start a Union without the involvement of the other faculty members at the University. What is more disappointing is that it appears from the Union's website that of the 18 founding members only one or two are from Armenia. (I am not leaving my name or email address because the founding members decided to work in secret.)
Leo 2019-03-28 01:08:37
Thank you very much for this well-written, beautiful and empowering article!
kath Lestina 2019-03-26 17:34:42
This is an excellent article written by an amazing Armenian young woman!
Flora Keshishian 2019-03-25 01:45:43
Khanum Gevorgyan, good for you for writing the reflective essay. I do agree with the idea that boys are more valued in Armenia.... What I would like to remind you is that, gender inequity is rather universal, but it manifests in different ways and to varying degrees in each society. That said, though, it is important to realize that by voicing a concern, we make awareness about it, hence the beginning of a change. So, I suggest that you keep writing and talking about the topic and encourage your friends/classmates and other women to do the same. In my view, a new born baby is perfect in that it has the capacity to become anything it wants. Societal ideologies, however, place the child in a particular box. It is important for the child to dream big and not let any socially constructed obstacles stop them from reaching their dream.
Mary Shea 2019-03-24 14:07:29
Thank you Kharum for sharing your experience and efforts to change Armenian society. I hope that your voice will be heard. You are an excellent writer and your project TEACH sounds promising. It is smart to start with educators who work with young children. Best of luck with your efforts and studies .
Gabe Korajian 2019-03-24 12:26:04
Dear Khanum, I am really proud to see you have started a program called TEACH (Talk, Engage, Ask, Care and Help), to create awareness among teachers to treat our girls fairly and equitablly. The root cause of such behaviour in our society is lack of awareness and education. If you look at Armenian girls in the Western hemisphere, they are more or less treated equally with their male counterparts. I have two daughters who have grown up to be proud female professional Armenians. Sara is a politician and Ani is a teacher. I am proud of them and I always believe they are a gift to me and my family. No male will replace them. Please keep the good work and create awareness on women issues in Armenia. You are a leader and will always strive to do good to humanity. Bravo Ms Gevorgyan!