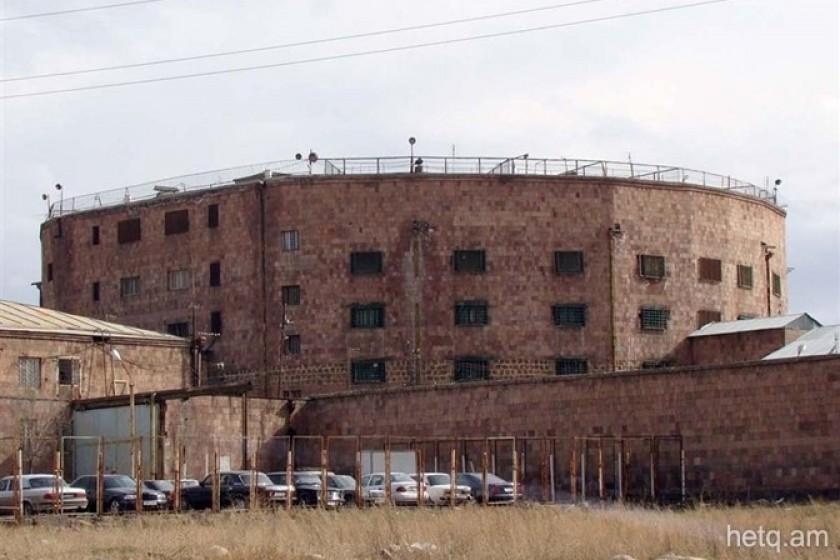 LGBT Convicts in Armenia: The Term “Homosexual” is a Lifetime Stigma in the Criminal World

In its 2017 Annual Report, Armenia’s Prison Monitoring Group states that LGBT (lesbian, gay, bisexual and transgender) prisoners face continuous and systematic discrimination, ill-treatment and torture in Armenia, due to their sexual orientation and gender identity.

During January-February of 2016 the Group of Observers received 112 allegations and paid 94 visits to the following penal institutions:  Abovyan, Artik, Armavir, Goris, Hrazdan, Kentron, Kosh, Nubarashen, Sevan, Vanadzor, Vardashen and  The Hospital for Convicts.

Besides psychological pressures, the report states that they are also subjected to sexual exploitation and physical abuse by both sides - other inmates and the prison staff.

Communicating or having any affiliation with LGBT inmates is unacceptable, according to the report’s findings.

The Nubarashen Penitentiary administration also confirms (Report-page 99) that other convicts and detainees refuse to communicate with them or use the same tableware. According to the unwritten laws of the criminal subculture, if a heterosexual person communicates with a homosexual, he gets “broken” or loses the status of a “normal human”.

Keeping convicts and detainees separate based on their sexual orientation or gender identity is not stipulated by any in-state law.

Moreover, Armenia’s Penitentiary Code and the Law on “Treatment of Arrestees and Detainees” state that the procedure and conditions for the execution of a sentence and keeping detainees under detention should be applied to all prisoners regardless of their sex, race, color, language, religion, political or other opinion, ethnic or social origin, nationality, birth, property or other status. They all have a right to be called by their name or surname, as well as a right to respectful treatment and personal safety.

Whereas, public monitors recorded (Report-page 99), that LGBT prisoners in accordance with their written applications are transferred to cells designed for “deranged”, “arvamol”-s (addicted to males), “gomik”-s or “foreigners”, which significantly differ from other cells of prisons with their unsightliness and insufficient conditions (follow the link to see pictures of cells).

Prison staffers justify this by citing the necessity of assuring the security of LGBT prisoners from sexual or other types of abuses, exploitation, inhumane or humiliating treatment. As a justification, LGBT prisoners mention their sexual orientation, gender identity or the impossibility of serving the sentence in the same cell together with others in the applications. Whilst, the applications are not being registered by the prison staff, since there is no such legal procedure provided by any law.

It is noteworthy that in reality not all prisoners residing in the same cells and holding the same status identify themselves as homosexual. People abiding unwritten laws of criminal subculture or those who have breached them and people having committed certain crimes are also incarcerated in cells designed for homosexuals (available in Armenian).

“Cleaning is their job”

According to the RA Penitentiary Code, by their own will and the decision of the head of the institution, convicts can be engaged in unpaid works aimed at improving penitentiaries and their adjacent areas, provided that such engagement is not at the time of rest, and does not last more than two hours a day.

The decision of the head includes information on the start date and location of the work, its brief description and expected duration, as well as number of engaged convicts. By the way, the RA Law on “Treatment of Arrestees and Detainees” forbids involvement of detainees in unpaid works, except in sanitary-hygienic ones.

LGBT prisoners are involved in unpaid works, too. In contrast with others, they do the most humiliating work. Ex-prisoners of Nubarashen and Sevan penitentiaries told us more details about the situation.

In response to requests of The Center for Legal Initiatives NGO, Armenia’s Penitentiary Service certified that the number of incarcerated LGBT people is not known. They noted that their separate registration is not conducted to avoid any differentiated treatment. Meanwhile, answers to requests from penitentiary institutions contain contradictory information.

In the Abovyan, Artik and Armavir penitentiaries homosexual prisoners are not registered. The Goris and Hrazdan penitentiaries, and The Hospital of Convicted hold incarcerated people separately in compliance with the legal procedure provided by the law.

Meanwhile, the statistics (available in Armenian) of alerts and visits of the Prison Monitoring Group demonstrates the opposite in some cases.

In 2017-2018, public monitors received 25 alerts from LGBT prisoners and paid a total of 19 visits. The majority of the alerts were received from Nubarashen (15) and Armavir (7). 2 of them were from The Hospital for the Convicted, and 1 was from Abovyan. Out of 19 visits, 14 were paid to Nubarashen and 1 to Abovyan. Monitors visited Armavir and The Hospital for the Convicted 2 times each.

Alerts were referring to health issues and personal safety of LGBT inmates, their living conditions, as well as cases of self-injuries and discriminative treatment by the prison staff.

Still, LGBT people rarely voice about violations of their rights which is conditioned by a number of reasons. Firstly, Armenia does not have legal regulations for protection of right to freedom from discrimination, as well as effective punishment and liability mechanisms for human rights violations driven by hatred. And secondly, LGBT inmates do not want to reveal their status or do not perceive the ill treatment against them as a problem.

There is no anti-discrimination law in Armenia. In February 2018, the Ministry of Justice developed and put into circulation a draft law “On Ensuring Equality”. It has not been adopted yet and basically does not correspond to international and European minimum standards of anti-discrimination legislation. Among other problematic aspects, the protected grounds of discrimination are limited in the draft law and provide no protection from discrimination based sexual orientation and gender identity.

The Armenian Constitution and penitentiary legislation contain non-discrimination provisions, which, however, are not comprehensive and do not provide mechanisms for legal protection. At the same time, the above-mentioned issues are not considered urgent or primary by the state and are in no way presented in respective state reports and policy papers.

For instance, annual and special reports of the Human Rights Defender of Armenia cover the rights of people living in closed institutions only in a general sense and do not them into groups. Therefore, it is not possible to find any mention on violation of rights of LGBT incarcerated people there.

Thus, because of existing legal and legislative gaps, cases of discrimination based on sexual orientation or gender identity in prisons do not receive proper legal evaluation and the foregoing cases are not being investigated effectively.

As a consequence, intolerant treatment, stigma and discrimination by other inmates and the prison staff lead to significantly insufficient and poor conditions for LGBT prisoners and may entail reintegration complications in the future.