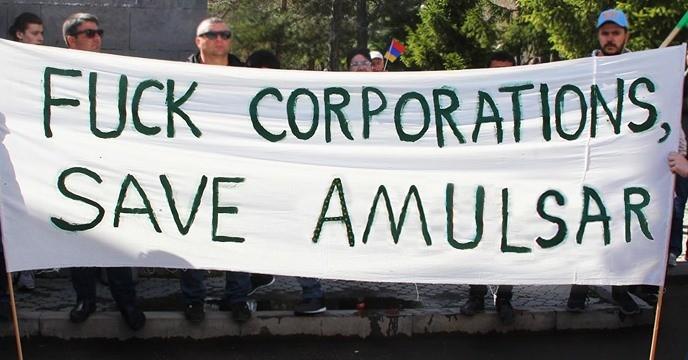 The Armenian Environmental Front (AEF) civil initiative joined by hundreds of signatories, has issued the following in response to the September 9 statement on Amulsar by Nikol Pashinyan.

Today, September 9, Prime Minister Nikol Pashinyan announced that following negotiations with Lydian, he will allow completion of the mine construction, and operations will be suspended only in the event of problems arising during that phase.

With this announcement, Pashinyan is contradicting his previous statements and promises. He had assured the public for over a year that the project would not proceed if it became apparent that it presented even 0.01% risk for the environment. Ignoring dozens of existing reports and surveys by local and international independent experts, Pashinyan authorized 400.000 US dollars from the Armenian state budget to be spent on an independent third party audit of the project's environmental impact assessment. When the results of this assessment were made public, Pashinyan, based on a memorandum ordered by the Investigative Committee and omitting several hundred pages of the report's critical findings, and after several hasty and staged "consultations", announced his decision on August 19 to open the mine and began sharing company-made videos and statements repeating the company claims.

Pashinyan's statement was followed by public and professional backlash, forcing the government to set up a public Skype meeting with ELARD-TRC experts so they could comment on their assessments, in order to avoid reading the report. During the August 29 Skype meeting, ELARD-TRC experts proved that Lydian's Environmental Impact Assessment (EIA) is full of inaccuracies, errors, and underestimations, and based on this, it is not possible to accurately predict the extent of adverse impact on this sensitive ecological site. Lydian's approaches to mitigate these adverse effects not only are inadequate, but are also missing several engineering processes (such as mine closure, acid water treatment). The ELARD-TRC panel has repeatedly stated that presently Lydian's safeguards for the safe operation of the mine are lacking expert evidence, so any attempt to rely on these guarantees will be a purely political decision, devoid of expert grounds.

Today September 9th, Prime Minister Nikol Pashinyan, by sidestepping numerous warnings from the professional community, results of the independent expert assessment initiated by him at the cost of 400.000 US dollars from the RA state budget, all the explanations given by ELARD-TRC during the Skype meeting, has announced the political decision to open the mine. This decision is substantiated first of all by the alleged lack of legal grounds for the termination of Lydian's activities, as well as by the interests of the "economic community" and the unexplained threat to Armenia's security.

We declare that Pashinyan has made an unlawful statement by abusing his power in which he has intentionally disregarded the numerous existing legal grounds, moreover claiming that there are no such grounds. The results of this independent assessment have shown that Lydian misled both the government and the people of Armenia, as well as its own investors and lenders, but Pashinyan sees no legal basis for ending Lydian's activities, and with his statement restricts the ability of other state agencies to act independently within their own powers. The laws of the Republic of Armenia on EIA studies has been completely violated by Lydian, as well as by former members of the government who endorsed Lydian's project, but Pashinyan ignores this outrageous illegality. Professional studies have revealed new ecological circumstances and have confirmed that Lydian did not ensure the completeness, reliability and scientific validity of the facts in its EIA; and thereby violated the requirements of Clause 4 Part 2 of Article 5, Clause 3 Part 2 of Article 27, Point 5 Part 2 of Article 21 of the RA law on Environmental Impact Assessment and Expert Verification.

Without the completion of the work that has been subjected to a 7-month fiasco by the Investigative Committee, Pashinyan makes such a statement and takes on the heavy burden of nepotism and highest level of support for the company. In addition, the conclusions submitted by the Ministry of the Environment on September 4 and all related documents (such as those of the Institutes of the National Academy of Sciences) on the grounds for revoking the Lydian EIA permit have not been publicly disclosed and published to this day.

Before June 2018, just at the construction phase, Lydian had already committed numerous violations, which were recorded both by local residents' videos and by the Environmental and Mining Inspection body. Additionally, the administrative act adopted by the Environmental and Mining Inspectorate in 2018 has already suspended Lydian's activities, a criminal case on illegal extraction has been filed, a notice of revocation of the EIA permit has been sent to the Ministry of the Environment as early as 2018, but the Government is still silent about this and is giving permission for more violations to take place. Moreover, the government continues to conceal the issue of violated rights of Jermuk residents, while the fact stands that no public hearings were held in Jermuk, and there is no (or at least not publicly available) document stating preliminary agreement for the project by Jermuk Community Leader and its Municipal Council.

We declare that Nikol Pashinyan's statement, that ignores existing and repeatedly presented expert and legal basis, by allowing the implementation of a program with multiple violations and shortcomings, is the highest level of patronage of a private company, which is a scandalous abuse of the people's trust and official powers. Therefore, Nikol Pashinyan and his government are responsible for enabling a corporation to make huge sums of money through blackmail at the expense of the entire population of Armenia. We have repeatedly stated that offshore Lydian is currently unable to enter investment arbitration as arbitration through its newly established subsidiaries is a procedural abuse. None of the companies created in August 2018 can sue Armenia. By calling for the opening of mine roads, Pashinyan creates fertile ground for Lydian to overcome this procedural barrier of corporate court, while the Armenian government's position in the dispute is so strong that the government may even file a lawsuit against Lydian.

Nikol Pashinyan and his government today are trampling on and betraying the popular revolution of May 2018, making possible the revival of counter-revolutionary forces that were part of the former regime. The Pashinyan government and parliamentarians who support him unconditionally or silently are fully responsible for placing the country in a state of turmoil. In the current situation, when it is evident that the large masses of the Armenian population do not trust the justifications for opening the mine and will oppose it, the call to open roads to Lydian at the Prime Minister's level hints at the use of state violence, thereby creating a threat to the legitimacy of the government.

We reaffirm our commitment to the protection of Amulsar and declare that we will make every effort in this regard and will continue to support all citizens defending their rights.

We urge the public to join the march in Yerevan on Wednesday, September 11, at 6:30 pm, which will launch from the public park of the National Assembly, as well as self-organizing in other ways and raising public awareness about it.