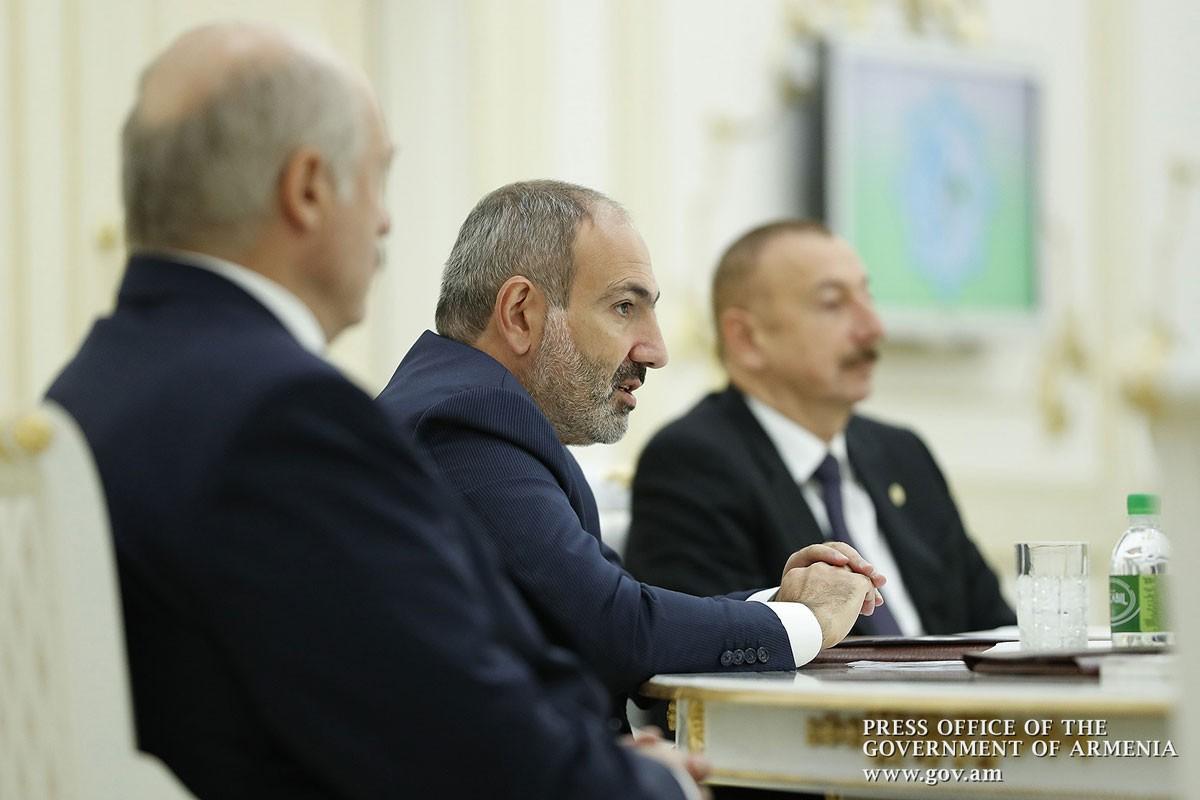 Pashinyan at CIS Council of Heads of State Meeting: “Garegin Nzhdeh fought against the Turkish occupation of Armenia.”

Prime Minister Nikol Pashinyan, who is in Ashgabat on a working visit, attended a regular meeting of the CIS Council of Heads of State. After a formal photo session, the Council of CIS Heads of State met in narrow and expanded formats.

Nikol Pashinyan addressed the meeting with a speech, in which he stated:

“I would like to start my speech with a vote of thanks addressed to highly esteemed Gurbanguly Myalikgulyevich and all our Turkmen colleagues for excellent organization of our meeting and for the warmth and cordiality with which we were greeted in hospitable Turkmenistan. I cannot help noting that I am very much impressed by Ashgabat’s magnificent architecture and modern appearance. By the way, this is my first visit to the capital city of Turkmenistan.

Also, I would also like to express appreciation for the work done by Turkmenistan as part of its presidency in the Commonwealth, aimed at developing the CIS. Your productive work is reflected in the list of issues on the agenda of our cooperation.

Regarding the issues that are presented for discussion, I would like to note the following. We welcome the Declaration on Strategic Economic Cooperation and will back any initiative aimed at deepening economic cooperation and expanding integration processes among the countries of the Commonwealth. The document defines the strategic goals of cooperation, for the achievement of which, we believe that consistent and coordinated work is necessary both in both multilateral and bilateral formats.

We support the signing of the CIS Convention on Transfer of Penal Sanctions Not Involving Sentences of Imprisonment. I believe that the Convention will help develop interaction in the application of alternative measures to imprisonment.

Among other issues on our meeting agenda, I would like to single out the joint appeal to the peoples of the CIS countries and the world community in connection with the 75th anniversary of the victory of the Soviet people during the 1941-1945 war. We consider it important to inform today’s youth both in our countries and abroad of the decisive role that our peoples played in the victory over fascism.

According to various estimates, up to 300,000 men and women of Armenian descent died in this war. Representatives of our people not only fought in the ranks of the Soviet army, but also took an active part in the resistance movement in fascist-occupied countries. Incidentally, one of the leaders of the French Resistance, Misak Manushyan, was an Armenian.

We support any constructive steps aimed at objective coverage of historical events of those years and oppose attempts to interpret them subjectively.

Unfortunately, we saw attempts to that effect in Ilham Aliyev’s remarks. When I heard his assessments about Garegin Nzhdeh, to be honest, I remembered the personage in the well-known Soviet film “The Captive of the Caucasus” saying about the ruins of an ancient church: “I hope you don’t think that it was me to destroy the church, do you?”

An impression could be made from Ilham Aliyev’s remarks that Hitler did not play but a secondary role in this war, and Garegin Nzhdeh was the leader of the Nazi movement.

Many Soviet leaders died in the Vladimir prison. Solzhenitsyn was in the Gulag. So what? Should we consider everyone convicted in 1937-1950s as a people’s enemy? If so, what we should think of those prominent figures that were convicted and ended their days in prison? I consider it inappropriate to use this format to distort history, bring some tension into the atmosphere of this important gathering.

Coming to the Declaration that we are going to sign today, I would like to single out those paragraphs that emphasize the need for joint efforts to resume a broad international dialogue aimed at strengthening international security, against actions that contribute to the formation of dividing lines, distrust, tension and confrontation.

And I think that summits like this should be used to ease tensions between our peoples and countries, so that we find ways to dialogue, compromise, mutual trust and respect between our nations.

I believe that the words of the President of Azerbaijan are disrespectful, first of all, for the Armenian people. And I think this is also disrespectful to the heads of state and the peoples they represent here.

Dear colleagues, I apologize for such a strain. You saw that I am not the initiator.

In conclusion, I would like to once again thank the leadership of Turkmenistan for successful chairmanship and express hope for continued joint efforts to further improve and strengthen the ongoing multifaceted partnership within the Commonwealth.

I also wish to reaffirm Armenia’s readiness to provide all possible support and assistance to our Uzbek colleagues during their CIS presidency in 2020.

The meeting discussed a number of issues of cooperation within the CIS. The Declaration on Strategic Economic Cooperation was adopted. A number of documents have been signed: the Appeal to the peoples of the CIS countries and the world community in connection with the 75th anniversary of the victory of the Soviet people during the 1941-1945 war; the Convention on the transfer of penal sanctions not involving prison sentences; the Program of Cooperation in the fight against terrorism and other violent manifestations of extremism for 2020–2022; the Joint Statement on supporting practical steps to prevent the arms race in outer space.

President of Turkmenistan Gurbanguly Berdimuhamedov was awarded the medal of the Interstate Fund for Humanitarian Cooperation of the CIS Countries “For Merits in the Development of Humanitarian Cooperation.”
The meeting decided that the CIS presidency in 2020 will be assumed by the Republic of Uzbekistan. In addition, it was decided that the next meeting of the CIS Council of Heads of State will be in Uzbekistan.

The Prime Minister’s working visit to Turkmenistan is over. Later today, the Head of Government will be back to Yerevan.