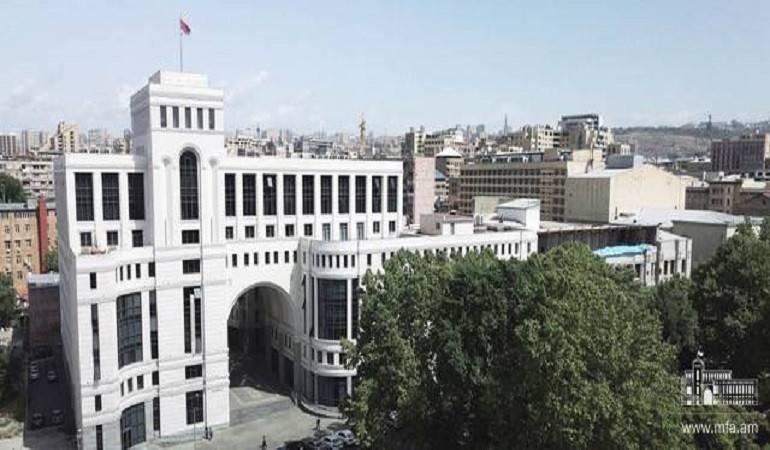 Armenia to Turkish President Erdogan: Stop the Lies and Distortions

This is an official statement released by the Armenian Ministry of Foreign Affairs.

In light of the further advancement of the international recognition of the Armenian Genocide, the President of Turkey recently made controversial statements, which distort the reality.

These statements contain claims aimed at justifying the Genocide by means of insulting the dignity of the victims. On April 24, 2019 the President of Turkey already attempted to justify the Armenian Genocide by qualifying it as “the most reasonable act” and referring to the victims of the Genocide as “Armenian gangs and their supporters”. All the more, presently the President of Turkey deprives the victims of the Armenian Genocide of their historic homeland by way of calling them nomads, thus forgetting the history of his ancestors and the indigenous people of the region.

Indeed, the recognition and condemnation of the Armenian Genocide is essential for serving truth and historical justice. However, today it is essential not merely for history and historians but rather for the entire humanity, and particularly the potential victims of the identity-based crimes. It is essential for all those persons and peoples who are accused of being terrorists simply because of their ethnic and religious origin and then subjected to violence and forced deportations by the Republic of Turkey in its neighbouring country. It is essential for overcoming genocidal perceptions and protecting the universality of human rights.

The Armenian Genocide is a reality for the descendants of the Genocide and the international community. This reality has also served as a basis for elaborating the 1948 Convention on the Prevention and Punishment of the Crime of Genocide and the subsequent mechanisms for the prevention of genocides and crimes against humanity.

By justifying and denying the Armenian Genocide, pursuing aggressive policies marked by the use of force against its neighbours, sustaining land blockade of Armenia for more than two decades and providing political and military assistance to Azerbaijan in the context of the Nagorno-Karabakh conflict, Turkey continues to be a security threat to the Armenian people, which survived the genocide.

Turkey should reconsider its current hostile policies against Armenia and the Armenian people, which may become the first step in overcoming the consequences of the Genocide and reducing regional threats.