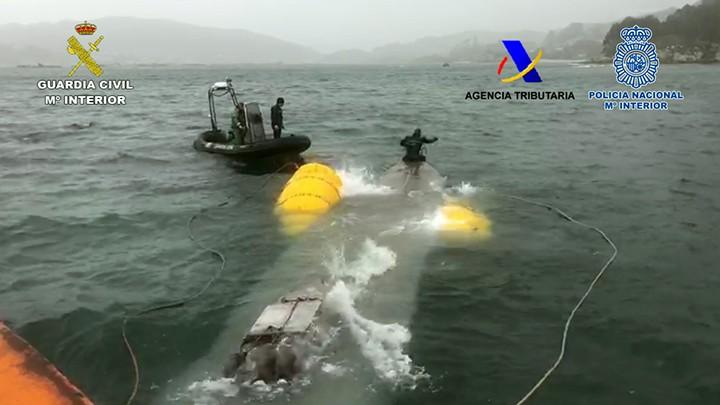 It’s an invention normally seen seen in South America, but British and Spanish police say they’ve intercepted a submarine carrying hundred of millions of dollars-worth of cocaine into Europe for the first time ever.

British police said on Thursday that they worked with authorities in Spain, the United States, Portugal and Brazil to make the bust over the weekend.

“We were able to support the interception of a 20-metre long submarine which was … found to contain more than three tonnes of drugs - cocaine - worth millions of pounds,” said Tom Dowdall, the deputy director of the National Crime Agency.

“For sure, some of those drugs were destined for the UK. So this is a hugely important find and has taken a significant amount of drugs off and away from the streets of the UK,” he said.

Spanish police said they were able to seize the submersible as its crew attempted to sink it. Bad weather prevented the suspects from transferring the drugs to another vessel so they tried to sink it near the coast and abandoned it.

“The maneuver was detected by a Guardia Civil patrol using night-vision goggles, who then noted the boat’s arrival point and the subsequent fleeing of its crew,” Spanish police said in a statement.

Two Ecuadorian crew members were arrested, and officials are searching for a third.

Sources speaking to Spanish newspaper El Pais said the group which organized the submarine must be “big, since just the submarine itself must have cost around €2.5 million (US$2.75 million).”

The vessel is said to have been built in Guyana, and operated “for years“ making “at least two trips a year,” El Pais reported.

It was discovered in the Galicia region, which has historic drug smuggling ties to Colombia.

Such “narco submarines” have mostly been found in and around South and Latin America.

In September, the US Coast Guard discovered a submarine carrying over $165 million-worth of cocaine off the coast of Colombia.