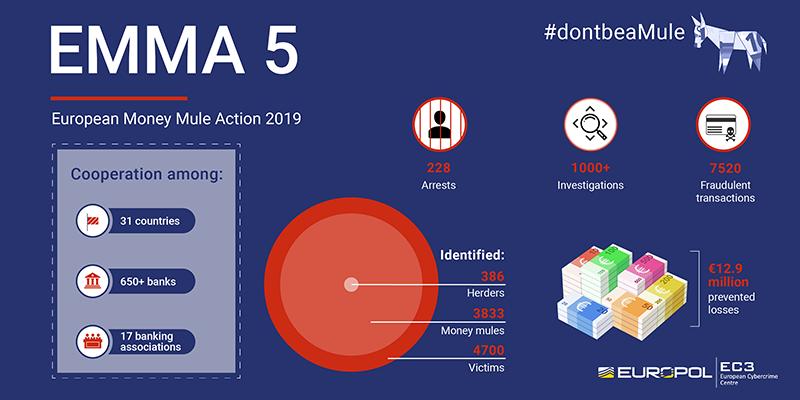 More than 200 people have been arrested in 31 countries following a three-month global investigation into money laundering, Europol said Wednesday.

The investigation, known as the European Money Mule Action, targeted those who help money launderers transfer funds. The action resulted in 228 arrests, as well as identifying 3,833 mules and 386 recruiters, the European police authority said in a statement.

Law enforcement authorities in Europe, Australia and the United States participated in the action, which have resulted in more than 1,000 criminal investigations being launched in the wake of the arrests.

The investigations have identified 7,520 fraudulent transactions and the seizure of 12.9 million euros ($14.2 million) between September and November.

A money mule is someone who receives receives money in their bank account from a third party, and they either transfer it to another party or withdraw it in cash and give it to someone else, often obtaining a commission for doing so.

“Even if money mules act unwittingly, they are committing a crime. Law enforcement will turn first to whoever’s name features on the bank account, and the legal consequences can be severe,” Europol said.

Authorities say there has been an increase in suspects using romance scams to ensnare money mules in their schemes.

“This year, cases involving romance scams were reported on the rise, with criminals increasingly recruiting money mules on online dating sites, grooming their victims over time to convince them to open bank accounts under the guise of sending or receiving funds,” Europol said.

This is the fifth year that Europol has conducted a global crackdown on money laundering. In 2018, 168 suspects were arrested and 1,504 money mules were identified during the action.

The law enforcement agency says criminals routinely target those under the age of 35, particularly those who have newly arrived in a country.

A 2016 investigation supported by Europol found that more than 90 percent of money mule transactions are linked to cybercrime.