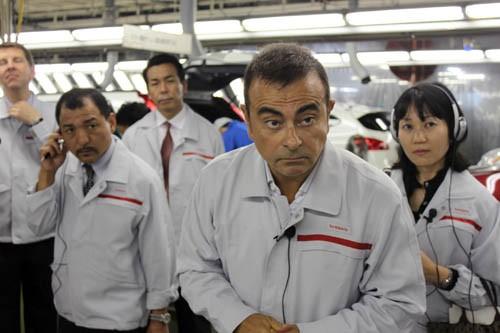 Carlos Ghosn, the ex-CEO of Nissan and Renault, refused during a press conference on Wednesday to explain how he managed to elude Japanese authorities in his recent Hollywood-style escape to Beirut, Lebanon, but said that he fled political persecution.

“I did not escape justice, I fled injustice and persecution, political persecution,” said Ghosn, adding that Japan’s hostage justice system was "inhumane" and " anachronistic."

The celebrity CEO was arrested in Tokyo for more than a year and accused of understating his income, irregularly spending 11 million euros (US$ 12.2 million) and directing $5 million of Nissan’s money to a car dealership he controlled.

Ghosn, however, told reporters in Beirut that his arrest was arranged by Nissan executives who were worried he would hand the carmaker over to France’s Renault.

The once hailed ex-CEO said he was now being depicted as a “cold, greedy dictator,” by the Japanese media.

"I was presumed guilty before the eyes of the world and subject to a system whose only objective is to coerce confessions, secure guilty pleas, without regard for the truth," in a country where the conviction rate is 99.7 percent, he stated.

He said he was held for months in a tiny cell without a window where lights were turned on around the clock. He was allowed 30 minutes outside per day, except on weekends and holidays, where a lack of guards did not allow for such a privilege. He said that he was denied prescribed medication and was only allowed a translator once a week to discuss the charges.

Ghosn has repeatedly denied the charges. He was released on bail in April and put under 24-hour video surveillance.

Then he suddenly disappeared at the end of December and reappeared in Lebanon.

Media said his escape started with Ghosn walking in plain sight onto a public bullet train to Osaka, where he boarded a private plane in an oversized piece of luggage usually designed for audio equipment. The box had air holes that allowed him to breathe.

The size of the luggage allowed him to take advantage of a security loophole that did not require it to go through any X-rays. Ghosn’s plane stopped in Turkey, where his box was then loaded onto another plane that took off to Beirut shortly after.

The Financial Times reported that he relied on the expertise of two American private security experts, one of whom was an Ex-Green Beret who had extensive experience rounding up hostages and had been jailed for charges of fraud years ago.

Despite Interpol’s red notice that requires Ghosn’s extradition back to Japan, this is unlikely given that Lebanon does not have an extradition treaty with Japan.

The Guardian reported that Ghosn, who grew up in Lebanon and holds Lebanese nationality, received aid from high-ranking Lebanese officials to ease his escape.

Meanwhile, Japan issued an international arrest warrant for Ghosn’s wife for giving false testimony last April, according to the New York Times. She is also in Beirut.

Since his escape, Bloomberg reports that Japan has tightened immigration procedures in order to prevent any future incidents of this nature in the future.

Ghosn stated he will clear his name and pursue justice.