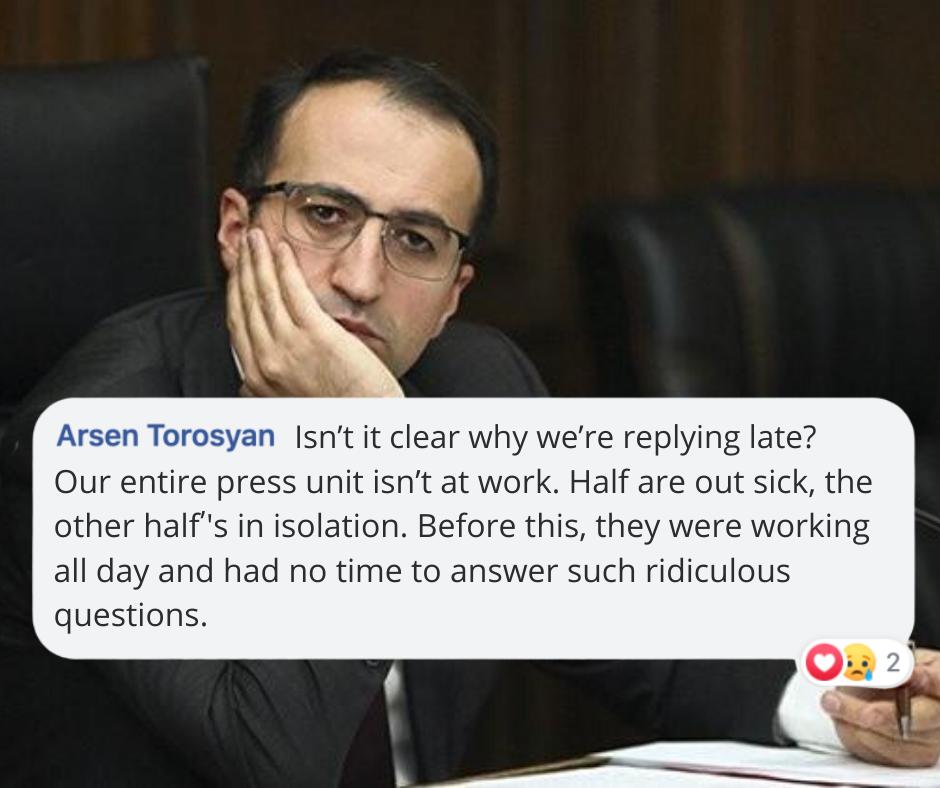 Armenian Minister of Health Arsen Torosyan has described questions posed by Hetq in a May 16 article regarding government allocated funds earmarked for Covid-19 related measures as “absurd”.

When the Covid-19 infection started to spread in Armenia, the Hetq team and I decided to create a database. We are not doctors, but we thought that if we collected that data in detail, it would even be possible to help prevent and plan actions.

Those working databases are aware of this and know that without data it is simply impossible to plan anything.

What data did we want to collect? In short, everything.

We sent inquiries to the Ministry of Health.

We wanted to know what countries the infected came from and when, the airline they used, their age and gender. We then thought about getting their blood type and place of isolation and residence. In all these cases, there was no need to disclose anyone's personal information, and we did not request personal information in our inquiries. By the way, it had to be done every day, because we knew that the data would change day by day, and it would become a huge database. I describe all this to make it clear how seriously we approached the issue.

However, we did not receive a response to our inquiries. The ministry only said a reply might be forthcoming in thirty days or so.

We realized that we had to drop the idea of compiling a database. The ministry had already started publishing some data, that had nothing to do with our database, and considered some of the information we requested as “personal” data, such as the sex of those infected. Later, the ministry itself started mentioning gender in its published data.

We then read about cases of fake and faulty medical supplies and equipment being shipped to various countries, much of it as humanitarian aid.

Armenia has also been the recipient of such humanitarian aid.  Thus, we asked the Ministry of Health to provide information the companies importing medical garb and equipment to Armenia and the source of the items.

We asked given the high rate of infection among medical personnel in Armenia. The ministry said it had no such data.

Following the hospital fires in Moscow and St. Petersburg (May 9 and 12), most likely caused by faulty ventilation machines, that killed five, we asked the ministry if similar machines had been imported to Armenia.

We wanted to know if any Russian ventilation machines had been imported to Armenia.

The ministry replied that no such inventory had been made.

Given the small number of such machines in Armenia, such an inventory could have been made in a few hours. It seems that no one in the ministry, Torosyan included, thought it was necessary to check.

Another question important for us taxpayers is how those funds allocated by the government for emergency relief are being spent.

At the beginning of this study, we recorded a strange fact. The last point of the decision made by the government on March 12 of this year states that the law has retroactive effect and refers to the purchases made since January 25. The decision covers purchases made from one person: those without a tender bid. We wanted to understand why the March 12 decision applies to purchases made after January 25. What purchases were made at that time?

When the infection had already spread in other countries, the Minister of Health did not take it very seriously and spoke publicly about it only a few times.

We want to know what purchases the government, made especially at that stage, that now must be included in the number of purchases from just one person.

The ministry has still not made these purchases public.

I’m still perplexed as to why Minister Torosyan regards these questions as “absurd”. Can we assume that he will evade all our inquiries by using similar subjective language?

Arsen Torosyan has insulted several of our journalists in a collective way. If the insult were directed to individuals, a lawsuit could be filed against the minister. But even in that case, it would be absurd to do so, because the number one official in the country is now the Minister of Health, and his steps and decisions depend on the development of the coronavirus in our country…. and it would be quite “absurd” to distract him.

jenny b. 2020-05-24 22:21:34
aï ,aï , aï !! this mister looks tired ! May be he is overcharged ! He should go in pension and let the place to a more active servant of Armenia, The land has a real right to be informed, warned , lead and guided into healthy/ medical security a minister is not apointed to reign but to serve .