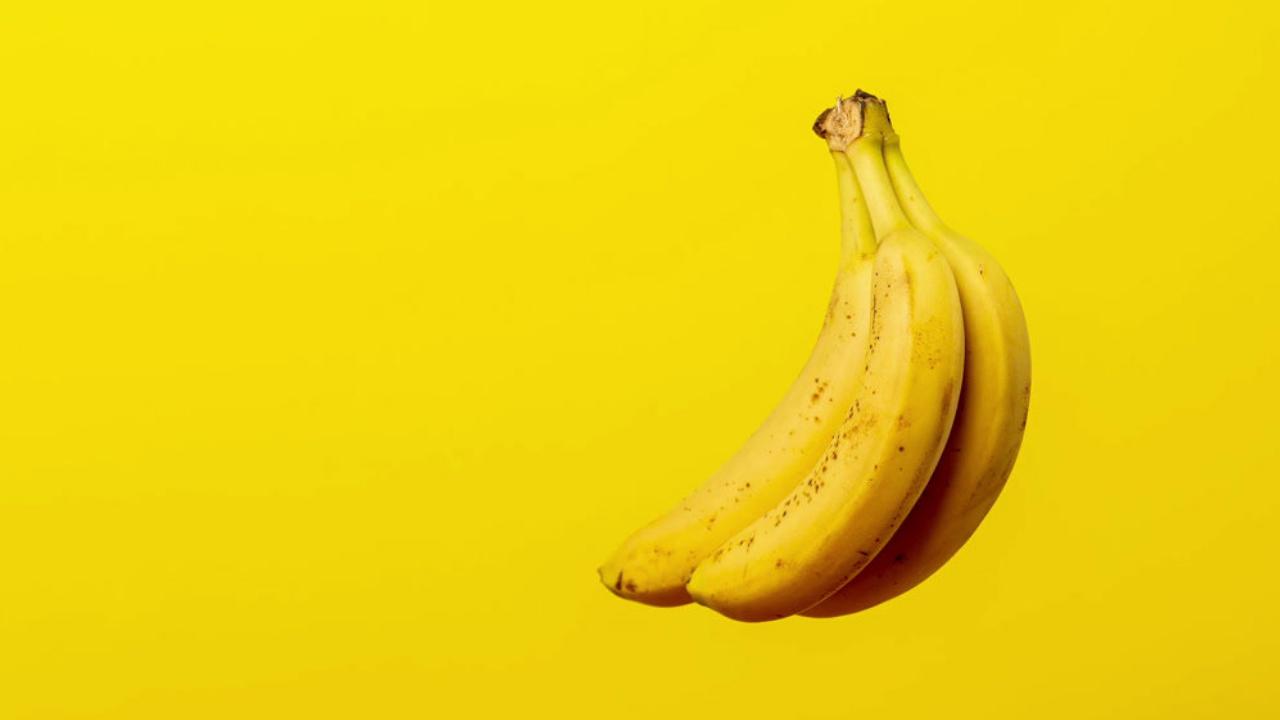 False news about the coronavirus is widespread throughout the world.

The term “infodemic” (information + epidemic) is often used to describe this phenomenon.

In addition to the false rumors circulating around the world, local stories have been created about the virus. We have tried to compare how websites that spread disinformation work in Armenia and neighboring Georgia, as well as to separately study the roots of these websites.

Most of the fake news about the coronavirus has been spread by clickbait websites, and the number of news websites with years of experience and a stable audience doing the same wasn’t small either.

Cloned websites were more active in spreading false news in the Georgian media. Closed fake websites use the name of famous periodicals, imitating the logo, and thus trying to gain the reader's trust.

For example, the reader may not know that the official website of the American CNN TV channel is cnn.com. Those reading the news on the website presscnnnews.ru, however, might be taken in by the name and, thinking it’s linked with CNN TV, accept its news as credible as well. In fact, it’s a cloned site. 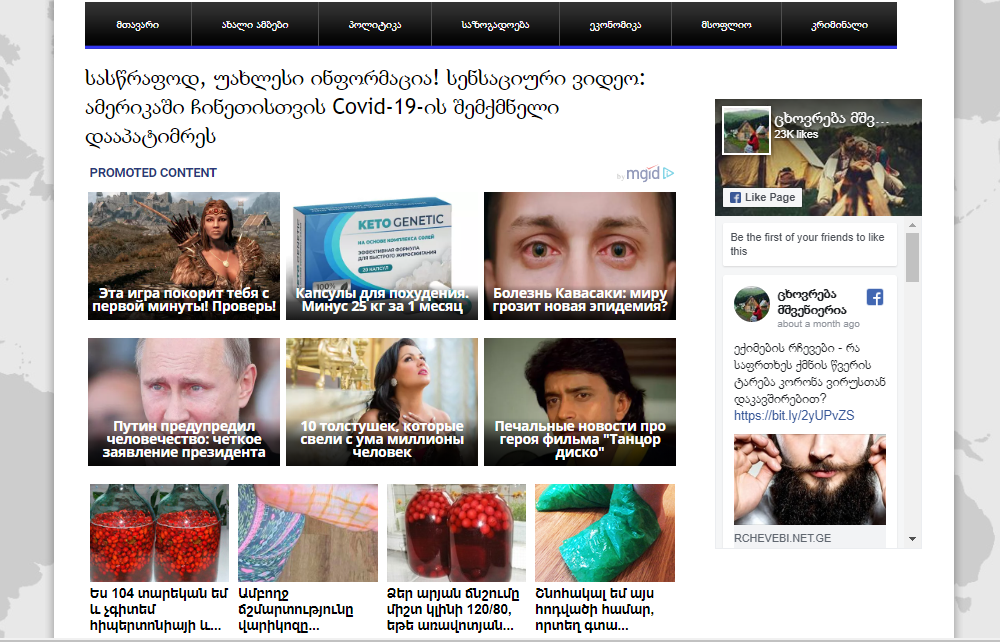 Referring to clickbait sites, those that generate false news, we should note that they do not have their own media content. They mainly distribute material taken from other sites. Clickbait sites make money through advertising, mainly via Google AdSense, so they try to secure as many visits as possible (clicks) and increase the number of visits through social networks. Clickbait sites usually use emotional or sensational “bait titles”.

The Coronavirus is an incredible topic for such sites. Since the virus has not been fully studied, any information can be circulated, and visits can be generated at its expense.

In the case of both countries, almost all click-through sites that spread misinformation have been registered for the last three years, in 2018-2020. Most of the sites did not have "about us" or "feedback" sections, where contact information would be indicated, and the purpose of the activity would be presented. 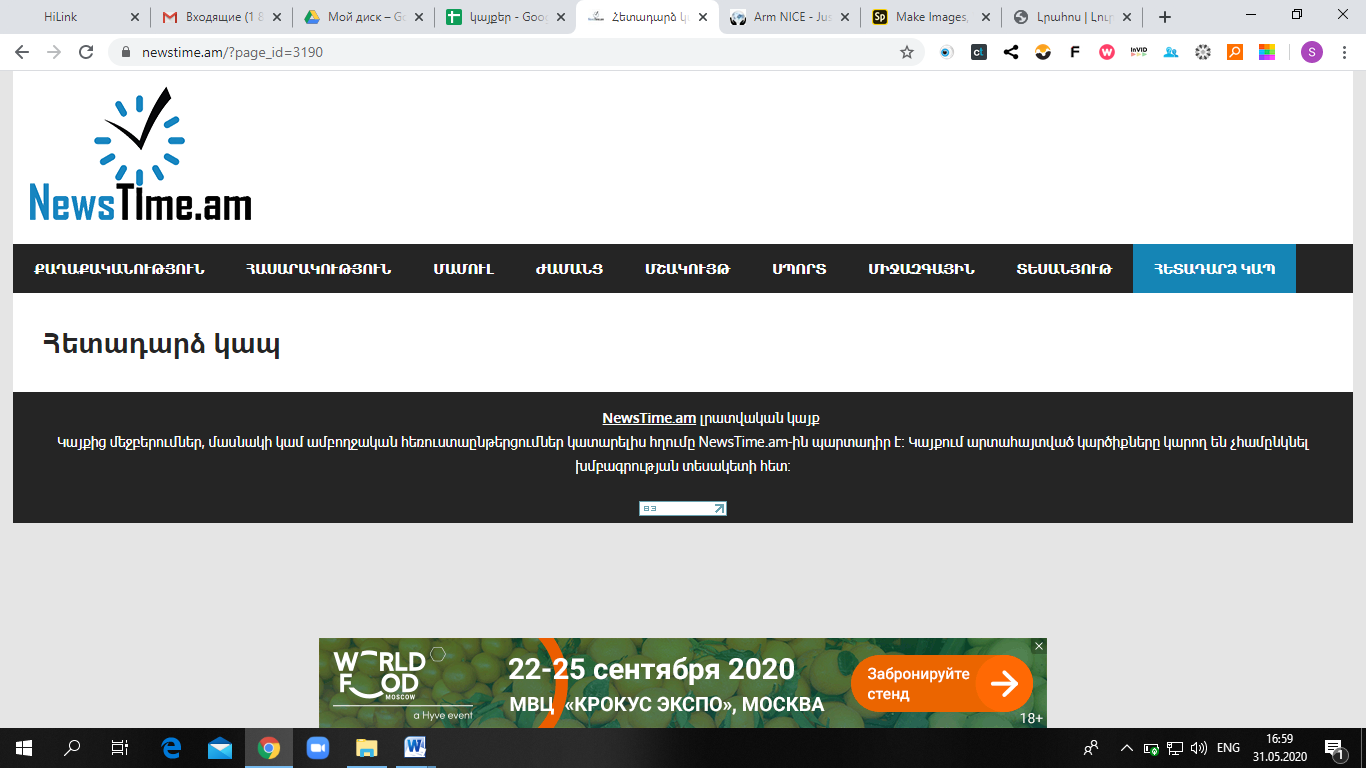 The fact that the main purpose of these sites is to guarantee visits can be seen from the results observed over several months. For example, the website tarm-lur.ru was registered in September 2019. According to SimilarWeb, visits to the site, which does not have its own media content, have increased every month. In October 2019, the site had 9,000 visits. In March 2020, the number of visits reached 150,000. At the same time, direct visits to the site accounted for an exceedingly small percentage – 3.35%. The site got 96.65% of visits through social networks, mostly Facebook.

In the same way, months ago, visits to the Georgian website wnews.ge, registered in November 2019, increased every month. Again, direct visits to the site accounted for a small percentage - only 1.93% Visits from social networks amounted to 97.66%.

Creating such websites requires minimal investment. However, the false news spread by these sites has a great impact on people. The IP addresses of the websites that spread the fake news we observed were not Armenian, they were all registered on servers in America, Russia and Germany. 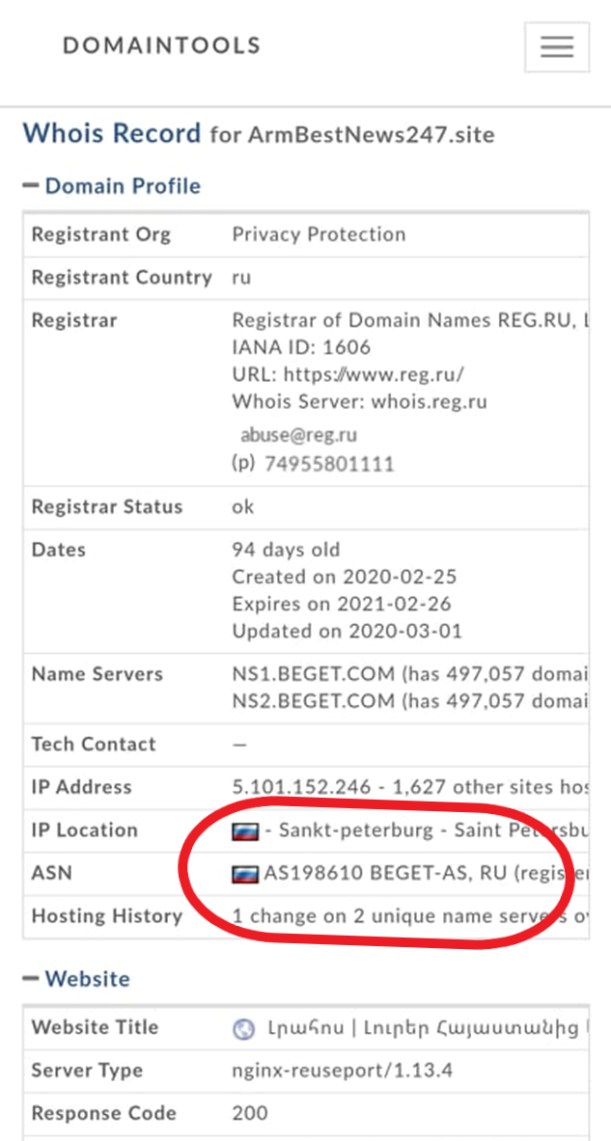 Lilit Khlghatyan, a psychologist by profession, later became interested in SEO (search engine optimization, SEO ensures the visibility of websites on the Internet) and wrote articles for various blogs.

According to Lilit, English content makes it possible to earn more money with Google AdSense than Armenian language content. Lilit created content only for the English-language website. She was merely asked to follow the news about the fashion world and prepare material in English. Later the website’s owner proposed that she also prepare content in Armenian. Witnessing the methods employed by the site, Lilit refused.

Lilit notes that there was a huge turnover of staff working on Armenian content because of low salaries.

"I can't say for sure how much the site owners earned since we've never talked about it before. But I've worked in that field and looking at the number of sites, I think they'll make at least $1,000 a month," Lilit says.

According to Lilit, websites that spread disinformation are registered on the servers of other countries as an insurance measure, making it exceedingly difficult to trace the real owners.

Doctors also spread false news about the coronavirus. Sopo Gelava, a researcher at the Media Development Foundation in Georgia, says doctors often spread false rumors about ways to prevent the virus or about discovering a vaccine.

"Representatives of the healthcare sector are trying to benefit from the virus by spreading such news. They advertise their products as a means of preventing COVID-19. Meanwhile, we know that a vaccine has not been found yet and many countries are working to create one,” says Gelava.

False news on the very same story have been spread via Georgian and Armenian news feeds.

For example, there’s the fake news about the coronavirus being introduced via the importation of infected bananas. There was the fake news about a scientist arrested in the United States for creating COVID-19 for China, and that the coronavirus was really a new biological weapon.  Such stories have spread to both countries, but the means of dissemination have been different.

Given the conditions of the epidemic, the work of fact checkers has become more difficult. In addition to keeping up with all the news, there is also the issue of evidence.

"There is news that it is simply impossible to verify. Thus, we often rely on the opinion of experts, scientists and doctors," said Nika Mamuladze, an analyst at Georgia's Reforms Associates (GRASS).

It should be noted that during this period, the false news published by the foreign press in the Armenian and Georgian news feeds were mostly taken from the Russian media.

The Turkish website kafkassam.com has also disseminated false information on the coronavirus.

The website is published in five languages, including Armenian, and has separate Armenia, Iran, Russia, Azerbaijan, and Georgia sections. kafkassam.com has operated since 2014 and is registered under the name of Hasan Oktay.

A Doctor of Historical Sciences and founder of the site, Oktay is a member of Turkey’s Nationalist Movement party. He visited Armenia in 2004. 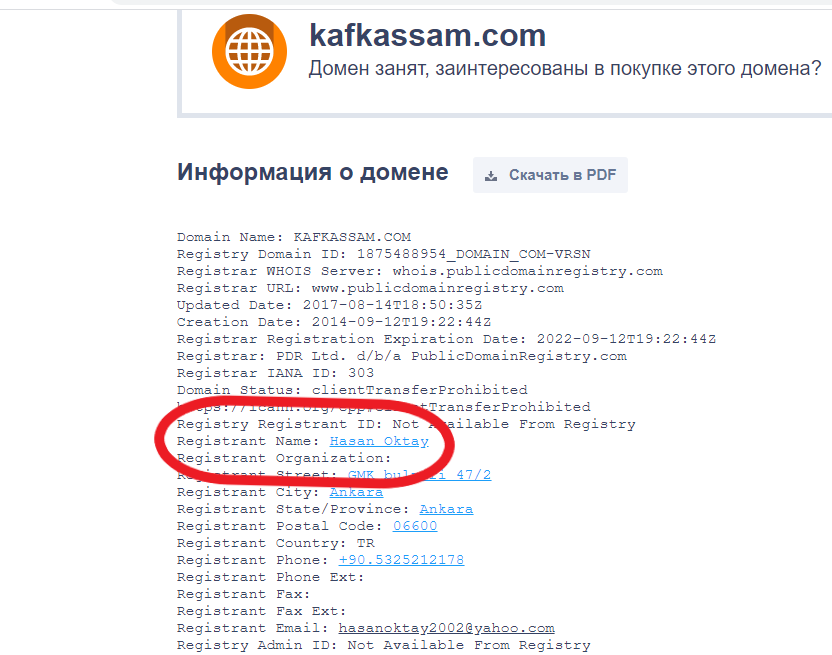 Here, readers can access more information on the websites disseminating false news on Armenian and Georgian news feeds about the coronavirus from its initial outbreak on December 31untill the present.

In addition to chronicling the spread of fake news about the virus in both countries, we’ve also included data on the dates of registration of sites that spread false news, IP address, direct visits, and visits to social networks.

The project was implemented with the financial support of the Multimedia Education Center. The views expressed in this article may not necessarily reflect the views of the funding organization.