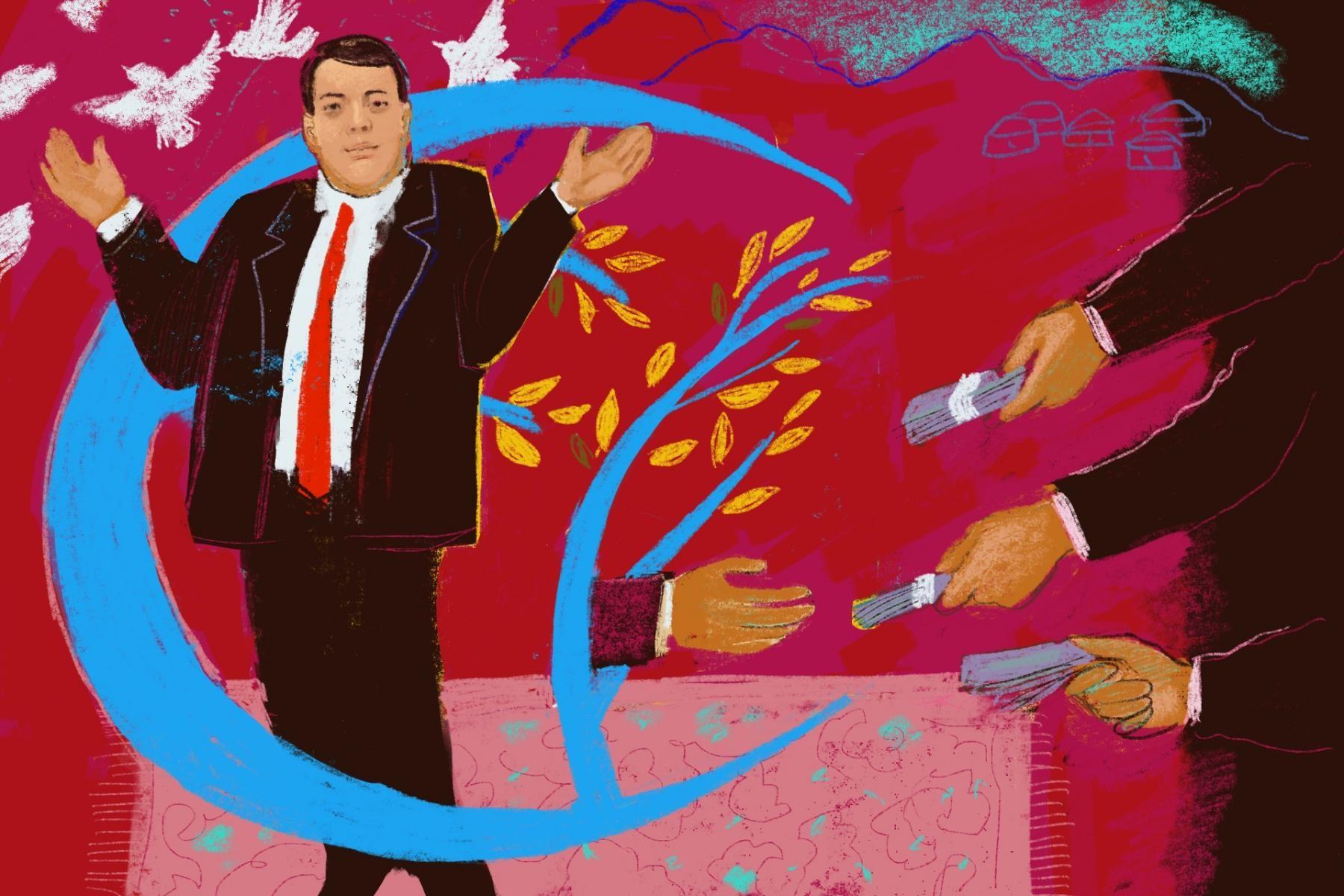 A charitable foundation run by Kyrgyzstan’s politically powerful Matraimov family received much more money than previously known from an underground network that laundered a vast fortune out of the country, according to newly revealed bank records.

The questionable funds represent nearly half of the $1.4 million in donations the Ismail Matraimov Charitable Foundation is publicly known to have received between 2014 and 2019.

The money appears to have originated in an underground cargo empire run by a Uighur family with the collusion of Kyrgyzstan’s customs service. The Matraimov family’s most prominent member, Raimbek Matraimov, is a former deputy customs chief who, according to an earlier investigation by RFE/RL, OCCRP, and Kloop, enabled and profited from the illicit business.

The investigation relied in part on materials provided by Aierken Saimaiti, a self-confessed money launderer, murdered in Istanbul in November, who had accused Matraimov of being instrumental in widespread corruption.

Saimaiti claimed to have laundered $700 million, the proceeds of the underground business, out of Kyrgyzstan — but also said that he and his wife had funnelled part of the proceeds to the Matraimov family’s charity, explaining that this money represented a portion of Raimbek Matraimov’s share of the spoils.

The Matraimovs have denied any links with Saimaiti, conceding only that his wife had donated $200,000 to their charity, allegedly on behalf of a businessman they have declined to identify. Iskender Matraimov, Raimbek’s older brother and a member of parliament, has said that the goal of the family foundation was to promote a “healthy lifestyle,” that the donations constituted zeket, a form of Islamic charity, that the donors were his “foreign friends,” and that they did not want their names to be disclosed.

After an initial RFE/RL investigation into Saimaiti’s money laundering was published last spring, the country’s financial police conducted a preliminary investigation that included a review of the donations the Matraimovs’ charity received.

The agency released a statement that included a list of what it called the organization’s only 10 donors between 2014 and 2019, identifying them by their initials. These donors transferred a total of $1.4 million to the foundation, the police said.

Newly obtained U.S. bank records reveal the identity of another three of these 10 donors. Though the Kyrgyz police had not publicly flagged these payments as problematic, and the Matraimov family has vigorously denied any impropriety, an analysis by reporters shows that all three had demonstrable links to Saimaiti and the money he laundered out of Kyrgyzstan.

The newly revealed transactions, totaling $470,000, include wire transfers from companies based in Turkey and Dubai that listed commercial reasons — such as “payment for textile” and “purchase of electronics.” Kyrgyzstan’s financial police has said that the organization “does not conduct any kind of commercial activity.” Saimaiti told reporters that he used a variety of companies to obscure the origins of money wired to the charity, including a company from the United Arab Emirates. As evidence, he gave reporters records of the wire transfer from Dubai. Their authenticity is now independently confirmed by the U.S. bank records.

Along with the $200,000 sent by Saimaiti’s wife, the newly revealed transactions bring the total sum the charity is known to have received through the money-laundering network to $670,000. This is nearly half of the total wired to the charity between 2014 and 2019, as stated by the Kyrgyz financial police.

One of the three newly revealed donors to the Matraimovs is a man named Dilsat Artis, a Turkish citizen who, according to the U.S. bank records, transferred $170,633 to the Matraimov foundation on October 19, 2015.

There is little public information about Artis. But Saimaiti described him as someone who does business for the Abdukadyr family in Turkey. A bank statement and a transaction spreadsheet provided by Saimaiti indicate that Artis appeared repeatedly in what he described as his money-laundering system. According to those records, Saimaiti sent a total of $2.35 million to Artis in 13 separate wire transfers in 2014-15. The bank account number listed for Artis in Saimaiti’s spreadsheet matches the one that appears in the newly revealed U.S. bank records.

Artis also appears to be involved in the business empire of the Abdukadyrs, the family whose money Saimaiti was laundering. A separate bank statement provided by Saimaiti shows that, in 2014, Artis deposited tens of thousands of dollars into the bank account of Palvan Insaat Turizm, a key Abdukadyr firm in Turkey, and that he received multiple payments from the company as well.

Reached by reporters, Artis said he had a long-standing business relationship with the Abdukadyrs. Hhe had learned about the Matraimovs’ Kyrgyz foundation while living in Istanbul, and that his wire transfer to the organization represented zeket, a charitable donation encouraged in Islam.

He also described himself as a long-established businessman who did frequent business in Central Asia and said the payments he received from Saimaiti were for goods and services on behalf of customers. Reporters could find little evidence of any significant business activity by Artis in the region at the time the payment to the Matraimov family was made. The two Turkish companies he owned at the time appeared to have no web sites.

There is one notable exception: In December 2018, Artis established a new company that soon acquired a 30-percent share in an Uzbek company behind a controversial $430 million development project in Tashkent. The BBC’s Uzbek service reported officials saying that local residents would be evicted from their homes to make way for the project. Artis did not respond to subsequent questions about the nature of his investment.