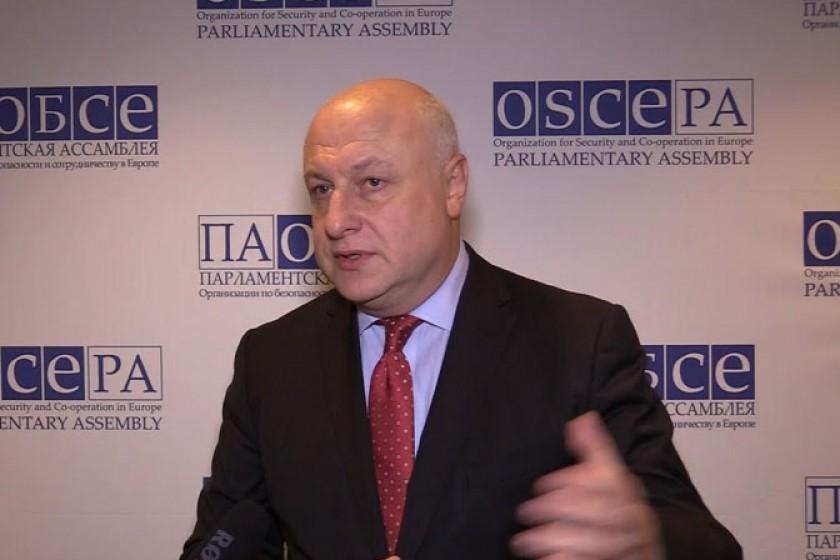 The following was released by the OSCE PA International Secretariat

COPENHAGEN, 16 July 2020 – OSCE Parliamentary Assembly President George Tsereteli has closely followed the situation along the border of Azerbaijan and Armenia and has been in contact this week with the countries’ OSCE PA delegations and relevant international actors. Today, he urged both sides to urgently de-escalate and to engage in “substantive negotiations.”

Following a conversation with Ambassador Andrzej Kasprzyk, the Personal Representative of the Chairperson-in-Office on the conflict dealt with by the OSCE Minsk Conference, President Tsereteli expressed deep concern over recent armed clashes, with casualties inflicted on both sides and heavy weapons used. Expressing appreciation for the update on developments on the ground offered by Ambassador Kasprzyk, President Tsereteli noted that these incidents constitute the gravest ceasefire violations since 2016.

“This week’s armed clashes are a serious escalation of the conflict and could threaten the peace negotiations that have taken place under the auspices of the Co-Chairs of the OSCE Minsk Group,” President Tsereteli said. “I encourage the sides to make use of all tools of de-escalation, including existing direct communication channels as well as informal channels of communication offered by the OSCE PA.”

The President expressed the PA’s full support for the Minsk Process, including the work of the Co-Chairs and the Personal Representative of the Chairperson-in-Office, and recalled UN Secretary General Antonio Guterres’s recent call for a global ceasefire in light of the COVID-19 pandemic.

“As I stated in April following the OSCE PA Bureau’s endorsement of the global ceasefire call, the last thing we need during this period is armed conflict to complicate efforts to contain the pandemic,” said Tsereteli. “Now, unfortunately we see this conflict between Azerbaijan and Armenia heating up. This is creating a much more severe condition for ordinary people, who too often are the ones who suffer most in war.”

He noted that both border areas where clashes have taken place are home to several settlements, increasing the risk of civilian casualties. The President urged the return of monitors, as the pandemic conditions permit. “Strengthening monitoring capabilities is important in order to establish facts and prevent incidents,” Tsereteli said.

The President has exchanged correspondence this week with the Azerbaijani and Armenian delegations to the OSCE Parliamentary Assembly and on Monday tweeted that he is deeply concerned over the ceasefire breach, urging immediate de-escalation and resumption of negotiations.

OSCE PA Secretary General Roberto Montella stressed the role of parliamentarians in confidence building and conflict resolution. “The OSCE Parliamentary Assembly will continue to create opportunities, within its mandate, to lend its contribution towards fostering result oriented inter-parliamentary dialogue between Azerbaijan and Armenia,” Montella said. “It is important that parliaments, through their national delegations, continue to use the Assembly as a complementary platform while also working towards preparing the population for peace.”