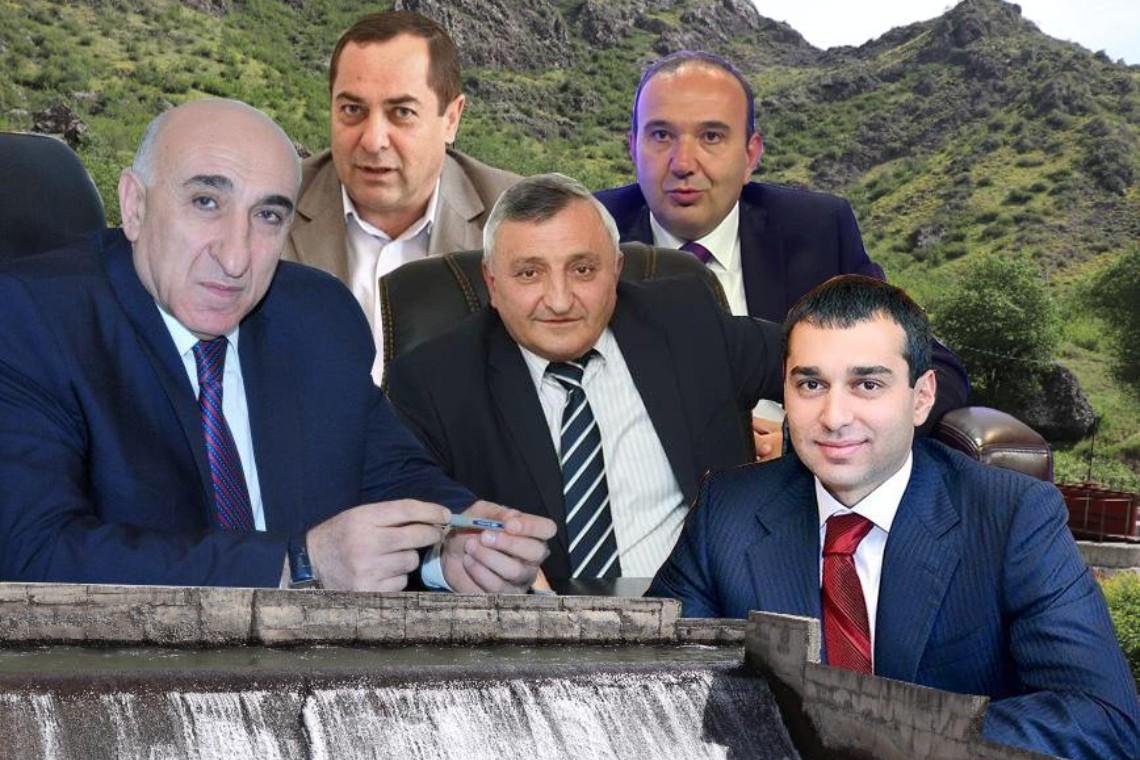 Former and current officials of Armenia and Artsakh are shareholders of companies operating hydro-power plants in Artsakh. Many of them are no longer officials, but they started to get involved in the hydro-power business during their tenure and remain owners of hydropower plants.

Here, we present the owners of operating hydropower plants in Artsakh’s Kashatagh Province.

Sixteen out of the 31 operating hydro-power plants in Artsakh are in Kashatagh. Another nine are being built. 9 of them are under construction. Most hydropower plants in Artsakh are located on the 75 km long Aghavno River, which flows in the northwestern part of Kashatagh. Nine are now operating on Aghvano and two more are under construction. The first plant operation license in Kashatagh was issued in 2011.

Who owns what in Kashatagh?

Energo Group LLC, registered in 2017, operates own plant in Kashatagh and is building three more 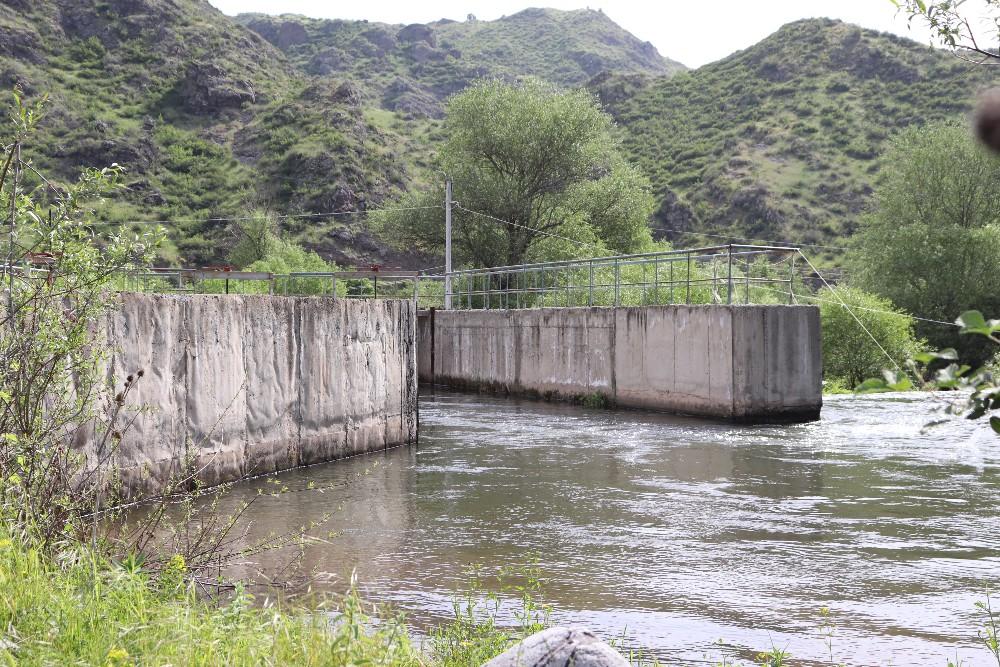 The shareholders of the company are high-ranking officials of the Electric Networks of Armenia (ENA) CJSC.

Lusine Ghasaboghlyan, the principal of the Vardges Petrosyan school, owns 33.4%   of Kaytsaghbyur LLC. She is the wife of ENA Board of Directors Chairman Karen Darbinyan.

The other 33.3% shareholder is Nelli Harutyunyan, the wife of ENA General Director Karen Harutyunyan.

The remaining 33.3% belongs to Narine Amiryan. She’s the wife of Andranik Khachatryan, who has held various state positions in Artsakh over the years. Andranik Khachatryan was the Chairman of the State Committee of the Real Estate Cadastre of the Republic of Artsakh, Minister of Agriculture, and Minister of Economy (2015-2017). Khachatryan now serves as the General Director of Artsakhenergo CJSC, a company mainly engaged in the distribution and sale of electricity.

The director of the company is 26-year-old Sergey Harutyunyan. He is the son of Karen Harutyunyan, General Director of Electric Networks of Armenia CJSC. 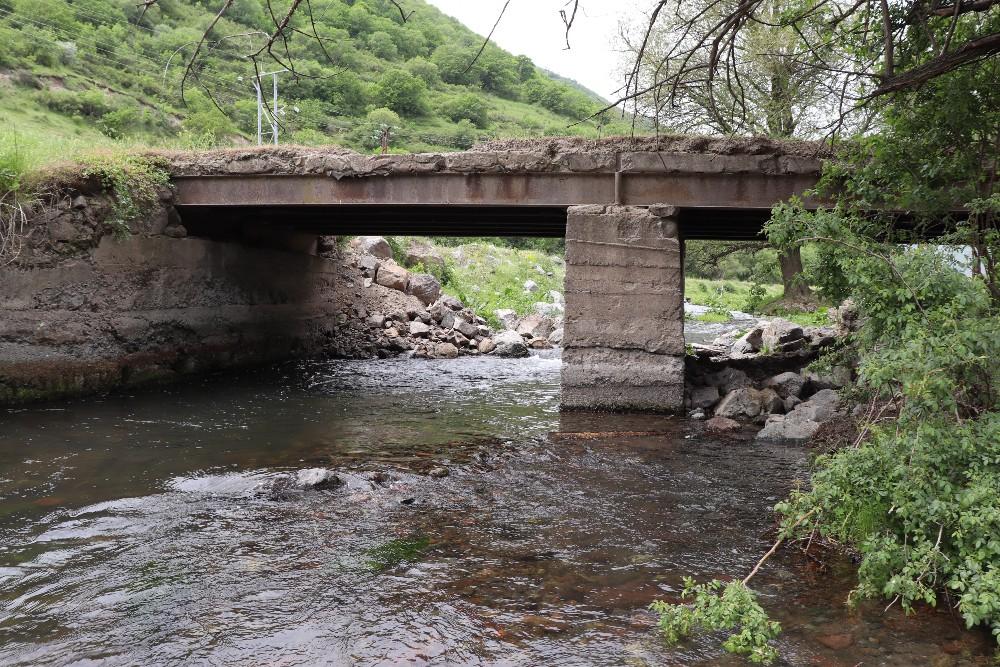 Kaytsaghbyur 2 is the most powerful hydro plant in Kashatagh, with an installed capacity of 11,152 megawatts (MW) and an average annual production of 55.78 million kilowatts (KWh). The plant’s operation permit was issued in December 2019 for a period of 15 years.

This company, founded in 2015, also operates a plant on the Aghavno River.

According to the Zhoghovurd newspaper, Nairi Bakhshyan is a classmate of former Armenian Prime Minister Hovik Abrahamyan.

The average annual production of the KarHas plant is 19-763 million KWh.

This company also operates a plant on the Aghavno River

The company, registered in 2006, was founded by former Berdzor Mayor Artur Sahakyan. Imast LLC received a permit to operate the plant in 2015, until 2030. The average annual production of the HPP is 14.3 million KWh.

This company operates the Hochants-1 hydro plant on land belonging to the Mshen and Hochants communities. 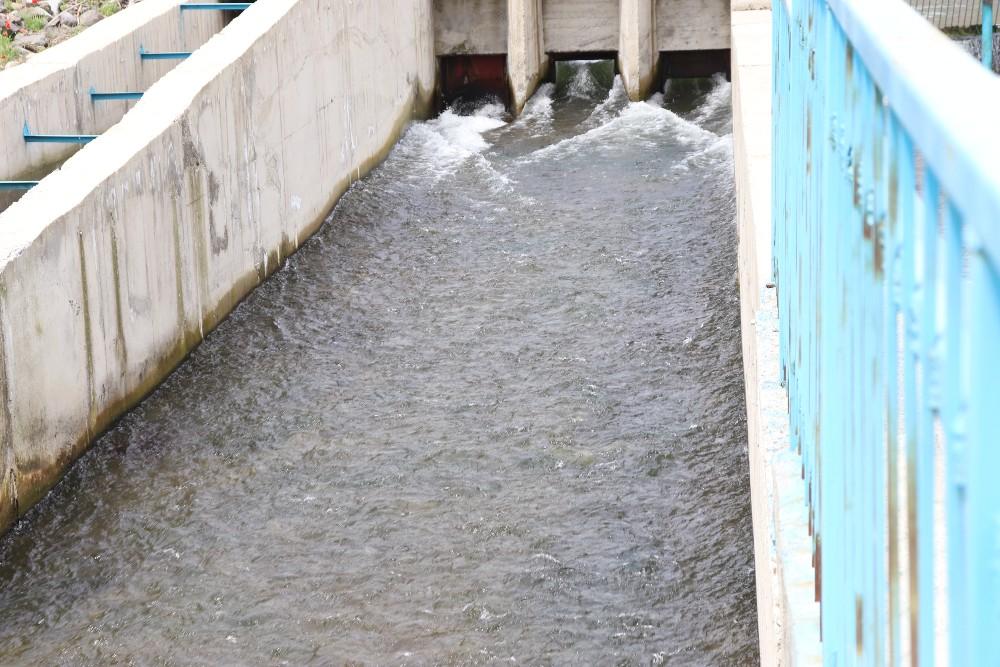 In the southern part of Kashatagh, Komitas Karapetyan (a former representative of the former President of the Republic of Artsakh for Special Assignments), and high-ranking officials of the Zangezur Copper and Molybdenum Combine operate the Hagari-2  hydroelectric power plant under the names of their wives.

One of the shareholders of the company is Armenuhi Ghukasyan, the wife of the General Director of Zangezur Copper and Molybdenum Combine Mher Poloskov. She owns 25% of the company.

The other shareholder is Elizabeth Petrosyan, wife of Vahe Hakobyan, a former Governor of Syunik who sits on the board of directors of the Zangezur Copper and Molybdenum Combine. She owns 25%

A license for the operation of this plant, located in the territory of Aghanus-Tzaghkaberd communities, was issued in December 2019. The permit runs until 2034. Its installed capacity is 8․04 MW, the average annual production is 45-82 million KWh.

The company was founded in August 2016. Vardan Khachatryan, who owns other power plants in Artsakh, serves as company director.

Businessman Gorg Khachatryan and his wife Armine Asatryan owns 100% of the company shares.

The company, registered in 2014, was founded by businessman Sergey Musayelyan and Mary Karapetyan, wife of Komitas Karapetyan, a former head of Artsakh’s Department of Environment and Natural Resources. 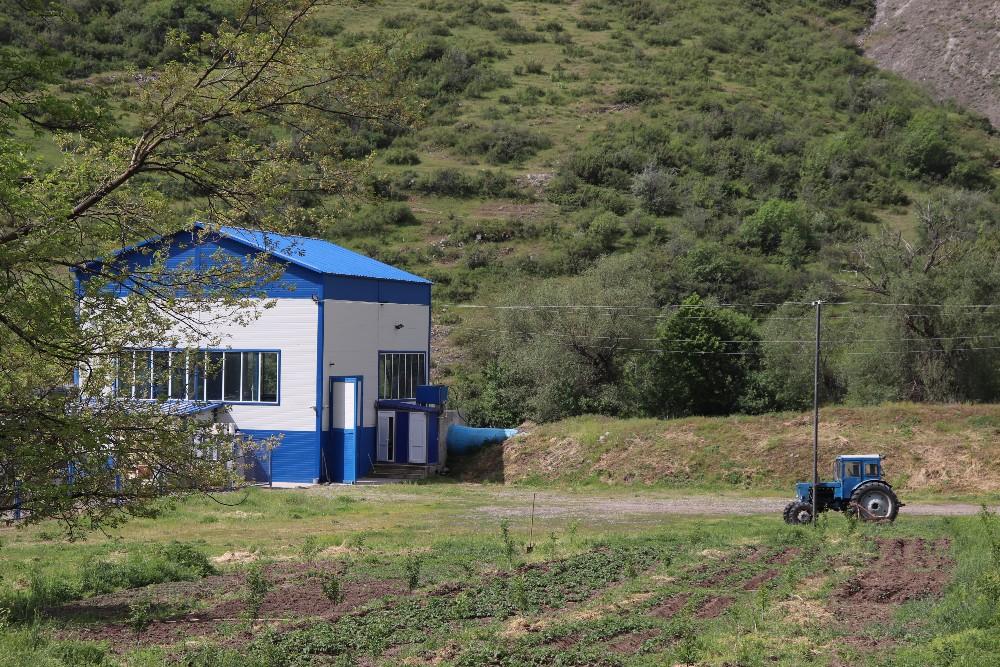 Gevorg Khachatryan is the brother of Vardan Khachatryan, who was a co-owner with Sergey Musayelyan of Tartar Energy, a company operating a hydropower plant in Artsakh’s Shahumyan Administrative District. 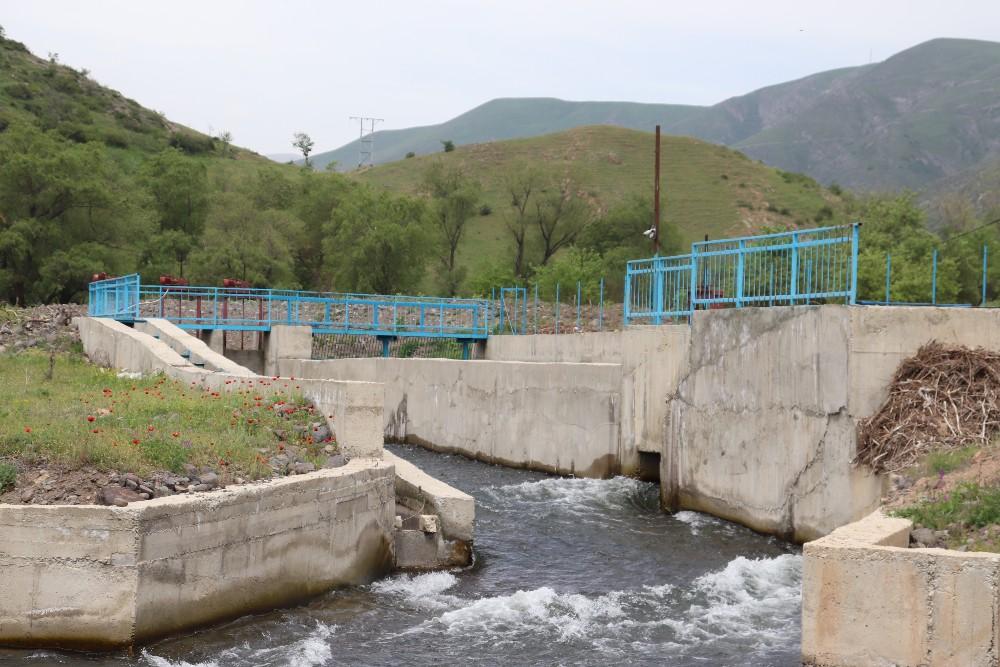 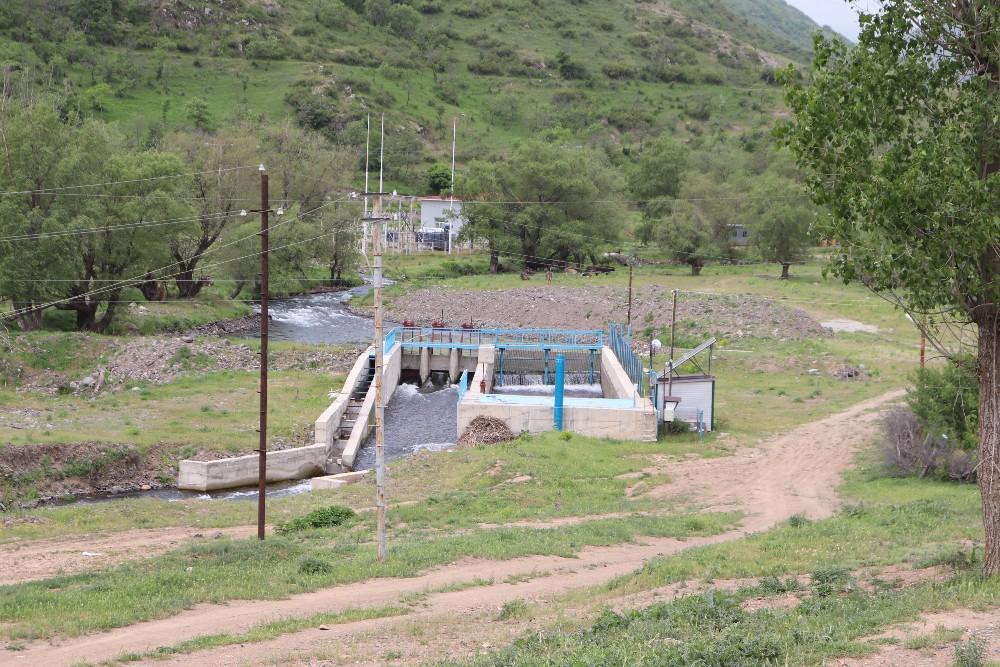 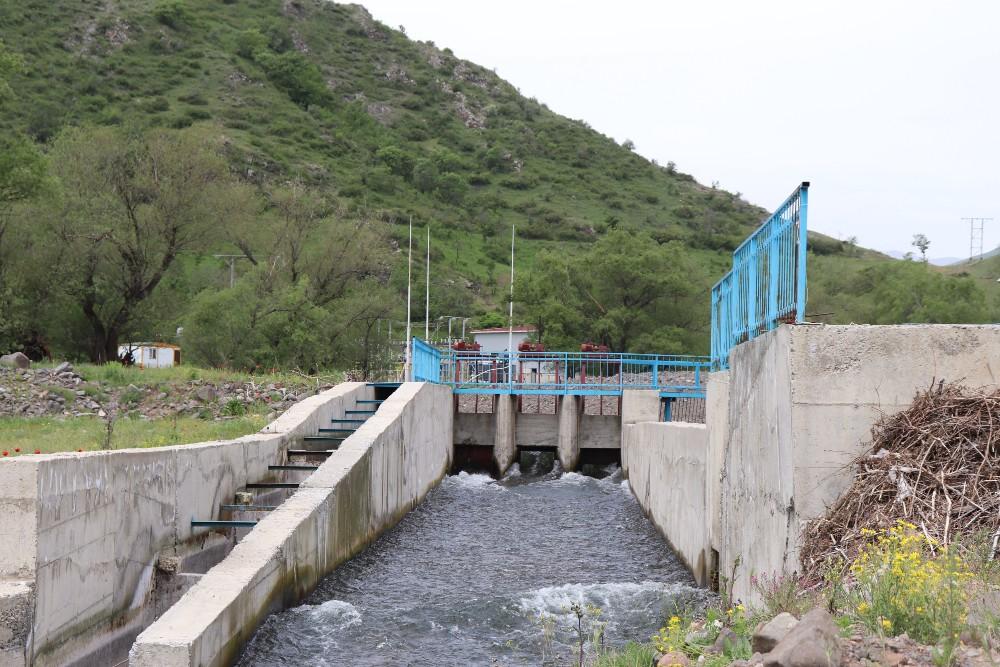 The installed capacity of the Aghavno plant is 4,525 MW. The average annual production is 37.99 million KWh. An operation permit was issued in March 2018, until 2033.

Harayer Sughmunyan, the founder and president of the well-known company Capriole Construction, which specializes in civil, industrial and military-industrial construction in Dubai, owns 7.5%. Sughmunyan is also a shareholder of hydro-power plants operating in the Shahumyan District and on the Martsiget River in Armenia’s Lori Province. 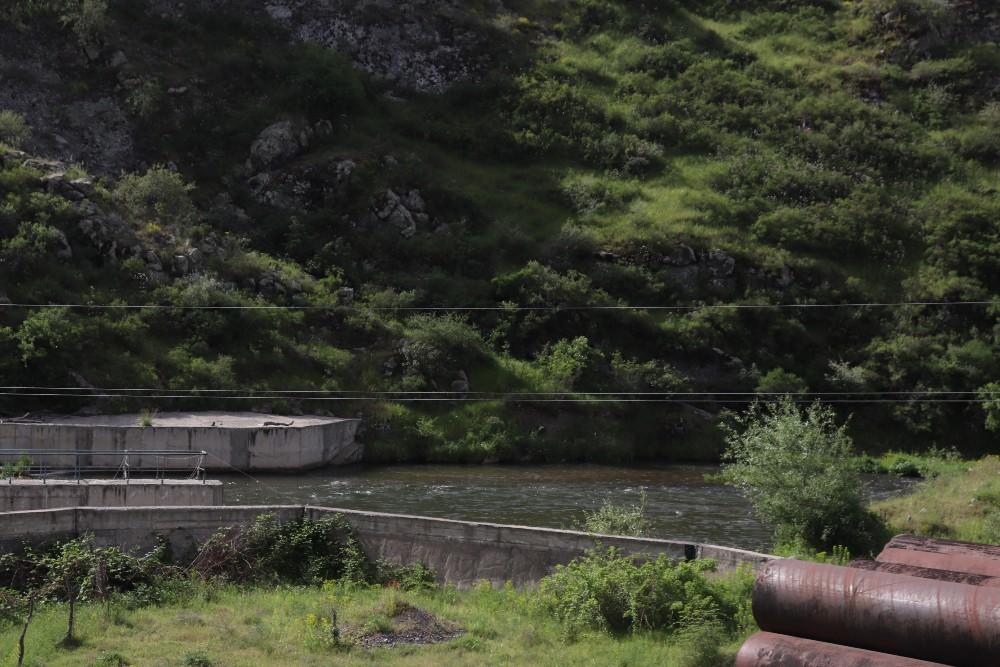 The director of Izotop Delta is Hakob Matilyan, a member of the ARF Supreme Body and a former Armenian Deputy Minister of Nature Protection.

Syunik-1 was the first hydro plant built in Kashatagh. It received an operation permit in 2011 until 2026. The average annual production of the plant is 18.25 million KWh.

The company was founded in July 2010 by Leon Mkrtchyan and David Lokyan.   Hakob Matilyan serves as company director.

The plant’s average annual production of the HPP is 18.3 million KWh.

Since it’s closed joint-stock company, we can’t get a list of shareholders since Artsakh’s State Register of Legal Entities does not keep a register of CJSCs.

However, glancing at the financial declaration of Armenia’s Central Election Commission (2018), it becomes clear that Hakob Matilyan has a dividend (share) in Proton of 3,960,000 drams, and his salary was 4,200,000 drams.

"One can say that it is a purely political position issue. It’s to assure the people here that we are behind them, that the Diaspora is behind them. It comes with mutual trust. In other words, the Karabakh authorities guarantee that these territories are ours and will remain so. That the people are here and will stay. They should do everything possible from the Diaspora so that the people can stay and multiply.”

The plant was opened on May 18, 2012 to mark Berdzor Liberation Day. High-ranking officials of Artsakh and Armenia were present at the opening.

This company, founded in 2011, operates the Syunik-3 plant on the Aghavno River. The plant has been in operation since 2013 with an average annual production of 13.9 million KWh.

Because it is a CJSC, we can only know the names of the company's founder and director. Hakob Matilyan, a member of the ARF Supreme Body, who was an Armenian Deputy Minister of Nature Protection, serves a director.

This company operates the Syuink-4 hydro plant on the Aghavno River in the Moshatagh community.

High-ranking ARF representatives and former Armenian officials are operating another HPP on the Aghavno River. 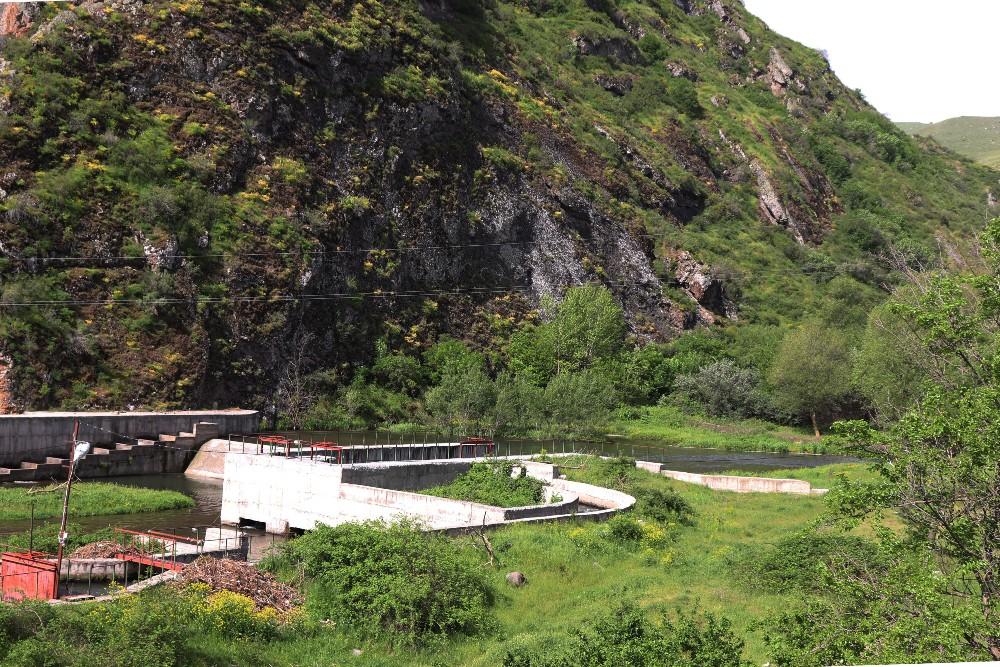 The director of the company is Suren Doshoyan. 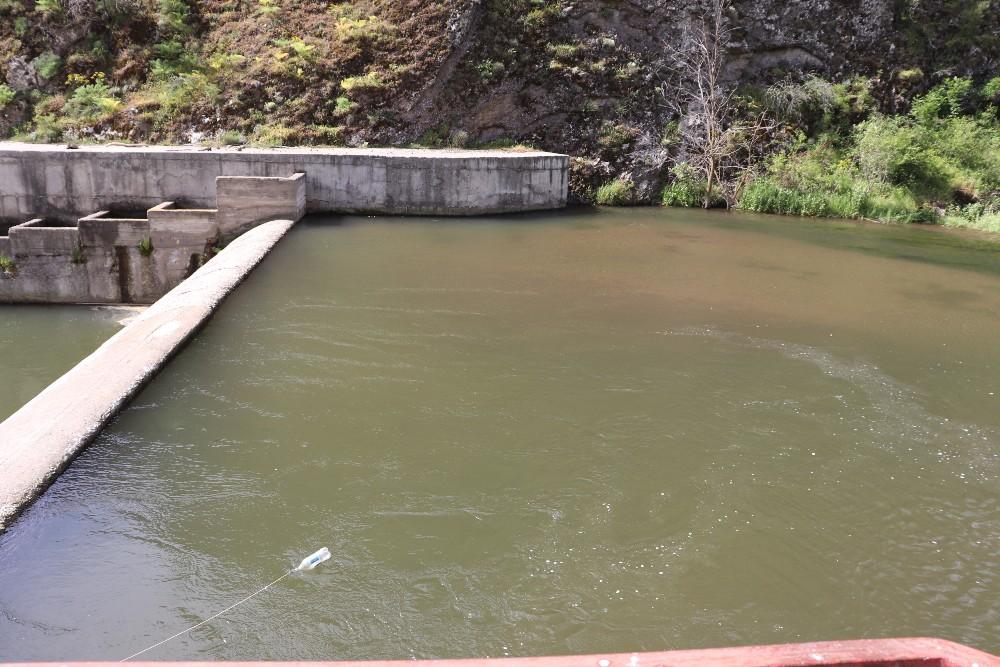 This company operates the Hochants-3 hydro plant on the Drakhtadzor River. The plant’s average annual production is 26-59 million KWh.

Angela Asryan and Donara Kasyan founded the company in 2017.

Donara Kasyan is the wife of the former head of the Shushi District Administration Vladimir Kasyan.

This company operates the Syunik hydro plant in south Kashatagh, near Doghar village, on the Vararakn River, a Vorotan tributary. 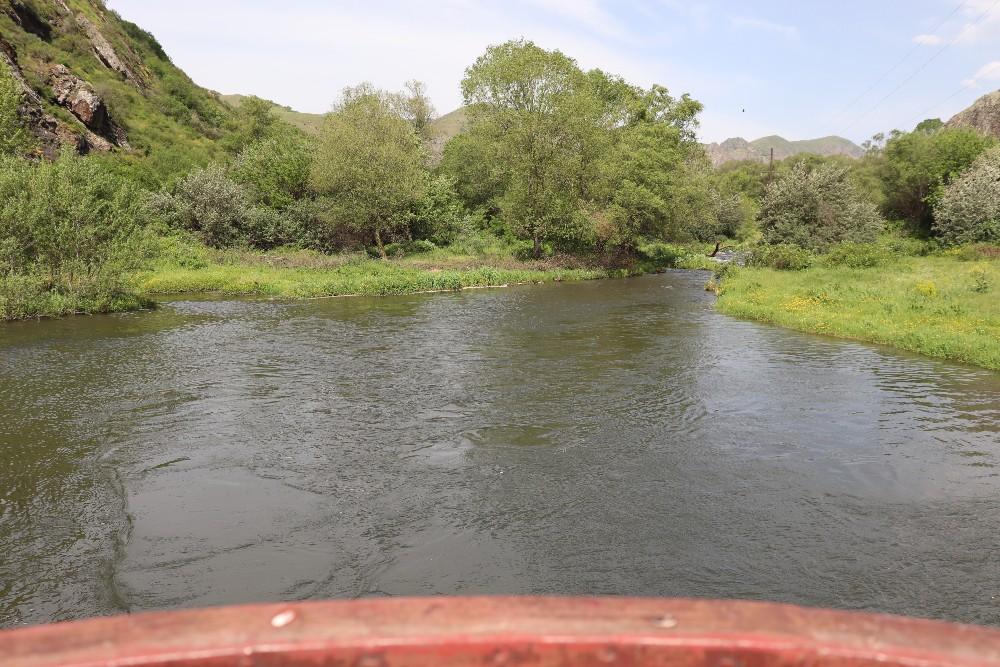 Lusine Gorgyan is the wife of the former commander of the 2nd officer battalion of the Armenian Traffic Police, Police Colonel Aram Galstyan. Galstyan was fired in May 2018 on orders of then Chief of Police Valeriy Osipyan. Galstyan worked in the traffic police system for many years. The couple lives in Goris.

The plant’s the average annual production is 4-78 million kWh.

The names of the current owners of the company are unavailable since Artsakh does not maintain a register of CJSCs.

The director of Himnakar CJSC is Arthur Hayrapetyan. Responding to a Hetq inquiry, Hayrapetyan said their names are not a secret but that he doesn’t know them. Local residents say that Arthur Hayrapetyan is the cousin of Artsakh President Arayik Harutyunyan, but Hayrapetyan denied having any friendly relationship with the president.

Himnakar CJSC received an operation permit for Berdik in April 2018, until 2033.

Himnakar CJSC operates two plants since it acquired Tartar Energy LLC in July of this year, which operates the Lev-2 plant in Shahumyan.

This company operates the Akounk hydro plant on the Spitakajour River. The average annual production is 0․475 million KWh.

The sole owner is Narek Karapetyan, the son of Masis Karapetyan, the former head of the 41-resident Lernahovit community. The company was founded in 2016, in the same year it received an operating license until 2031.

Vahram Galstyan, a physics teacher at the Moshatagh school, says trout in the Aghavno River have almost disappeared in recent years. 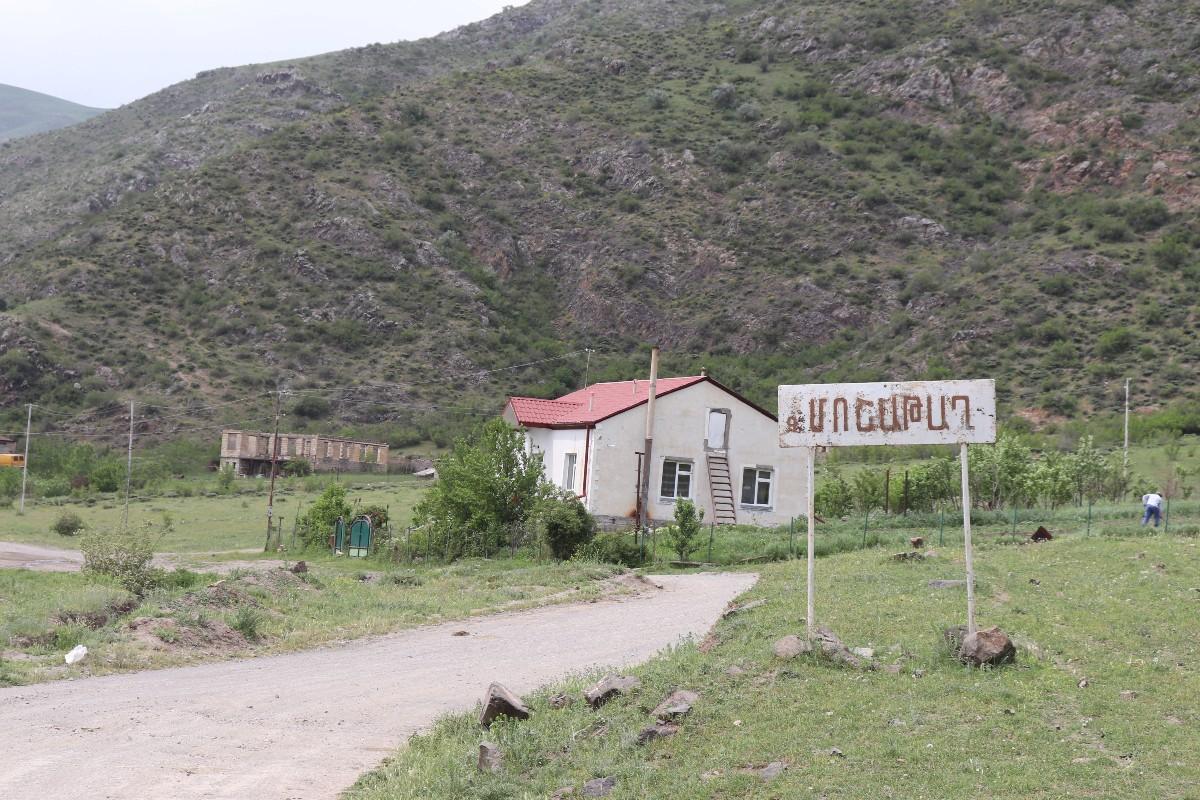 Galstyan is concerned that each hydro plant draws a lot of water from the river.

"There are fish registered in the Red Book in the rivers, which do not have the opportunity to reach their spawning grounds," says Armen Aghayan, a member of a commission assessing the impact of small hydropower plants in Artsakh on the environment. 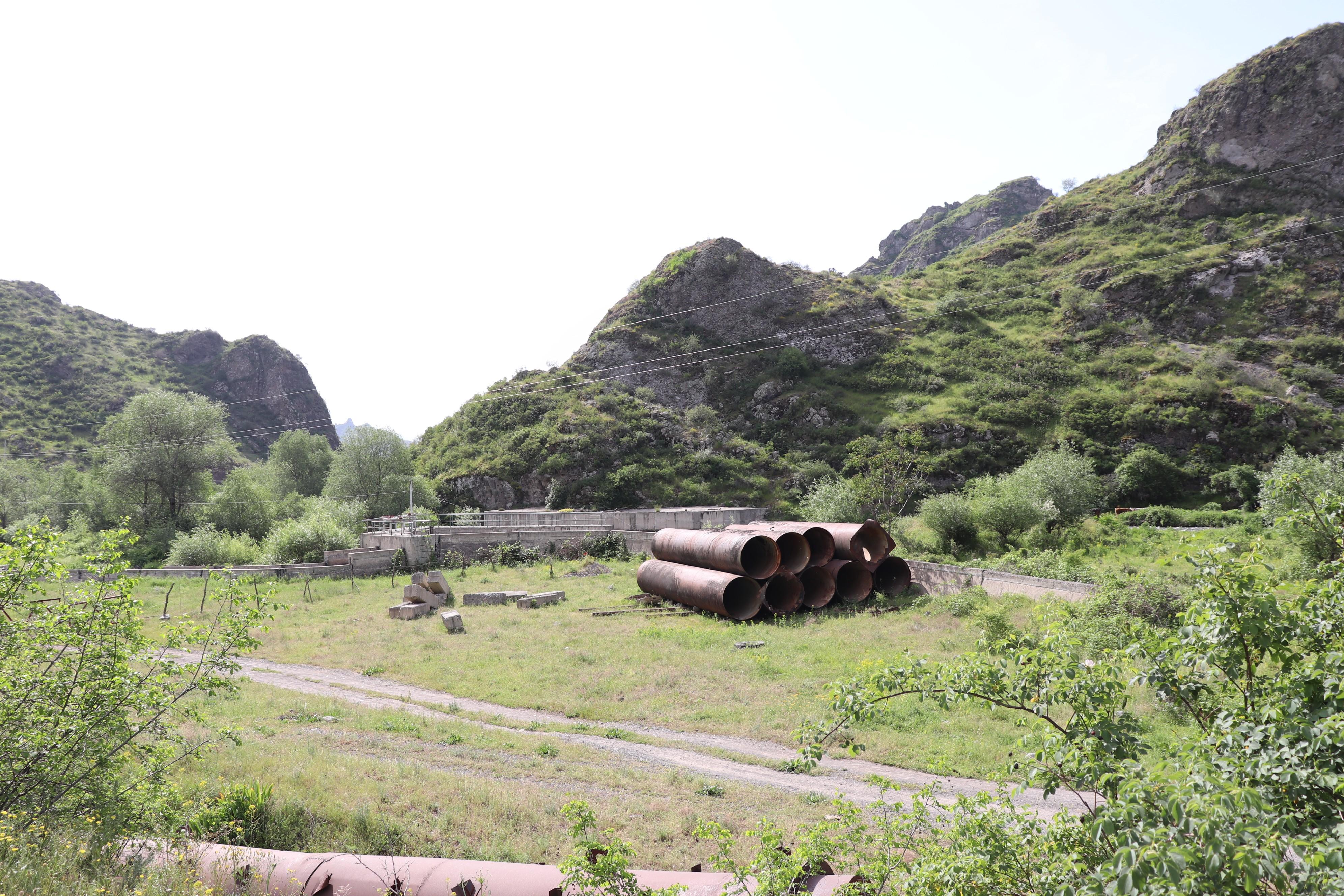 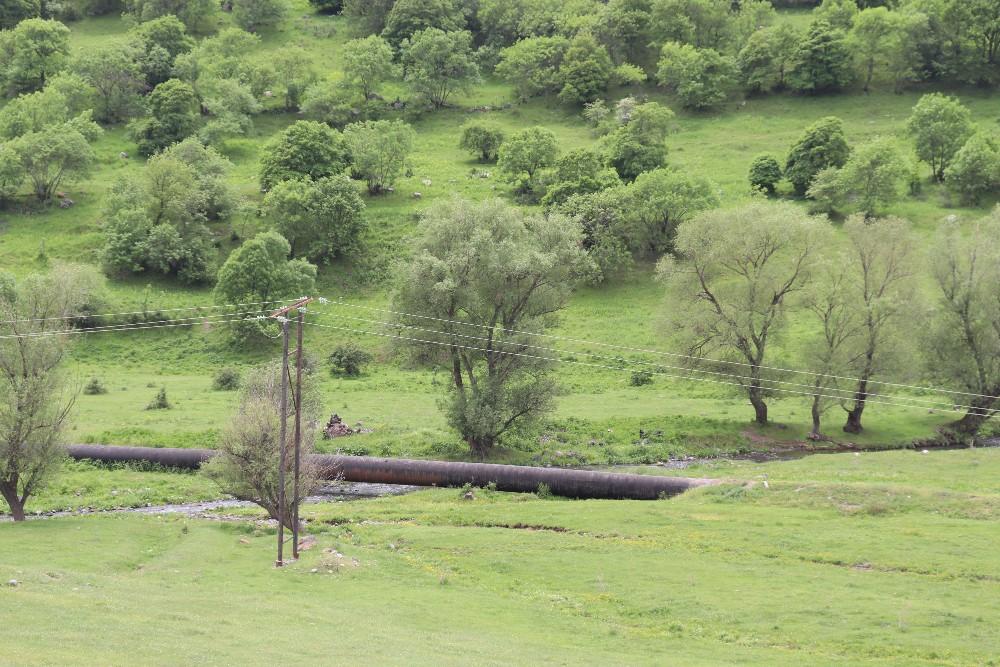 What environmental problems do hydropower plants create in Artsakh?

A commission was launched in Artsakh in February of this year to study the impact of small hydropower plants on the environment.

The Artsakh State Minister announced the establishment of the commission on January 27, the sixth day of the hunger strike of Alexander Kananyan, a resident of Karvatchar.

Kanayan demanded a halt to small hydro plant construction in Karvatchar (Shahumyan Administrative District), the removal of construction equipment from building sites, and a transparent investigation of the environmental and financial violations in the Artsakh hydro plant sector 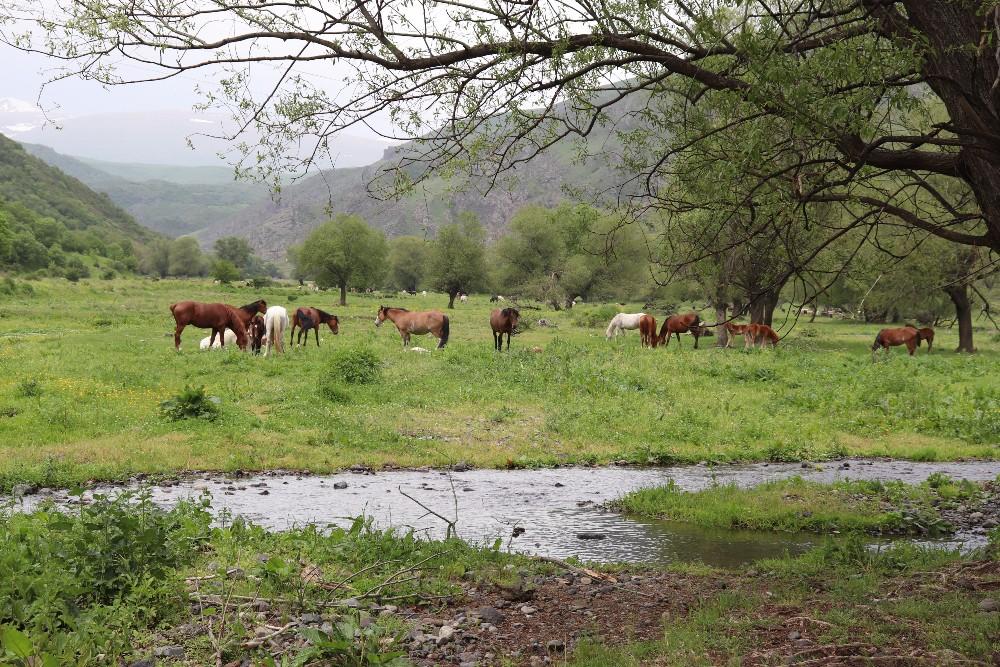 "The reality is that the ruling elite, which has already appropriated everything, realized for a moment that the rivers could be appropriated as well and that small hydro plants are just as profitable than mines,” says Armen Aghayan, a civic member of the commission.

According to Aghayan, the Artsakh government has no river water management and has not even considered drafting one.  He says therefore, officials have set no water use priorities related to the population, irrigation and other needs. The issue of expedient use of hydropower resources has not been discussed.

Aghayan argues the Artsakh parliament should make changes to the "Water Code" by regulating the field, adding that the government merely adopted legislation taken from Armenia, as per usual, and failed to make the necessary modifications. 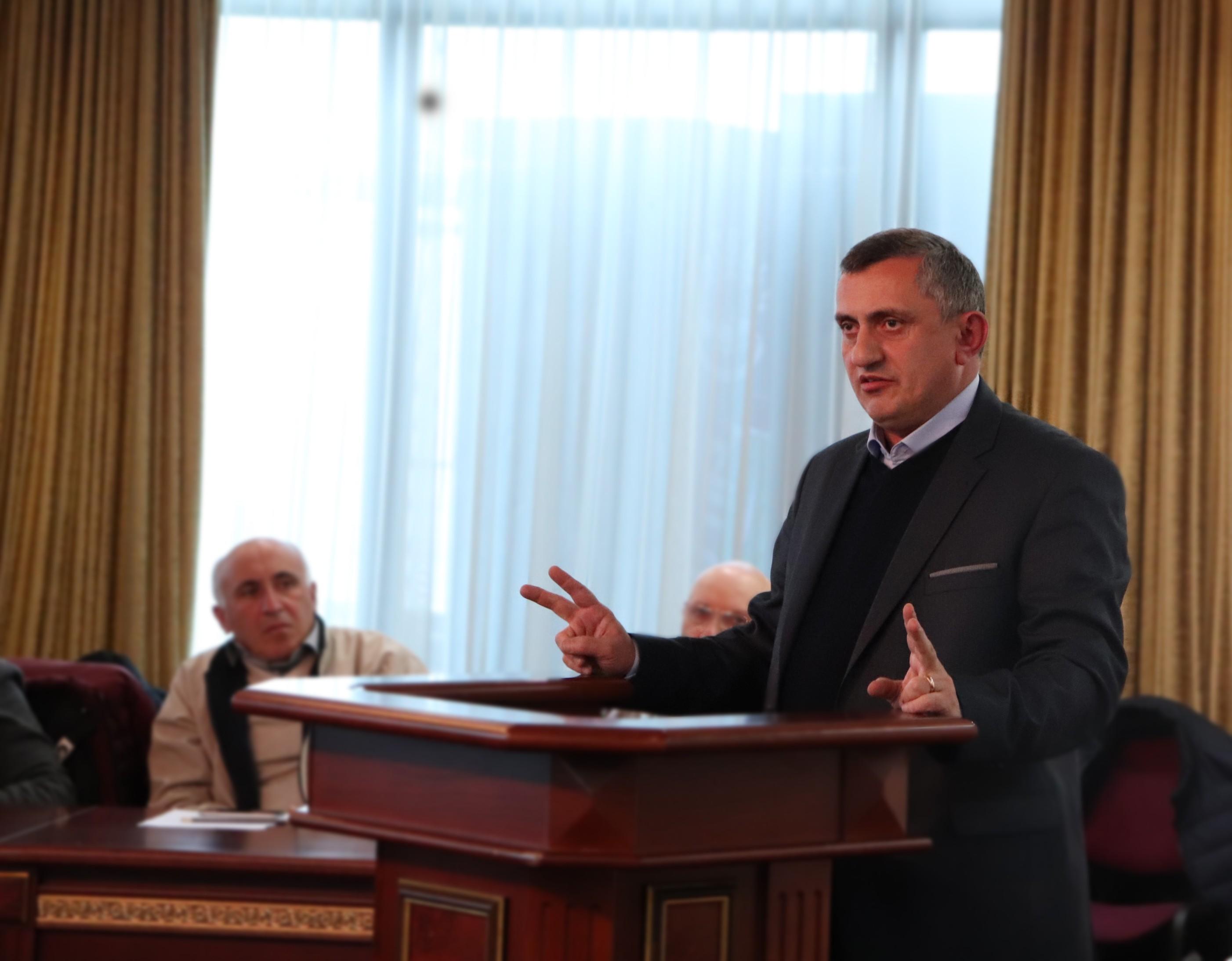 Aghayan says it was foolish to build a string of five hydro plants along some rivers and that one large dam would have been more environmentally effective. He believes that some of the smaller plants will be dismantled when new regulations are drafted and enforced.

"Energy resources of water reserves must be used to the utmost efficiency. But for this to happen, a complex program is needed. It must meet the requirements of construction of new settlements, agriculture and general development in the liberated areas. Second, the rivers should be exploited not to satisfy the greed of the pro-government circles, but with a sense of national usefulness and efficiency," he says.

In the photos: The northern part of Kashatagh and the hydropower plants built on the Aghavno River