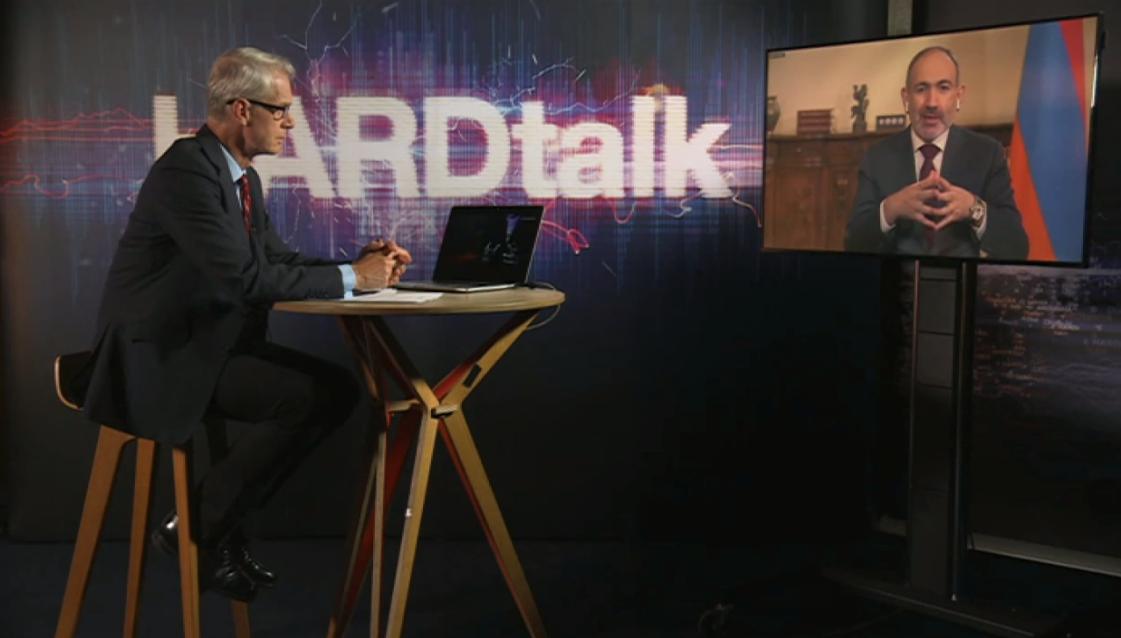 Pashinyan’s “HARDtalk” Stumble: Back to the Drawing Board

In less than a year, the BBC interview program “HARDtalk" has twice turned its focus on Armenia.

Ten months after its interview with Foreign Minister Zohrab Mnatsakanyan in October 2019, “HARDtalk” has just broadcast a second interview with Prime Minister Nikol Pashinyan. Conducted in English, the August 14 program raises some of the same issues; demonstrates a similar posture and attitude on the part of the interviewer, Stephen Sackur; and is sure to generate some of the same reactions in the Armenian community.

The “HARDtalk" format is really an interrogation, not an interview, certainly not a conversation, especially when the interviewee is a lesser known public figure whose English is passable but not sufficient for the formulation of complex, quick arguments. Hugo Chavez, for instance, answered the questions directed at him in Spanish. Sackur was more restrained in his interrogation of Sergei Lavrov.

Despite these variations “HARDtalk” ’s structure is hierarchical, and this is made clear from the get-go.

The hosts are “hard-hitting” and ask “tough questions,” which means their language is often one-dimensional, their pose politely domineering, and their persistence often arbitrary. These days, hard-hitting is a buzzword of sorts for a kind of journalism that is aggressive without being courageous, clever without being thoughtful.

“HARDtalk” often seeks yes-or-no answers; it likes admissions. It goes for provocation rather than depth, expecting strong, sometimes emotional reactions from the interviewees. Because of these qualities, it is often predictable, dull even, and certainly not very stimulating.

None of this, though, is meant to suggest that Pashinyan or his foreign minister was a victim of anti-Armenian bias, or that “HARDtalk” is in the pocket of the Azerbaijanis.  The program approaches all its guests with a Thatcher-like swagger, and it offers equal opportunity in the small mounds of rubble it leaves behind.  From Pashinyan to Lavrov to Gwyneth Paltrow, “HARDtalk” is just that—hard and talk, rather, hardly talk and more interruption! If by some miracle, “HARDtalk” managed to get Ilham Aliyev on the show, the end result would be the same--Azerbaijanis would claim that Sackur is pro-Armenian.

We Armenians will scream till we turn blue in the face that “HARDtalk” is pro-Azerbaijani, but in doing so we are perpetuating self-deception and encouraging media illiteracy.  More: we are saying, again, that we want to be comforted by the allure of international exposure via shows like “HARDtalk"” without doing the dogged work of reading such shows in terms of power and form and language.  We want the attention, and we want it on our terms, and in ways that we find acceptable.  It’s us against the world, one more time!

The prime minister had a choice, as did Mnatsakanyan before him: They could have declined. Neither did; neither shone, either.  At best, they were lackluster. Pashinyan had moments of clarity and quick retort, but for the most part he was reactive, repetitious, and a bit long-winded.  This is puzzling because the questions Sackur asked in the two interviews, in terms of content, tone and approach, were not substantially different though the world has changed in significant ways regionally and locally in the interim. Pashinyan was at an advantage, too, in having the Mnatsakanyan prototype to rely on so he could avert missteps, but he did not. Moreover, Pashinyan could have chosen to speak in Armenian and say what he wanted to say with more depth, rather than use the occasion to “show off” his knowledge of English, and that, at best at a basic conversational level rather than with a diplomatic lexicon.

Many reasons account for this lack of attention on the part of the Prime Minister, but one stands out: After Mnatsakanyan’s interview, there was hardly any serious, sustained and critical discussion in Armenia or the diaspora of his performance on “HARDtalk.” The reaction was either to praise to heaven or to trash into the earth.  Mnatsakanyan’s mastery of English is not a benchmark for a successful interview, nor is Pashinyan’s ability to interrupt Sackur while the latter was interrupting him. Public officials don’t learn much from such polarized approaches.  The absence of a critical context in our public life stretches far beyond media performances, and is endemic to the cultural, educational, and religious realms. We simply are incapable, it seems, of creating—through discussion, debate, conversation— pockets of critical, participatory public opinion, without which democratic aspirations in Armenia and the diaspora face huge hurdles.

Pashinyan, like his foreign minister, chose to accept the invitation. His task was to answer the interrogator clearly, concisely, and in the language and the politics of the day.  He had to do two other things:  He had to find ways of re-framing the interview in such a way as to avoid sounding defensive, which is the intent of the show: to provoke and see how the interviewees defends themselves.  Second, he had to avoid the historical slide, which gets him mileage at home and in diaspora communities, but which is a stumbling path in an international setting. In short, he had to speak less and say more, and say it from someplace at the edge of the “HARDtalk” sphere or outside its narrow, often stifling parameters.

In diplomacy, not every overture must be reciprocated, not every media offer must be seized.  Restraint or silence is as significant as the rush to be visible, to prove a point, to be in the kind of media spotlight—exhilarating but also transient—that journalism of the “HARDtalk” sort offers.  What is most important, though, is the choice a diplomat makes: to refuse or accept the lure, and on the basis of that decision, plan, prepare, and act.  And to do all this, knowing full well that in the end, with some notable exceptions, the international media’s primary function these days is to perpetuate themselves rather than point to new, informed paths of action, reflection, and possible change.

(Taline Voskeritchian teaches at Boston University’s College of Communication.  Her work has appeared in The Los Angeles Review of Books, The Nation, London Review of Books, Journal of Palestine Studies and other on-line and print publications.)

Vache Asatryan 2020-09-14 09:22:12
Ohhhh you approved the comments above ? Santo semitism? Conspiracy be, and Armenia needs a father ? Fml
Vache Asatryan 2020-09-14 09:20:51
Hetq, maybe a function to report comments on your platform as offensive might be helpful ?
Mel Haroutounyan 2020-08-25 12:04:20
If I was interviewed by Stephen Sackur I would remind him of the Falkland's war in 1982, when the might of Britain's Navy and Air Force went 10,000 miles away to fight Argentina in Falklands so that as Margaret Thatcher said it many times "the 2,000 islanders would continue their British way of life". Naghorno Kharabagh is right next door to Armenia, is populated with 150, 000 armenians and were at least 75% of the total population back in 1988 even after 70 years of Azeri rule.
Noric Dilanchian 2020-08-18 17:00:23
My reading and experience of reactions locally in Australia among Armenians to the BBC HardTalk "interview" mirrors how you've put it, that the Armenian reactions predominantly are "perpetuating self-deception and encouraging media illiteracy". On watching the interview earlier this week I shared the BBC HardTalk post and introduced it with the comment quoted below in the Facebook "Armenians of Australia" group (4,500 followers). QUOTE: "Not hard talk, silly talk. Stephen Sackur of the BBC's HardTalk program asks questions and makes statements involving commencing with a fixed position and throwing stones, increasing their size, and aiming to pummel the interviewee into submission. The attempt at advocacy fails. Nor is it exploratory, investigative or watch dog journalism, it's #attackdogjournalism. Journalism in the format of attack dog questioning, is liberated from grappling with complexity, conflicts of international law, or history. Sackur comes to the interview with no desire to discover and only a desire to accept submission. I'd post all the above on the BBC and on YouTube, but the BBC has no comment functionality and on YouTube the BBC has comments turned off for the video." END QUOTE. Turning finally to Pashinyan's performance I have two impressionistic thoughts. First, there's Pashinyan's decision to speak in English (it may be a requirement of HardTalk, I don't know). My thought is this, in Anglophone societies, which are increasingly inward-looking and monolingual, NOT to speak English can be perceived negatively. It can even make you appear suspect. Certainly Sackur's style would have differed had he been on the back foot communicating via a translator. Second, I'll turn to the purpose of these types of long form interviews, long form in contemporary Anglophone TV land. They have become media appearances for stating or telegraphing positions. It is part of what I term placard communication that dominates traditional and social media. Ground to its essence, it tells you WHAT TO THINK. Sackur's style is in synch with this race to the bottom style. A program like HardTalk is rarely going to be an opportunity to have reasoned communication or exercise one's powers of persuasion. Yes, Pashinyan could have been briefed or done better. My personal opinion is in the context he did OK, neither success nor failure.
David 2020-08-18 14:19:33
If by some miracle, “HARDtalk” managed to get Ilham Aliyev on the show, the end result would be the same--Azerbaijanis would claim that Sackur is pro-Armenian," says the above article. I would not count on that. I believe that Stephen Sackur is a Jewish name. Israel and Azerbaijan are allies, of course. The article already admitted that Sackur was "more restrained" in his treatment of Lavrov, the Russian Foreign Minister. Sackur's comment to Pashinyan that Armenia is "fighting old battles" was a nasty reference, I believe, to the existence of the Armenian Genocide issue. Armenia remains under genocidal threat today. The Armenian Genocide is not, therefore, an "old battle." Regardless of whether Mr. Sackur is Jewish, would he have dared to suggest to a Jewish interviewee that the Holocaust was an "old battle" and thus irrelevant? One doubts that. Has Mr. Sackur ever told his audience that several of the leading Jewish American organizations (and Israel) engaged in denial and dimishment of the Armenian Genocide and helped to defeat Armenian Genocide resolutions in the U.S. Congress? I doubt it. Mr. Sackur is no more objective than any other "journalist." He's just more obnoxious.
Tlkatintsi 2020-08-18 14:14:19
I totally agree with the opinions expressed in the article. The author raises many valid points that need further discussion.
ani 2020-08-18 13:27:58
to be a good prime minister, it's not necessary to speak english . It makes help, ok, for international exchanges/contacts. For the MFA , yes, I would request it . The prime minister must be more a FATHER-FIGURE for the folk ,especially in Armenia , rather than a high studied diplomate . This in regard of the history of the Armenian folk :genocide, 70 years of communist dictature,and tutelage , constant attacks by muslims around trying to steal more and more land, political and economical oppression , isolation a.s.o.. . Mr Nicol Pashinian does very GOOD work for his people ! But he cannot repare, what has been distroyed over decades in a few years. GOD with him ! a "simple-folk w' of europe