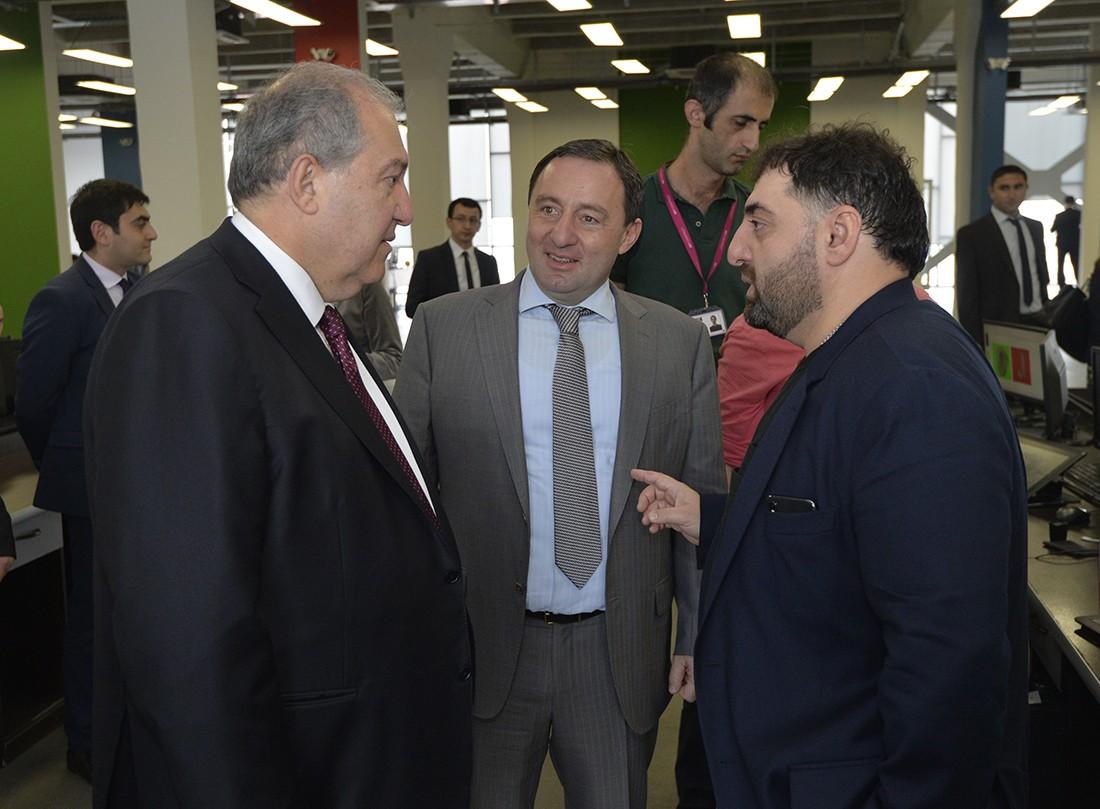 The Financial Intelligence Analysis Division of Malta (FIAU) has imposed the largest fine ever on a gaming company, this according to the Times of Malta.

The company was founded by Vigen and Vahe Badalyan, two brothers from Armenia that have registered several businesses in Malta.

According to the newspaper, the company failed to link player profiles across brands operating under the same license. In addition, the company’s monitoring systems were not adequate.

The inspection also revealed ineffective monitoring of activity and the lack of correct source of wealth and source of funds measures.

An on-site inspection found that the company was only flagging players as “high risk” when they reached a €2,000 spend on their gaming products. The FIAU and Gaming Board inspectors reviewed thirty player profiles, all reaching the €2,000 threshold but none of them had been rated as “high risk”. The FIAU noted that this showed that company wasn’t even following its own regulations, even if they were lacking.

The FIAU stated that Vivaro's Board of Directors had approved its Code of Conduct for Risk Assessment but did not specify when it was approved or revised, and that the FIAU had assessed it as inadequate. In addition to the administrative fine, the FIAU ordered the company to eliminate the shortcomings.

What are the Badalyans doing in Malta?

As part of the Paradise Papers project implemented with the International Consortium of Investigative Journalists (ICIJ), Hetq has documents of the Badalyan companies.  We’ve been studying these documents since 2018.

They reveal that the Badalyans own at least three companies registered in Malta. 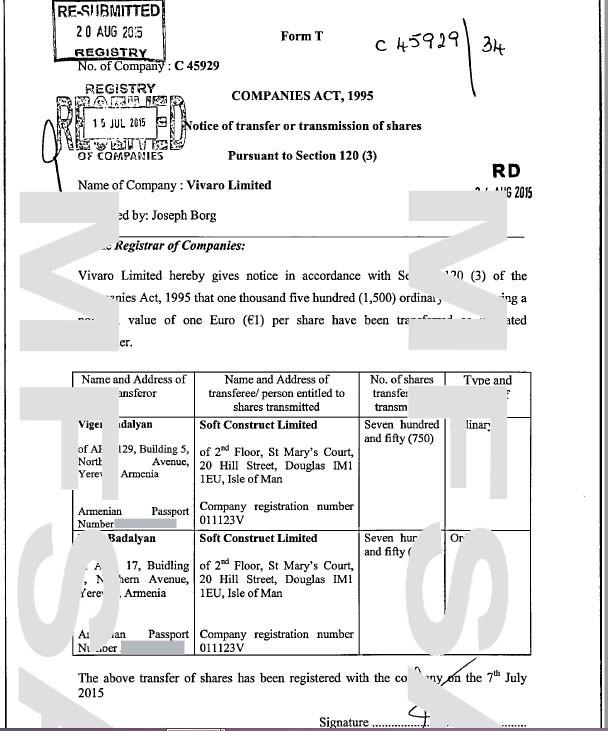 "The purpose is to obtain a license for a payment and settlement company under the FastShift brand and to provide payment and settlement services. With a Maltese license, these services will be available worldwide. The documents we submitted, and the software security are currently being studied. A license is expected in July 2018.  The company is considered a taxpayer in the Republic of Malta,” the Badalyan responded to a Hetq inquiry about the activities of FC Capital (Malta) Limited.

Kristine Hambardzumyan is listed as Vivaro Ltd. director according to the Malta corporate registry. 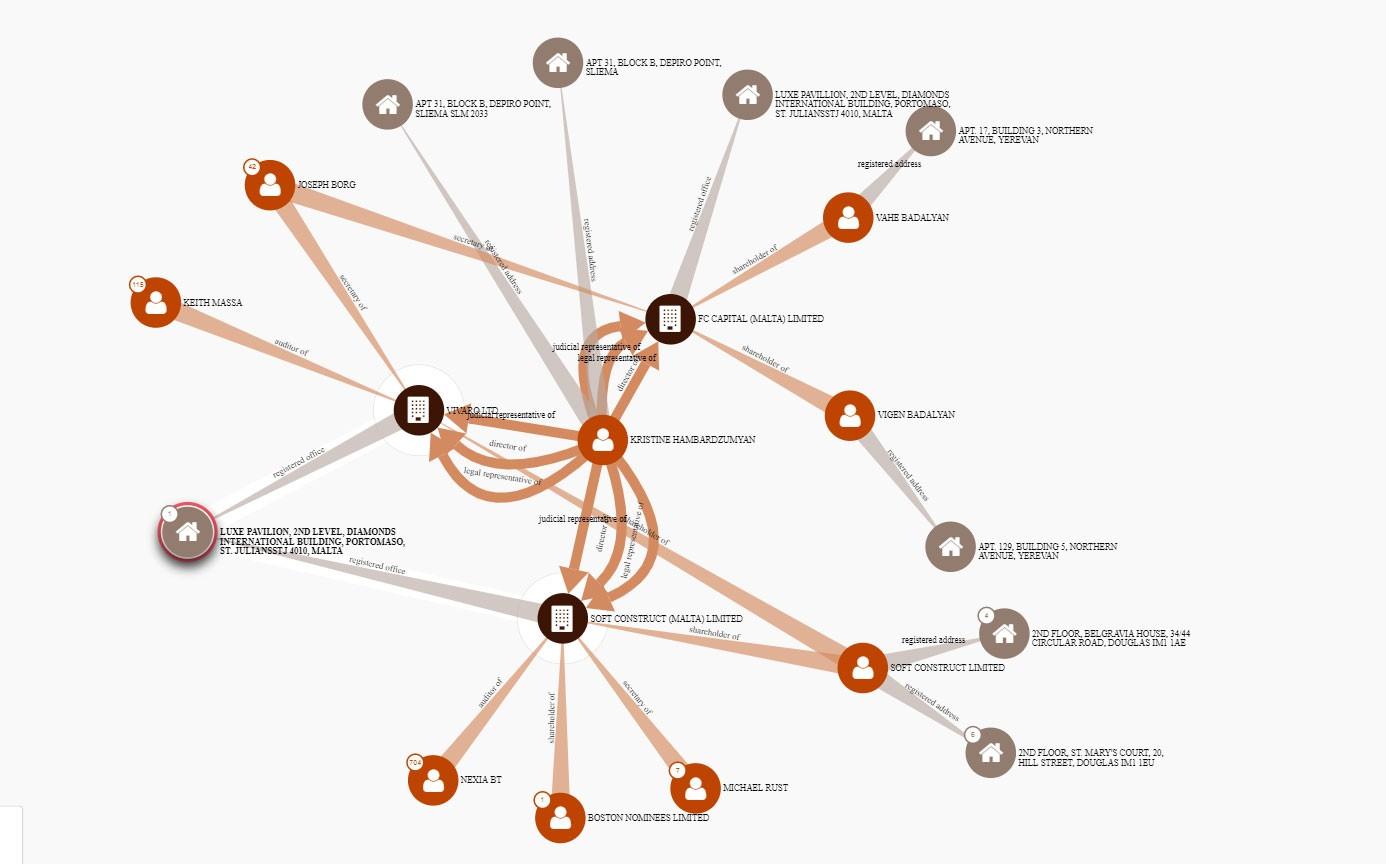 The Badalyan brothers now have a stake in only one Maltese company - FC Capital (Malta) Limited. The other companies are owned by Soft Construct Ltd. And Boston Nominees Limited registered in the Isle of Man.

The Badalyans' businesses in and outside Armenia

In 2012, the Badalyans registered Soft Construct on an offshore island in the UK. The company includes BetConstruct, Ucraft.me, FinConstruct and the StartIUp brands and businesses.

Soft Construct then established subsidiaries of the same name in different countries, thus securing its presence in more than ten countries, including the United States, Cyprus, Malta and Armenia.

The shareholder of Soft Construct LLC, registered in Armenia in 2014, was, until September 3 of this year, a company with the same name registered in the Isle of Man. As of this day, the Badalyan brothers became 50/50 shareholders.

The Armenian media focused its attention on Soft Construct LLC on December 7, 2017, when the government decided to alienate space and real estate from Nork Psychiatric Center and provide it to the Hin Nork Business Center CJSC.

The Hin Nork Business Center CJSC is part of the Badalyans business network. According to Armenia’s State Register, the brothers are equal shareholders.

Vivaro advertisements can be seen everywhere in Armenia - on the streets, on billboards, on TV, online media and social networks. It’s a veritable ad blitz.

During the economic crisis of 2008, the Badalyan brothers founded Vivaro Betting LLC. It’s one of the largest taxpayers linked to them registered in Armenia.

There are nine well-known operating bookmakers in Armenia that make the top 100 list of online bookmakers according to the TOP100 Bookmakers website. Vivaro Betting ranks second of the nine with a 26.8% market share. Toto Gaming leads the pack.

In May 2017, Vigen and Vahe Badalyan registered their shares in the name of their father Romik Badalyan, who is still the sole shareholder of Vivaro Betting LLC.

On the same day, the Badalyan brothers transferred their shares in Vivaro Group LLC (formerly Vivaro Game LLC) to their father as well. Vivaro Group organizes online betting games. On May 6, 2020, they re-registered the shares in their name on a 50/50 basis.

Harutyun Hambardzumyan is the director of most of the Badalyans' companies, such as Soft Construction. He is a member of the Board of Directors of Fast Credit.

According to the Fast Credit website, Hambardzumyan has served as General Director of Vivaro Betting LLC since 2008 and has been managing Vivaro Game since 2015.

During the 2017 Yerevan Municipal Council election, Hambardzumyan was nominated by the Republican Party of Armenia as a candidate. He didn't garner enough votes. 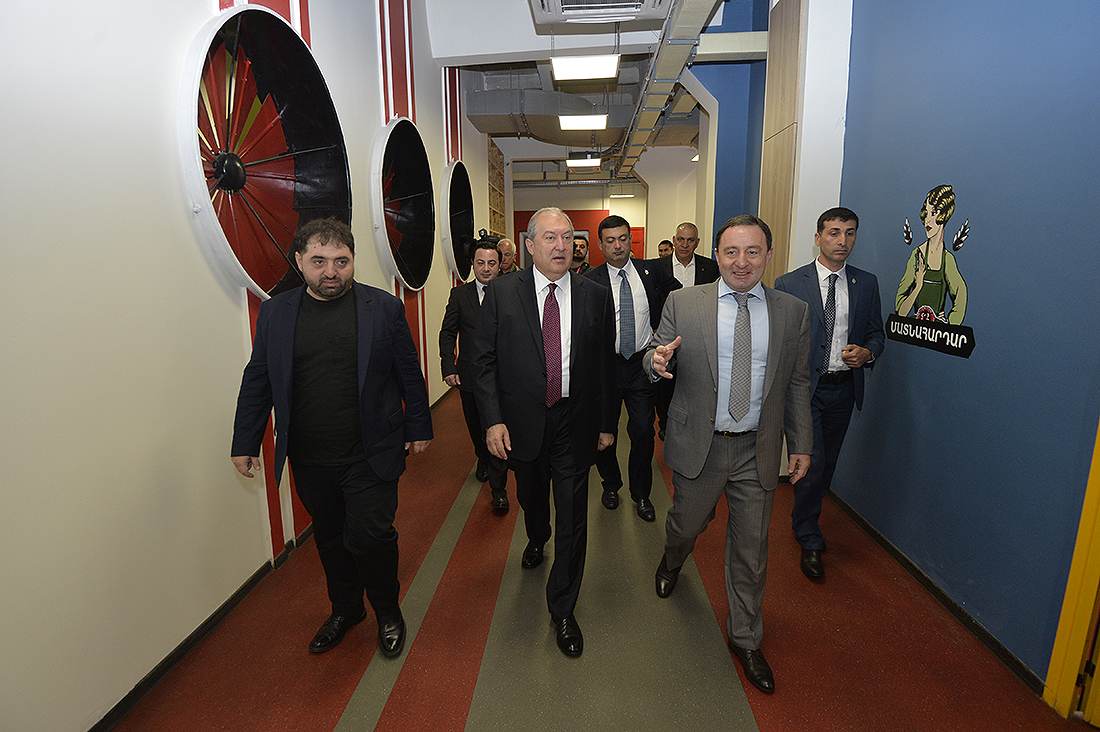 On May 31, 2018, Armenian President Armen Sarkissian visited the office of Soft Construction (see photo). According to Sarkissian’s website, Soft Contract currently has offices in fourteen countries with more than 500 partners.

The Caucasus Hotel and Restaurant Complex (see below) on Yerevan’s Ashtarak Highway is part of the Badalyans’ business network.

The Caucasus Tavern on Hanrapetutyan Street in downtown Yerevan also belongs to them.

The Badalyan brothers founded Getar Business Center LLC in 2014, with a charter capital of 549 million drams.  It constructs residential, public and industrial buildings. It’s registered on 4/17 Getar Street in Yerevan, in a building owned by them.

The Badalyans' Fast Credit Capital company, which has been operating since 2011, is registered at this address. Starting its activity as a pawnshop in 1994, it has become a major credit organization in the financial market, providing loans to individuals and legal entities.

“For our family of twelve, we have invested about €2 million in the Maltese economy to obtain citizenship," the brothers responded to a Hetq inquiry.

When we asked why the Badalyans decided to relocate to Malta and become citizens, they responded.

“Our family decided to become citizens of Malta so that we do not have visa problems when traveling abroad. Several our family members work for our company Soft Construct, which has offices in fifteen countries around the world, attend more than 90 international exhibitions a year, and our work requires frequent business trips throughout the year. Maltese citizenship allows us to enter 168 countries without a visa."

The benefits of Maltese citizenship

Malta approved a program in 2013, allowing foreigners to receive citizenship in return for large-scale investment. The program has been approved by the European Commission. According to the program, Maltese citizenship can be granted to a private investor in return for an investment of €650,000. 70% of the money is transferred to the National Development and Social Fund. The rest of the money is transferred to the budget.

In addition to investing, applicants must purchase real estate on the island worth at least €350,000 euros.

Maltese passport holders can enter most countries without a visa. The issue of tax residence is left to the applicant's discretion.  The names of the citizens who received citizenship are published on the government's website every year.