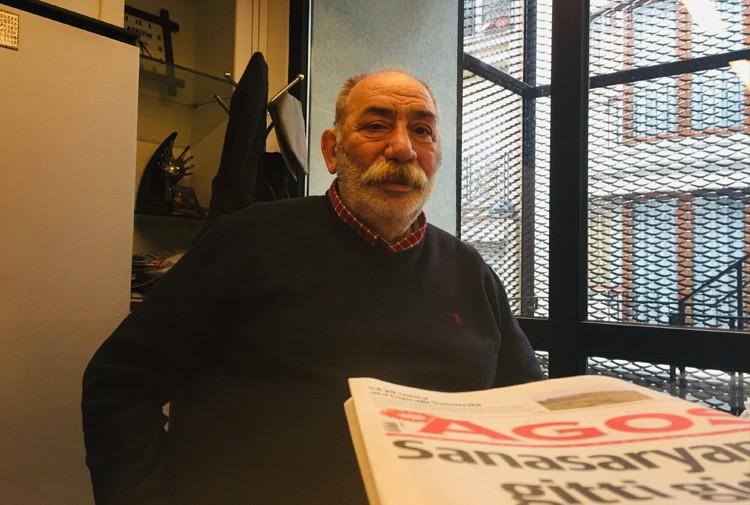 Hetq talks with Pakrat Estukyan, an Istanbul-based journalist and editor of the Armenian section of the Agos newspaper, regarding how the fighting along the Artsakh-Azerbaijan border is viewed in Turkey and its impact on the local Armenian community.

Mr. Estukyan, are there any public discussions in Turkey about the events taking place in Artsakh?

Turkish society hears about Artsakh through Turkish anti-Armenian propaganda. The misinformed people have no idea about the historical past of the problem.

What is the attitude of people in Turkey to Turkey's involvement in the Nagorno Karabakh conflict, its open military and diplomatic support to Azerbaijan? How are these steps of Turkey perceived, what assessment were given them by different political groups - left, right, liberal?

There are many supporters of Erdogan's belligerent policy. Opposition voices are not heard due to the pressure exerted by the government.

The situation of the leftists is quite controversial, as a significant part of them are driven by Kemalist nationalism. Many liberals have left the country and taken refuge in Europe. The university youth, who in the past were a very important factor against the authorities, are completely neutralized by the heavy police presence. The two forces that have taken a courageous stance against government pressure are the Peoples' Democratic Party (HDP) and the feminist movement. They are the only ones who dare to take to the streets in protest and confront the police. The influence of several opposition newspapers and TV stations is exceptionally low.

In relations with Azerbaijan, Erdoğan put forward a new slogan - "One Nation, Two States". What is the attitude to this in Turkey?

The slogan "One Nation, Two States" is based on the main common denominator of the two peoples - anti-Armenianism. Turkey is increasingly opposed to pro-Arab Sunni principles, which is in stark contrast to pro-Iranian Shiite Azerbaijan. The slogan remains in force as long as there is an Armenian problem. Peacemaking on this issue (albeit difficult) also bankrupts the empty phrase "one nation, two states."

What is internally motivating Erdogan to get involved in the Nagorno Karabakh conflict and to openly  support Azerbaijan? Many experts note that the economic situation in Turkey is deteriorating day by day, with the Turkish lira depreciating against the backdrop of the conflict, and that Erdogan is trying to divert attention from economic problems by interfering in the conflict.

Before the Karabakh war, Turkey’s adventurism resulted in its intervention in Syria and Libya. Ankara became an actor in the civil war, always creating instability, looting and destruction. There were two important factors in that process: supportthe "Ihwan to the Muslim" movement (Muslim Brotherhood), and divert the agenda from the economic crisis in the country.

It is no secret that the Turkish lira has depreciated against other countries' currencies. The devaluation of the national currency brings poverty. Recently, fact-finding data revealed how the country's Ministry of Health hides the number of people infected and dying with coronavirus.

Amid these shortcomings, Erdogan wants to assure his supporters that Turkey is shining on the world stage and is leaping from success to success. The number of those believing his propaganda, despite growing poorer at the same time, is significant.

There is a widespread opinion that Erdogan wants to directly challenge Putin to compare their two strengths. What do they think about this in Turkey?

Turkey, which bought Russian S-400 missiles, and caused an uproar, has not yet assembled the arms, avoiding a US and NATO backlash. Putin and Erdogan are two unfriendly rope players on the same rope, trying to show off their strength to the same audience. Failure will be costly for the recipient.

A few days ago, the opposition People's Democratic Party (HDP) called for peace. HDP MP Garo Paylan was subsequently targeted by various nationalist groups. Is Turkey, in traditional fashion, trying to silence critical voices, or are there other reasons that are not obvious at first sight?

The HDP is the only opposition movement in Turkey that bears the brunt of severe persecution by the government.

Thousands of party figures have been jailed. The municipalities they won in the regional elections have been seized. These days, the arrows of persecution are aimed at the Armenian MP Garo Paylan.

Pro-government NGOs are targeting him and demanding that he be punished. There are also campaigns in support of Paylan, which unfortunately remain in the useless like signature petitions and cannot guarantee his safety.

From the very first days of hostilities, Turkish-Azerbaijani nationalist groups organized car rallies in the Armenian populated districts of Istanbul. Are the Armenians living in Istanbul in danger? How real is the danger of ethnic violence targeting Armenians?

Turkish-Armenian society will feel insecure not only today, but forever in the country where it lives.

Not only Anti-Armenianism, but xenophobia is widespread in society, and all those who are destined to be a minority in a region ruled by a majority share that feel of insecurity uniformly.

Sareen 2020-10-09 21:52:30
A timely interview, and instructive too. Or should be, at least for the Pashinyan government whose rhetoric, as understandable as it is to keep national morale high in these difficult times, makes the Armenian communities of Turkey even more vulnerable to the kind of pressures the interviewee alludes to. The case of Garo Paylan is a jarring example. but most likely merely the most visible one. The Armenian government should be more judicious in its public pronouncements, always taking into account the effect such pronouncements have on the Armenians who live in the Middle East in general and Turkey in particular, and whose support the Armenian government continues to seek and encourage.