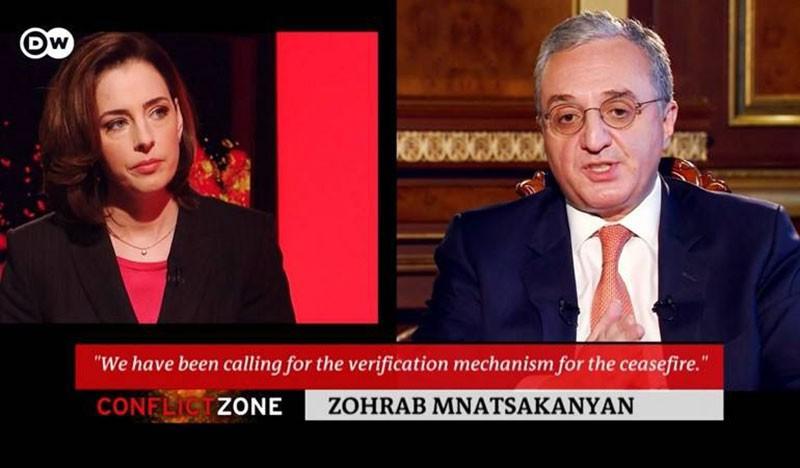 Armenian Foreign Minister to Deutsche Welle: "This is a battle for survival"

There is currently fighting in the disputed region of Nagorno-Karabakh, governed by ethnic Armenians, but which is recognized as part of Azerbaijan by the international community. Hundreds have already been reported dead. You have been part of talks to broker two ceasefires in that regard. And yet the fighting continues. What responsibility does Armenia and the forces in the region which you back bear for the continued fighting?

We have committed ourselves fully to the two statements: one in Moscow, the joint statement of the 10th of October, and the second one on the 17th of October, committed fully to respect the ceasefire, to go back to the negotiations, and to find a peaceful resolution to this conflict. We have been totally faithful. However, the Azerbaijani side has chosen the path of war. The two ceasefires have been violated right away after we have reached an agreement, and there has been no calm on the line of contact and throughout the territory where the conflict is taking place. So, we have issued a statement today, in which we have reiterated our full commitment to the agreements that we have reached and expressed in those two statements.

You have casualties, the other side says that they have casualties. The Azerbaijani say that 60 people have been killed, 270 wounded since the fighting. So, I just like to ask you, because I am hearing from you: both sides are accusing each other, they say that you started it, you say that they started it. Either someone or one of you is lying here. It doesn’t bode well, does it, for two countries, who need to sit together and find a peaceful solution to the conflict.

Excellent point you are making about the blame game. This is exactly this devious path that has been chosen to engage in the blame game and to continue with the attacks on the civilians, on the Nagorno-Karabakh consistently. We have been calling for the verification mechanisms for the ceasefire. If the Armenian sides - in Nagorno-Karabakh, in Armenia - are blamed in any way, then let’s go ahead, let’s do the verification mechanism and be done with it. However, Azerbaijan has been consistently avoiding that, consistently rejecting those proposals, because this is a very convenient way of deception and engaging us into this blame game, ensuring the international community that there is no way forward.

Right. Well, those accusations as we have been mentioning have been coming from both sides, Mr. Foreign Minister. So then, I would like to ask you the message, ultimately, that has been coming from your side. The message from the Armenian Prime Minister, he said the following in the days after the first ceasefire was agreed, and this is a quote: “At this decisive moment, we will not cave in, because this is a faithful war for our people,” he added to that, “we will fight till the end, and that end is called free and happy Nagorno-Karabakh.” I’ll put it to you, because, I mean, this was in the days after the first ceasefire was agreed and he is talking about fighting till the very end. Is this really a rhetoric that is supposed to support, build support for a ceasefire, build support for peace?

Again, I am emphasizing this with full responsibility, the Armenian sides emphasize the importance of the ceasefire and the verification mechanism. I strongly reiterate the commitment of Armenia to respect the ceasefire, to respect the commitments we have undertaken on the 10th of October and the 17th of October. Nagorno-Karabakh has also reiterated its support to that. But sitting back and waiting when you are killed, your family is killed, your property is destroyed... You must understand this is a fight for survival, existence. This is what this conflict is all about. I want to come back to the especially important question that you also raised and that is the question of the peaceful resolution.