ArmBionics started as a student project and became a startup company in 2019. Its goal is to create and produce prosthetics in Armenia for the disabled and amputees. Many young men lost their limbs in the 2020 war in Karabakh, and the need for these implants grew. Some Armenians from the diaspora are volunteering to accelerate the process and start producing prosthetics in the next months.

“I create models, draw them, design them, then we print them with a 3D printer. It becomes reality,” says Manvel Grigoryan. The 24-year-old mechanical engineer came to Armenia from France as a volunteer through the Armenian Volunteer Corps.

He sketches the models for different products. For example, he designed a partial hand for people who lost one or multiple fingers. Another model is a mechanical hand that can open and close. The myoelectric hand is a product that allows several movements thanks to sensors on its surface. 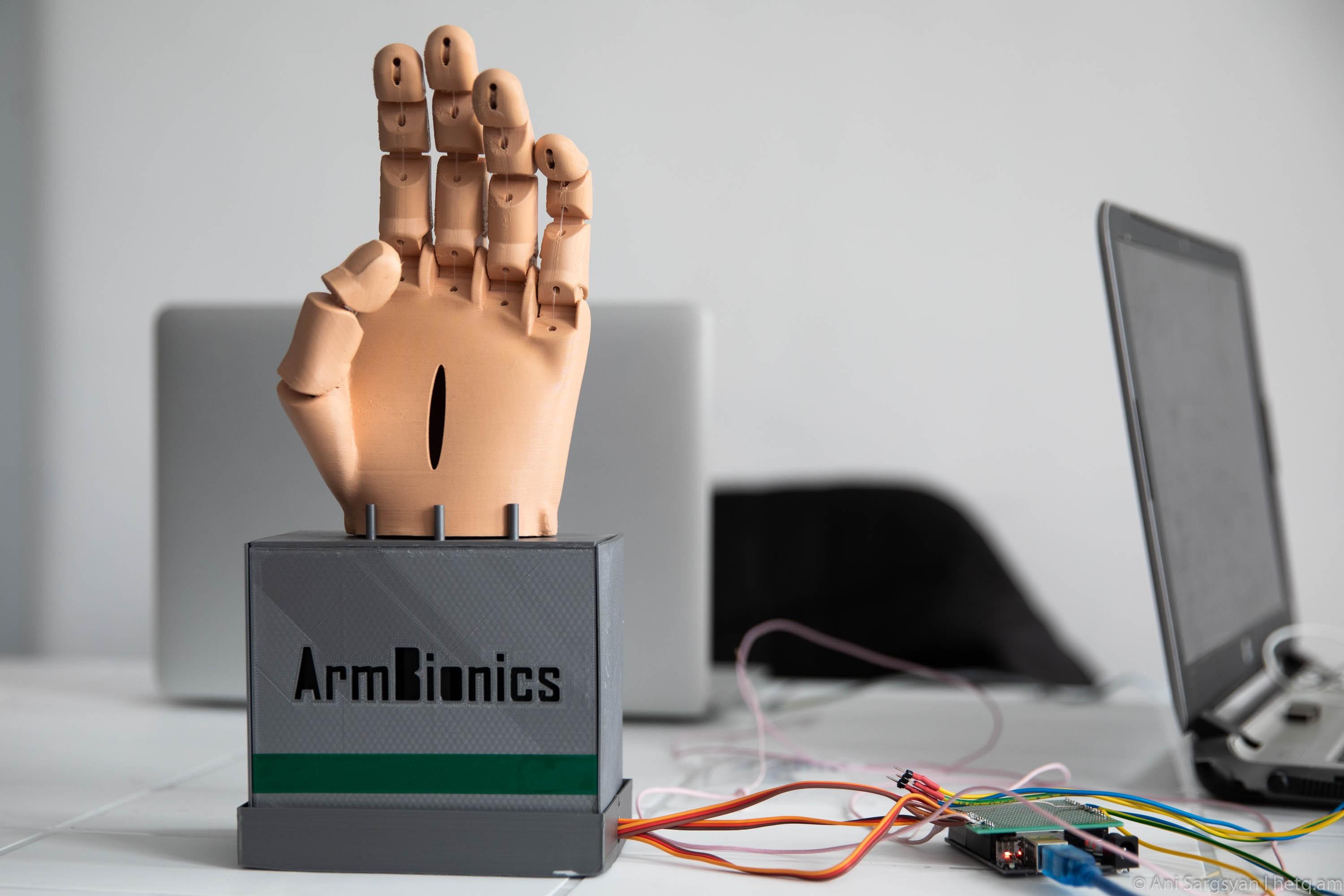 Gabriela Mullukian, a 29-year-old electrical engineer from Uruguay also volunteers at the start-up.  “My role is to study the signals to be able to be processed and then to translate those signals to electrical movements,” she says.

“Our brain sends signals to our muscles. These kinds of signals have to be filtered and amplificated and we have to translate for the movements of the muscles so that then they move the fingers of the hand,” says Gabriela.

The 21-year-old is a data scientist from the US. He took a year off from college to come to Armenia through the Birthright program. 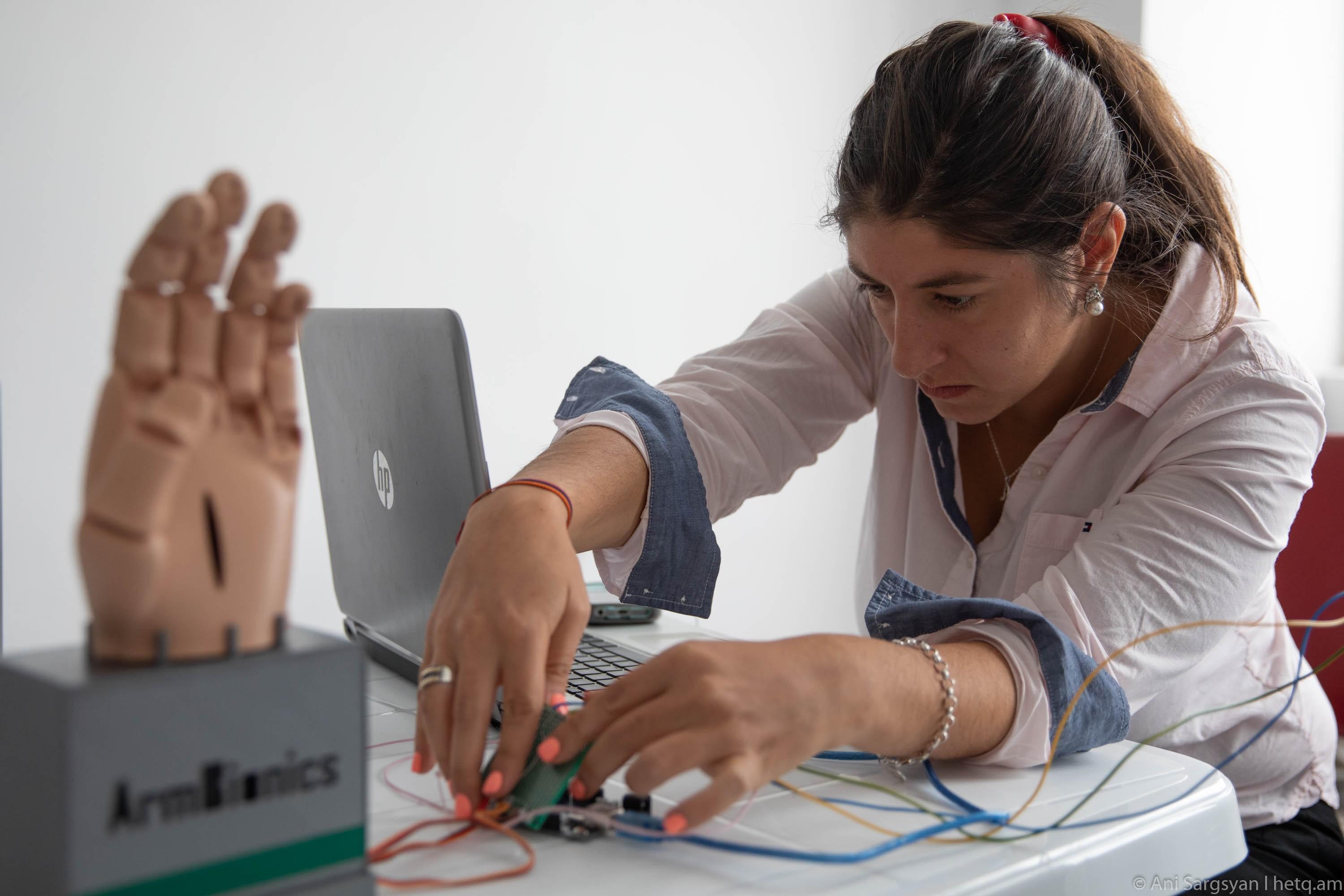 “I am trying to use that data and interpret it to build an algorithm that allows you to classify these individual movements. With enough development, eventually, the person will be able to just think ‘do this action’ and then the algorithm will interpret it as such,” he adds.

There are now ten in the team, including the volunteers. But the company wants to keep growing.

“It’s really nice to work with all these people from different countries. I am very proud of this international team, and of the fact that people of Armenian descent decided to get involved. It’s so useful to have different professions and to mutualize this knowledge from abroad,” says Marina Devtyan, CEO and co-founder of ArmBionics. The 22-year-old studies medicine in Yerevan, specializing in neurosciences. 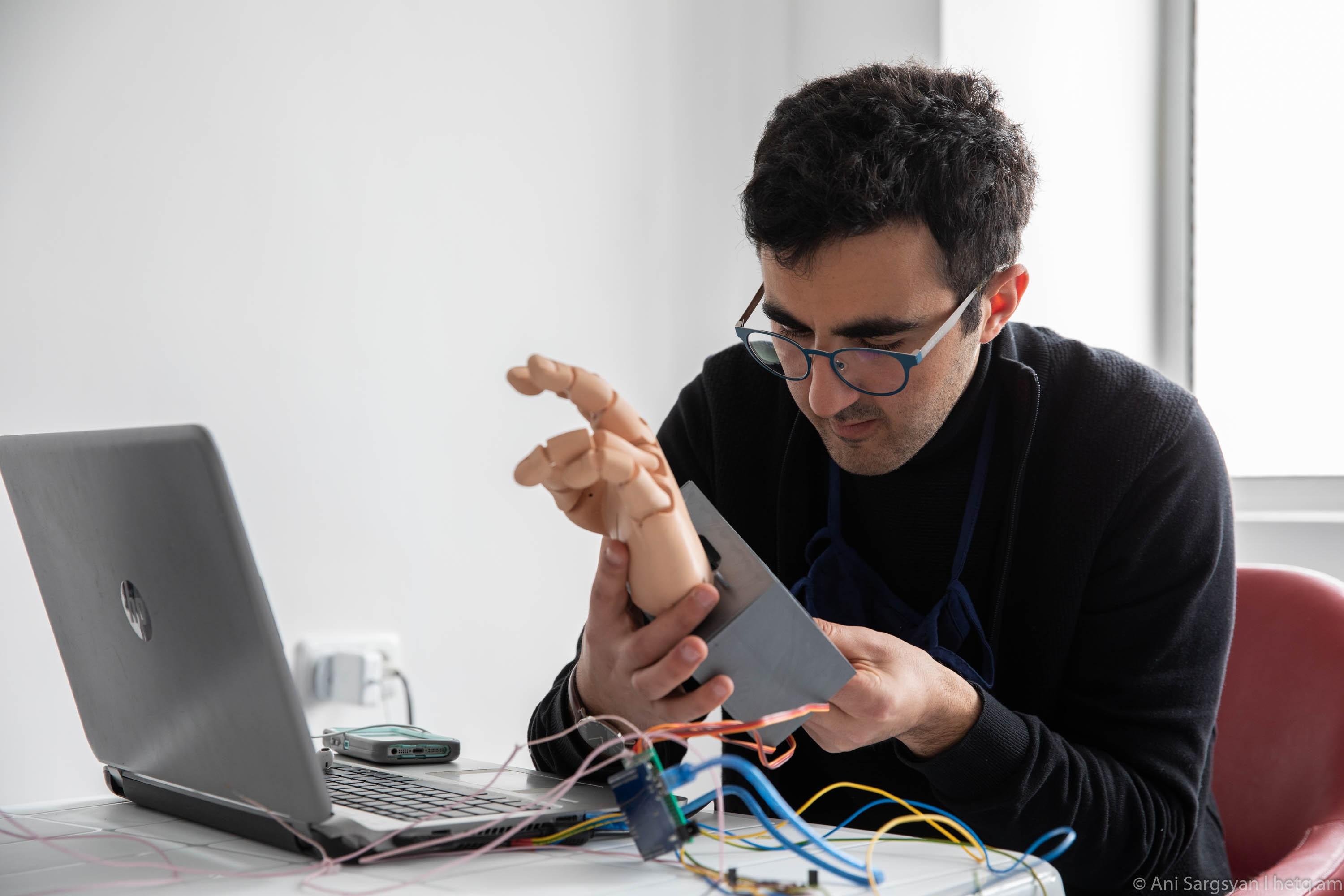 ArmBionics won an ISTC Joint Research Grant in 2017. The ISTC a joint initiative of the Armenian government, Yerevan State University and USAID which aims at helping the local tech community grow. It allowed Marina and her team to exhibit their products at Digitech 2018, and the World Congress on Information Technology (WCIT) 2019. They also had the opportunity to visit rehabilitation labs in Northwestern university and at the Shirley Ryan Ability Lab research hospital.

“You don’t see a lot of disabled people in the streets, partly because they are afraid being seen by others and don’t go out. That needs to change, and we hope that we will help them with that too. Give them confidence,” says Manvel.

Marina agrees. “There is a lack of education, and a stigma on disabled people in our society. That does not allow disabled and amputated people to feel free to live their life and to dare. And many of them refuse to use a prothesis thinking it cannot really help, and there is also a psychological aspect to it.” 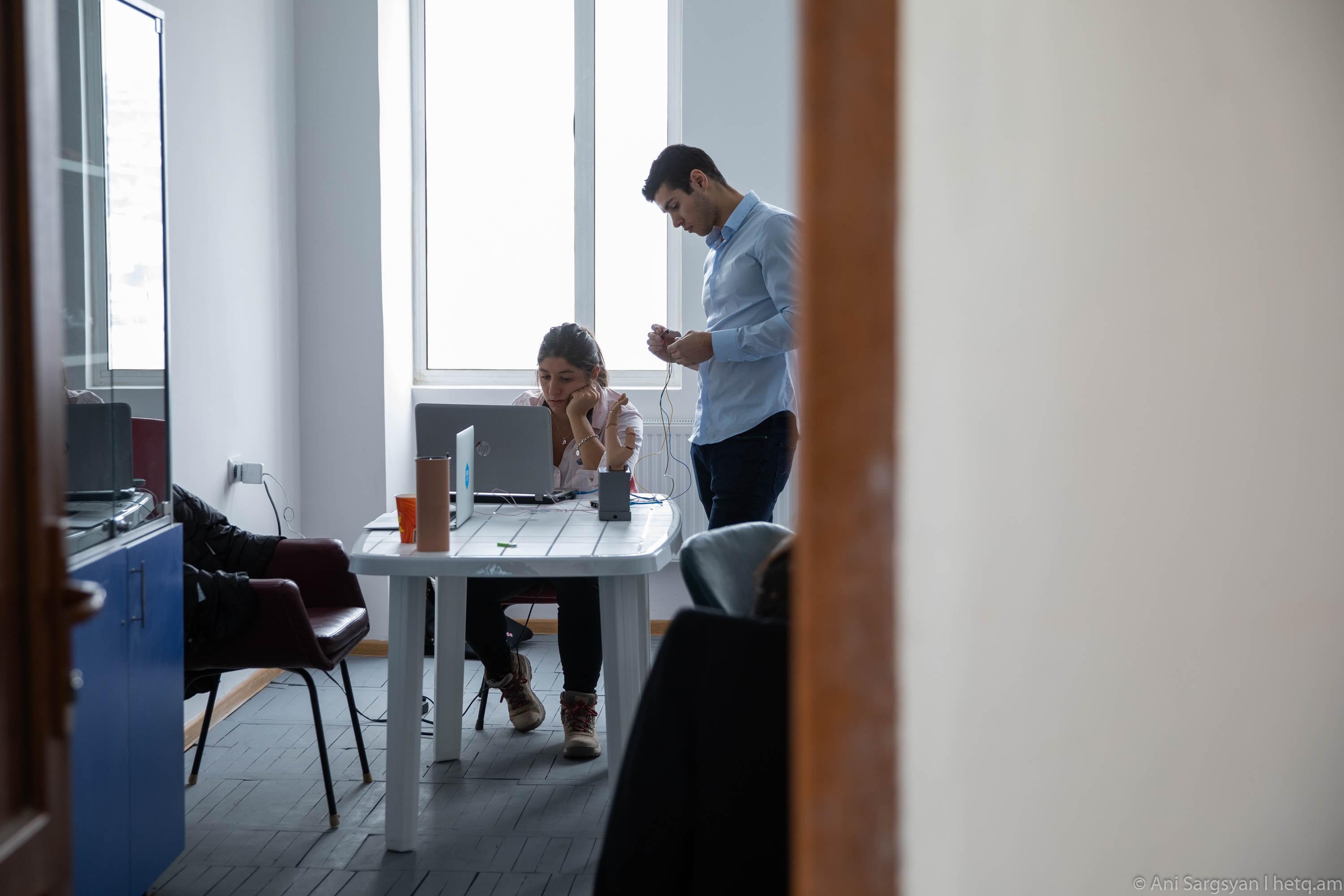 To put an end to that stigma, the team wants to organize seminars and trainings. “It’s not just about business. There is a human and cultural side to our project. We need to help people who will live with the prothesis, and also generally try to make disabled people more accepted,” says Manvel.

“When the war started, it gave a new momentum to the project for sure. More people joined. As if we realized how important it was to produce the prothesis in Armenia. We thought that this country is an area where wars and natural disasters can occur, and we just cannot afford to buy very expensive prothesis from abroad when in need. If we can keep the money here, we should do it,” says Manvel.

For now, all the parts for the protheses are from Armenia, except for a few of them that cannot be found locally and were imported, like the sensors. The company’s goal is to produce everything in the country. That would create job opportunities and make the products cheaper than the current prizes on the international market. The start-up told Hetq they cannot disclose the price yet.

The 2020 war between Armenian and Azerbaijan over Nagorno-Karabakh also motivated some Armenians of the diaspora to come and help.

“When the war ended, I just thought, I have to go to Armenia to do something useful. I applied to the Birthright program,” says Gabriela. “The most exciting part of this project is to help people, to help this nation, by using my professional skills.”

“We cannot stop working, I just wake up in the morning and I want to come to work. When you are working for a good cause it motivates you so much,” says Francesco. 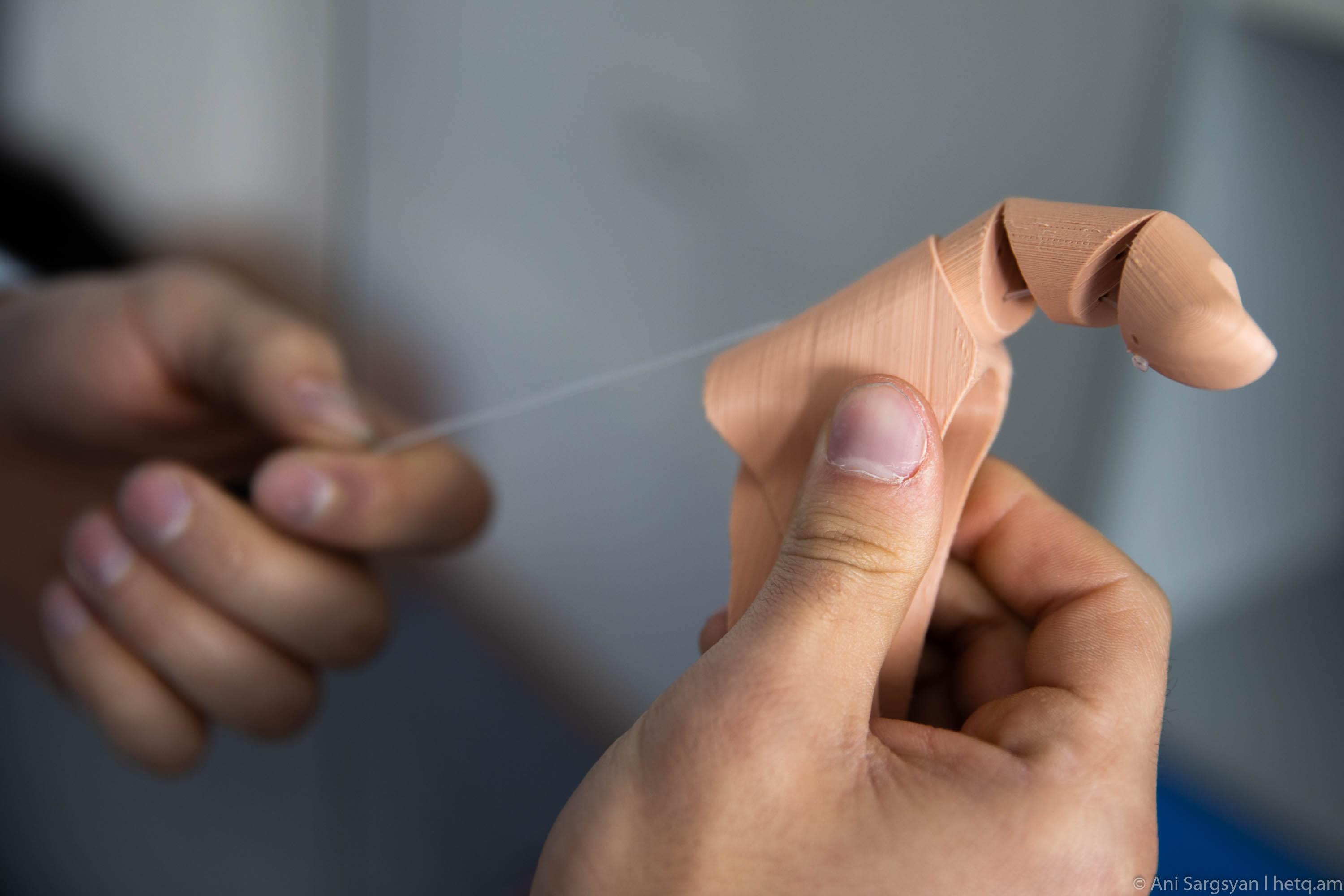 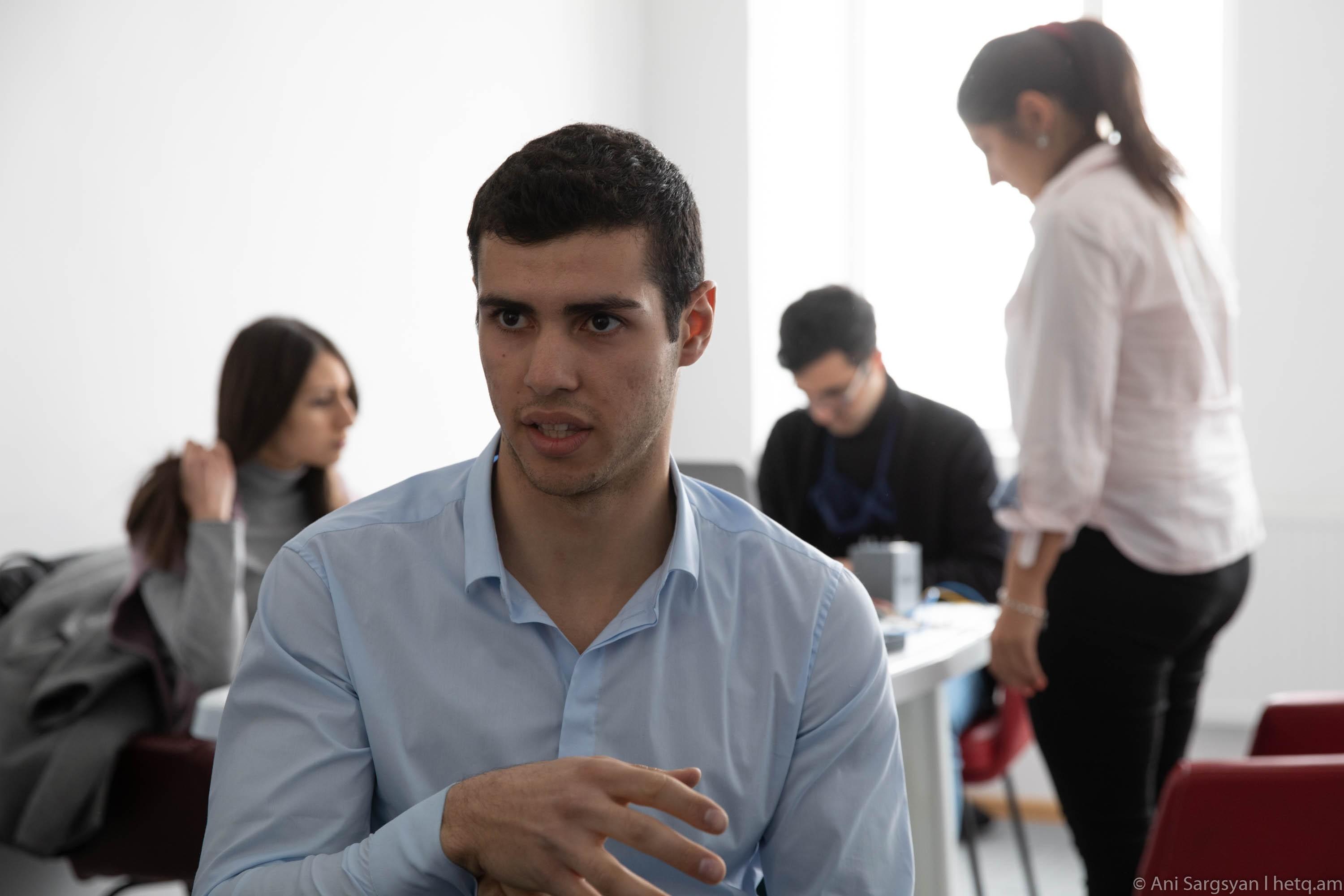 After the conflict, the young company decided to concentrate its efforts on the mechanical hand product first, because it is easier to produce quickly, inexpensively and in quantity. There are no official figures concerning the soldiers who had to be amputated as a result of injuries.

ArmBionics has contacted the Armenian government to get data on which devices are most urgently needed but has not heard back yet. The start-up would like to market the device both privately and through the government. “Our goal is to start the production and sell our first mechanical hands in the next three to six months,” says Francesco.

The Armenian government made a partnership with the Hayastan All-Armenian Fund in December 2020 to provide war amputees with prosthetic devices. In rehabilitation centers across Armenia, soldiers who get access to prosthetics get imported products, mostly from Germany. However, there is no clear timeline or data on the number of disabled soldiers getting the devices.

Although ArmBionics has successfully designed and tested several hand prototypes, the start-up is still looking for money to get into the production phase. They need about US$300,000 at this stage.

Marina Devtyan hopes that this is just the beginning: “We are also preparing designs to develop leg models and maybe later on, we could also work on smart robotic hands for the kitchen, or for machines sent in space.” 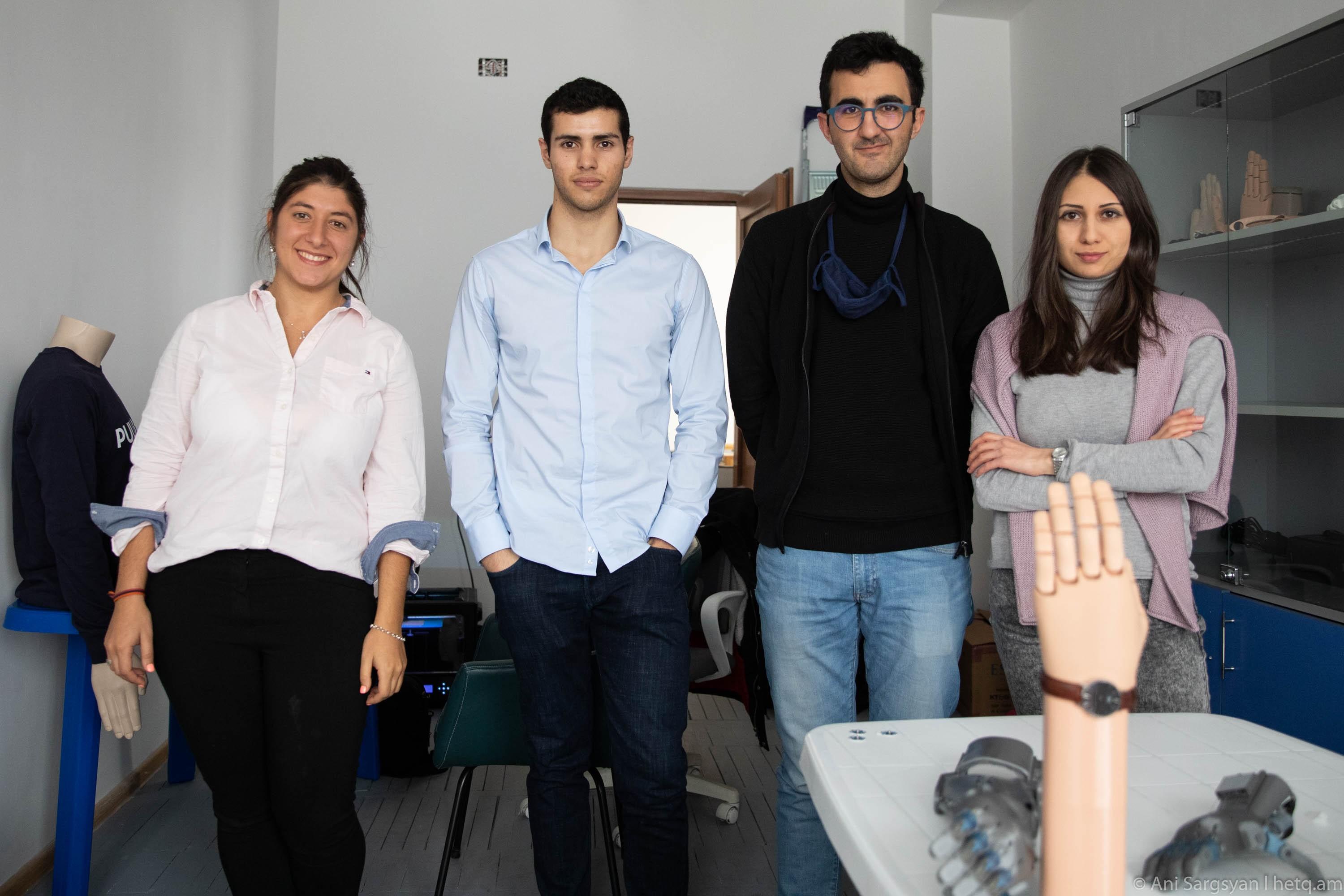