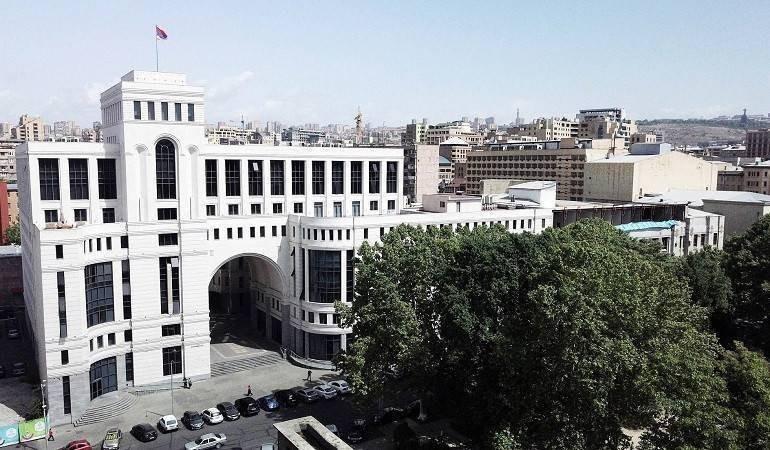 Responding to recent videos showing the dismantling of the domes of the Armenian Ghazanchetsots Cathedral of the Holy Savior in Shushi, now under Azerbaijani control, Armenia’s Ministry of Foreign Affairs released the following statement.

The actions being carried out by Azerbaijan at the Ghazanchetsots Cathedral of the Holy Savior in Shushi are deplorable, as there are already many precedents for the destruction of Armenian places of worship, monuments, as well as for justification of such actions.

Among the many war crimes committed by the Azerbaijani armed forces during the aggression against Artsakh is the deliberate targeting of the Shushi Ghazanchetsots Cathedral with high precision weapons twice within a day, followed by the act of vandalism after the ceasefire was established.

It’s noteworthy that Azerbaijan carries out actions at the Shushi Cathedral without consulting with the Armenian Apostolic Church, which clearly violates the right of the Armenian believers to freedom of religion. It is equally concerning that Azerbaijan has started to change the architectural appearance of the church before the launch of work by the UNESCO expert assessment mission. It is obvious that Azerbaijan is deliberately blocking the entry of UNESCO experts to the endangered Armenian cultural heritage sites, on the one hand to cover the war crimes it has committed, and on the other hand to change the historical-architectural integrity of the monument.

In this situation, all the concerns of the Armenian side that these actions of Azerbaijan are manifestations of vandalism, aimed at depriving the Shushi Mother Cathedral of its Armenian identity are more than substantiated.

No action can be carried out at the Ghazanchetsots Cathedral, the numerous Armenian historical and cultural monuments and places of worship in the territories of Artsakh under the Azerbaijani occupation, without documentation of the current situation by international, first of all, UNESCO experts and their active involvement in restoration works. Shushi Cathedral is one of the important centers of the Armenian Apostolic Church in Artsakh, it should serve as a place of worship.