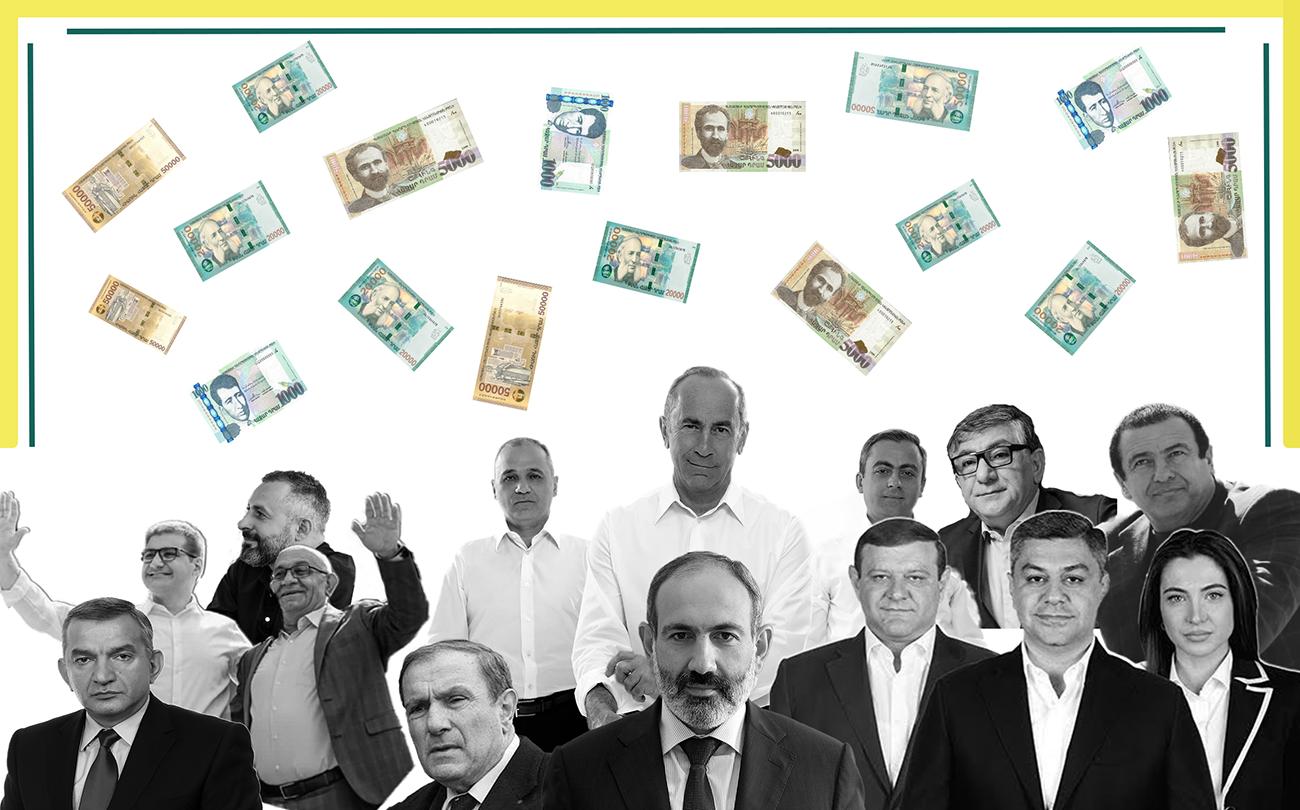 This election’s political campaign was mainly financed by officials, businessmen, and the candidates themselves who were on the ballots. The latter, however, mostly did not donate money from their personal funds but rather received help from relatives and friends living abroad and even took out loans.

The Hetq Media Factory team investigated the financial movement of pre-election funds on behalf of the political forces participating in the elections that took place from June 3-16, 2021. We analyzed roughly 1,100 pages worth of bank orders for donations.

The Civil Contract Party, Armenia Alliance, and I Have Honor Alliance received the most donations. Below we present details about the parties’ and alliances’ donors: 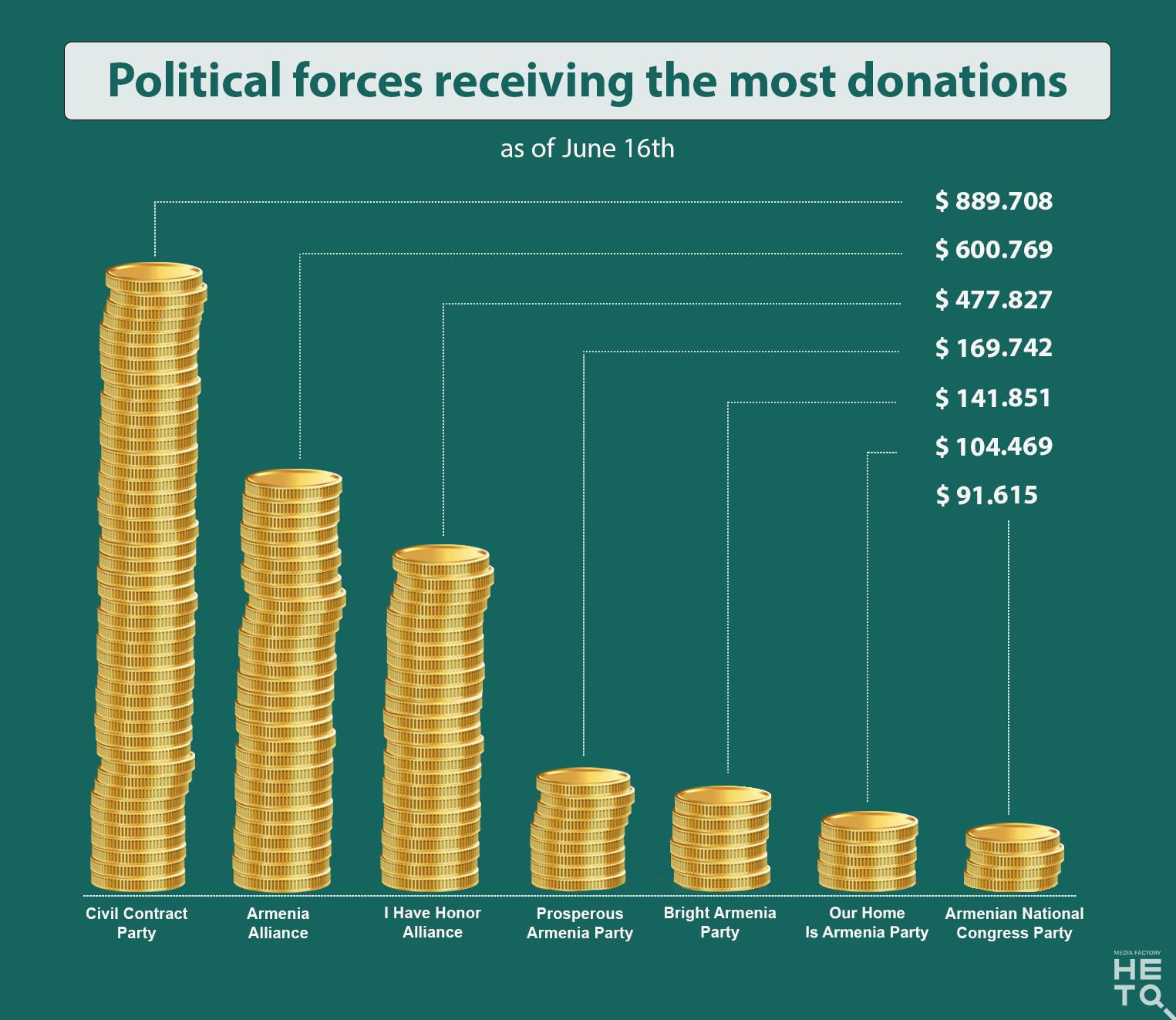 Money was donated to Civil Contract by governors, heads of departments, members of the Council of Elders, community leaders, and other employees of the state apparatus, as well as medium and large business owners.

It is noteworthy that those mentioned live in different regions of Armenia, yet their donations to the Party's pre-election campaign were all transferred on June 8th from the same Armeconombank transit account at the main branch in Yerevan. Let’s remember that candidate number five on the Party’s pre-election ballot was businessman Khachatur Sukiasyan, one of the bank's shareholders.

We talked to the Party representatives to clarify the situation.

Civil Contract Party MP candidate and former Chairman of the State Property Management Committee Narek Babayan clarified that they held a fundraiser that was attended by “people with various financial means” and candidates. The money that was collected “on behalf of candidates and not only on behalf of candidates” was transferred to the pre-election fund account.

Babayan also noted that he personally deposited cash at Armeconombank. To the question of how all the donors decided to deposit money at the same branch of the same bank, Narek Babayan answered: “If that money was taken from somewhere and paid somewhere, it’s logical that it would be the same place, right? If everyone [donated] from their own pockets, what you said would be true, but I’ll say it again: It was taken from the office and deposited,” explained Babayan.

Regarding the question about whether anyone took money from the office and deposited it into the pre-election account on behalf of 400 people, Narek Babayan answered, “I myself deposited it. I don’t know about others, because it was proposed who would do what on which day. When it was convenient for me, I went to the office, took it… I don’t even know if there was one person, for example, who did it using the power of attorney. I still don’t see any issue with that, but I myself took it. I don’t know about anyone else. I went early, and I don’t know about any other people. I didn’t see any of our people,” said the candidate.

The purpose of the donation was a “candidacy fee”

To the question of whether the Civil Contract candidates running in the elections had to pay a candidacy fee, MP, member of the party board, and candidate Vahagn Hovakimyan answered, "At the bank, when the candidates went, the bank just put it that way in order to differentiate if a candidate is the payer, regardless of whether it was 500,000 or 5 million drams. They do this so that the bank employee doesn’t make a mistake and understands which candidate is giving the money, since they present their ID to the bank,” said Vahagn Hovakimyan.

We asked Mr. Hovakimyan if the bank employee decided what to write in the memo. “No, the bank employee asked if they could write it like this and the candidate said okay. Where’s the violation there? Can you tell me?” he answered.

According to declarations submitted to the Central Electoral Commission, some of the candidates who donated 5 million drams to the Civil Contract Party have annual incomes that are less than this amount, while others do not even work and do not have assets.

Speaking about this issue, Vahagn Hovakimyan said that candidates can donate money raised from relatives, acquaintances, and friends for the campaign.

MP and candidate of the ruling party Maria Karapetyan, for instance, was guided by this principle. Her annual income and assets together do not exceed 6 million drams; however, she recently donated 5 million drams to her party’s campaign.

In a conversation with us, the MP said that she transferred money that she received from acquaintances to the fund. The MP also noted that she will declare the funds next year on her asset and income declaration form.

"I have a brother who lives abroad."

"I have sisters living in the United States."

"Grandmothers who left us savings."

"I borrowed from a very close person."

"Why do you assume we are so poor?"

These are quotes from the candidates who answered our question as to how they were able to donate millions to political forces when they didn’t have sufficient income.

While researching pre-election campaign finance, we noticed that MP candidates generally donated 5 million drams, which is the maximum allowable threshold. Some of those candidates, however, do not work and do not have income or assets.

We talked to candidates from all the parties/alliances who made donations while not having sufficient funds.

As of June 16th, the Armenia Alliance received a total of 309 million drams in donations.

Sargis Karapetyan is number 56 on the Armenia Alliance pre-election ballot. He does not work, and he has declared 3,210,000 drams in annual income as well as $1,000 and 6,500,000 drams in assets. Karapetyan donated 5 million drams to the Alliance’s pre-election fund. In a conversation with us, Karapetyan noted that he donated money from his own assets but did not wish to explain where the money came from.

"I am not working at the moment, but it’s not as if I haven’t worked. I can’t elaborate now about when I started or stopped work. I’m 42 years old and have almost 28 years of work experience,” he said.

Alliance candidate Siranush Hovhannisyan also does not work and donated 5 million drams to the campaign. In a conversation with us, she noted that the money was transferred from her personal funds. She has no income but declared around 7.4 million drams. She said that she worked for many years, was well-off, and had no need to spend money. “I also have sisters abroad, both in America and Russia. My sisters made sure that I didn’t have any problems.”

To the question of how she donated most of her savings to the Alliance while having such a low salary, Susanna Poghosyan replied, “I also receive donations from abroad. I have savings – grandmothers who left us savings.”

I Have Honor Alliance

We talked to Sonya Harutyunyan, number 64 on the I Have Honor Alliance’s pre-election ballot, who donated 2 million drams to the campaign. Harutyunyan works at the Araratbank OJSC, making an annual income of 3 million drams. In addition, she also declared 5 million drams in assets.

Sonya Harutyunyan was on a bus at the time of our call. The candidate noted that she had been setting aside money for a long time in order to buy a car. She allocated 2 million drams of this money and deposited it into the I Have Honor Alliance account.

To the question of whether it was expedient to donate the money collected over a long period to the I Have Honor Alliance when she is number 64 and her chances for becoming an MP are not great, Harutyunyan answered, “Well, at this moment we can’t say if the chances are great or not. In any case, it’s my choice. I decide for myself how to spend my money.”

As of June 16, 2021, the Prosperous Armenia Party received 87 million drams in donations.

Party candidate Markos Harutyunyan noted that he does not work but that he is a member of the Yerevan Council of Elders. According to his declaration, he received 816,000 drams from the Yerevan municipality as a payment equal to salary. He also declared 3.7 million drams and $10,000 (approximately 5․2 million drams) in assets.

Harutyunyan noted that he donated money from his assets to the Party campaign. To our question of where he got his assets from when he is not working anywhere, Harutyunyan replied:

Tigran Muradyan, Prosperous Armenia Party candidate number 82, also does not work and did not declare anything. To our question of how he donated 5 million drams to the Party's pre-election fund, Muradyan answered that he had $10,000 in savings set aside for his old age that he instead donated. Tigran Muradyan is 57 years old.

“I think that my colleagues–no, I shouldn’t say colleagues. My new friends who believe in me and those who I believe in... They will help me in some way and be useful. I don’t know. I will work in some capacity,” said T. Muradyan.

As of June 16, 2021, the Armenian National Congress Party received 47 million drams in donations.

Samvel Abrahamyan, Armenian National Congress Party candidate number 8, donated 5 million drams to the pre-election fund. He does not work but has assets: $8,000 (4,160,000 drams) and 2 million drams. He declared that the designated funds came from his savings, but the 5 million that he donated did not come from those savings.

"That is what I have left over. I still have a lot, and I can donate it. Why do you assume that we are such poor people? It’s not like the state forbids us to work,” said Samvel Abrahamyan.

Abrahamyan added that he makes a lot of money in a field that is not regulated in Armenia: the cryptocurrency market.

As of June 16th, 73 million drams were donated to the pre-election fund of the Bright Armenia Party.

According to her, she was supported by like-minded people, friends, and family to raise money. “I am ready to donate much more if that would help us. At this stage, I think it will help us, as much as possible, to impose our agenda on irreconcilable political forces,” said Avagimyan.

Our Home is Armenia Alliance

As of June 16th, 53 million drams was donated to the Our Home Is Armenia Alliance.

We were unable to connect with MPs from the Alliance who made donations. After speaking with several members of the Alliance, we learned that they do not have a spokesperson. We got in touch with Arshavir Abrahamyan, who recently became president of the Our Home Is Armenia Alliance and is the nephew of Ara Abrahamyan.

Mr. Abrahamyan gave the following explanation about the Alliance’s situation:

"We do not have a spokesperson, since the decision to run in the elections this way was hasty. We planned to run alongside another party, using another format. That’s why the structure is not completely developed.”

To the question of which party they were seeking to run with and which format, Mr. Abrahamyan preferred not to reveal how he became the president of the Our Home Is Armenia Party. He answered, “We hastily decided to enter the election and Chibukhchyan, the former President of Our Home Is Armenia Party, helped us. He then left the Party and decided not to participate.”

We had a phone conversation with Vachagan Chibukhchyan, the Founder of the Our Home Is Armenia Party, who was president until May. He clarified, “I handed the Party over. I have nothing to do with the elections. Everything is all mixed up now, and I have no part in anything.”

We continue to investigate not only donations made to parties and alliances but also the parties’ expenses. We will publish the results of that study in the near future.