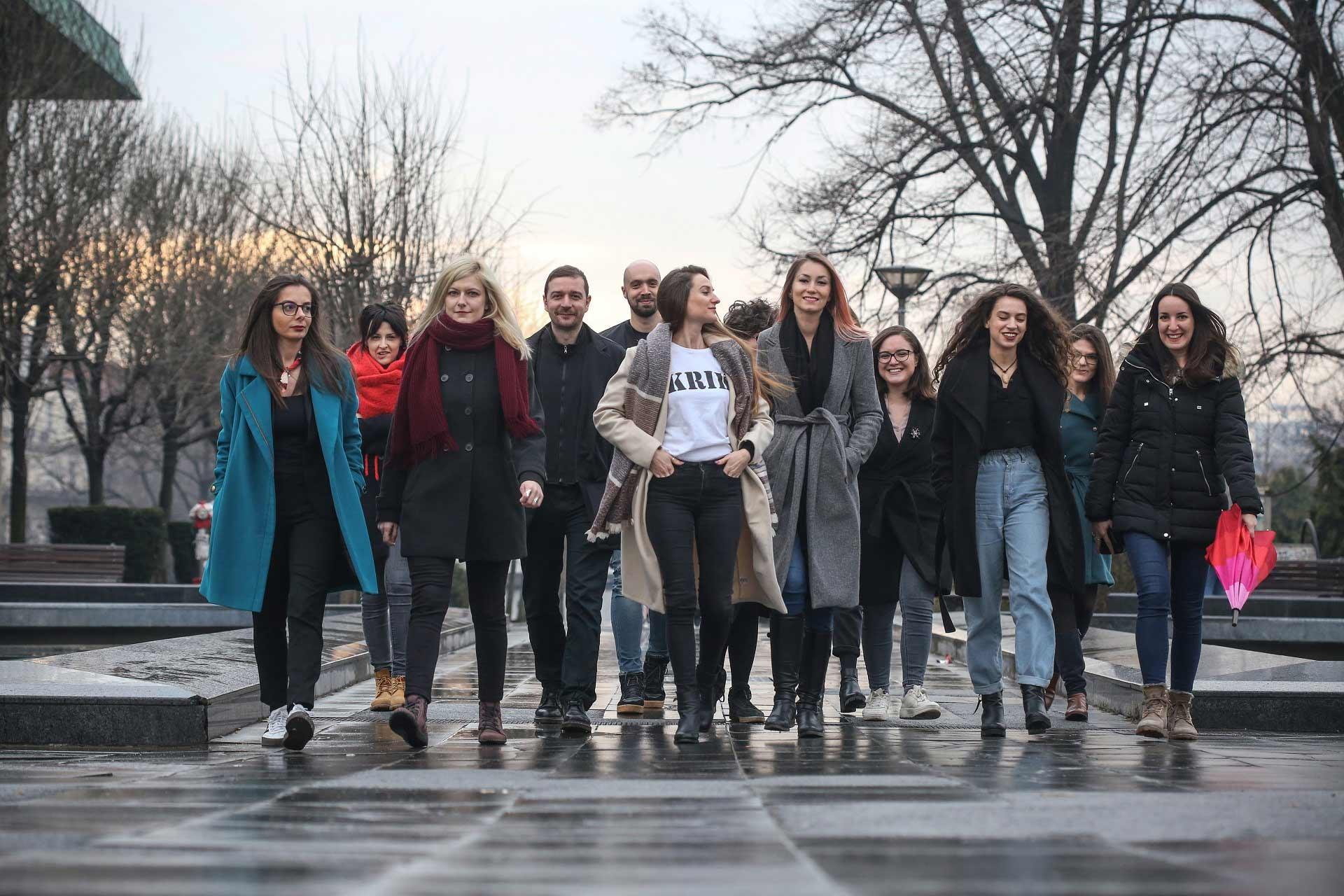 Serbian Investigative Journalists Are Fighting to Stay Alive. Will Europe Hear Them?

The European Union has praised Serbia for its commitment to “fundamental reforms,” and the country’s drive for membership is grinding forward. Meanwhile, a campaign of pressure and intimidation against independent journalists is ramping up in Belgrade.

“I will kill and burn you all,” the tweet read.

“Just last week we received several more threats, including this one,” says Stevan Dojčinović, the 36-year-old editor-in-chief of KRIK.

Since its founding in 2015, the award-winning Serbian investigative outlet and OCCRP member center has uncovered countless schemes involving criminals, corrupt officials, or both at once. In return, KRIK’s staff of 14 young journalists has withstood pressure most people can scarcely imagine.

“I went through everything that happened in the last six years,” Dojčinović says. “It’s crazy when it’s like this, in one place. Spying, deportations, media campaigns, investigations, threats.”

Earlier this year KRIK faced perhaps its most dangerous moment yet, when the country’s malevolent, government-connected tabloids painted a target on Dojčinović’s back by associating him with a murderous criminal group. But now, the threats are coming from another direction: The Serbian court system. With three new lawsuits filed just last month, KRIK now faces an incredible nine cases at once.

The campaign against the outlet stands in striking contrast to the praise Serbia’s government has been hearing from the European Union on its reform efforts.

“You have done a lot of hard work. This hard work pays off,” said Ursula von der Leyen, president of the European Commission, on a recent visit. “It is amazing to see the progress.”

Her audience included Serbia’s President Vučić, whom she addressed three times as “dear Aleksandar.” And while she noted that the country still had work to do, the problem seemed to be a matter of not-quite-sufficient technical competence. “It is essential to progress on the rule of law,” she said. “I know that you are working on it.”

Meanwhile, nearly all of the men who sued KRIK have some connection to Vučić or his ruling party. One is the head of the intelligence service. Another, who has family members in parliament, joined Vučić on the campaign trail. And one who asked not for monetary damages, but jail time for two KRIK reporters, is the president’s kum — a sacred designation roughly equivalent to a blood brother.

Their lawsuits represent “another attempt of the ruling party to silence and criminalize investigative journalists,” says Maja Bjeloš, a researcher with the Belgrade Center for Security Policy. “The media and civil society in Serbia are perceived as ‘enemies of the state’ because they represent a corrective factor and one of the few barriers to full autocracy.”

Some would disagree with this grim assessment, pointing to how far Serbia has come.

It has been barely 20 years since the overthrow of Slobodan Milošević, a corrupt demagogue who had ruled since the days of communist Yugoslavia. Since then, Serbia’s economy has grown by leaps and bounds. It has made progress on normalizing its relationship with Kosovo, a largely Muslim country that broke away and has proclaimed its independence. And it has taken step after halting step to bring its institutions in line with EU standards. Just weeks ago, the country’s accession process made another advance, with the opening of several new “clusters” of negotiation.

But the ferocious campaign unleashed against KRIK illustrates the folly of treating the creation of a democracy as a box-ticking exercise. In response to criticism, the Serbian government has created media strategies, action plans, and so many working groups they’re difficult to tell apart. There is a functioning legal system — after all, journalists are routinely sued even in the world’s most democratic countries.

But counting this as progress, experts say, is little more than empty formalism.

“All the laws on paper look very similar to what we might encounter in the U.K. or Canada or Germany,” says Jasmin Mujanović, a political scientist and southeastern Europe specialist. “But it’s in how the laws are actually exercised, or how the institutions operate, that we see their true nature.”

Disregarding this, he says, grants the Serbian president a veneer of plausible deniability.

That’s how KRIK’s journalists see it too.

“It’s like we’re pretending to be a democracy,” says Bojana Jovanović, the outlet’s deputy editor. “And because it’s a democracy, anyone can press charges or sue anybody else. I think that will be the explanation from our government, and from the ruling party. But these are definitely more than ordinary lawsuits, because most of the people are connected to the system.”

The lawsuits, which range from the questionable to the absurd, are indeed extraordinary.

In one case, three policemen sued Jovanović over a story written by a different KRIK journalist named Bojana. In another, a businessman sued for reputational damage and mental anguish because KRIK described him as an “accused narco boss” — in a story about how he’s on trial for growing over a ton of marijuana. And in the criminal case brought by Vučić’s “blood brother,” he is asking the court to jail two KRIK reporters for publishing his “personal information,” even though the story only examines his businesses and offshore companies.

But though many of the suits have a comic element, there’s nothing funny about the threat they pose. If KRIK loses them all, the damages would add up to nearly a million dollars, or three times its yearly budget. Even if the outlet wins everything, it will face considerable legal costs.

Perhaps more harmful still are the countless hours reporters and editors must spend doing legal battle instead of journalism.

“We have to work with our lawyers, we need to prepare for trials, we need to go to hearings, and that means that we need to spend a lot of time fighting,” says Jovanović. “It’s not just the money, it’s the time. And time means that our work is waiting for us to come back to it.”

There’s an additional element of absurdity in the fact that all of this careful work concerns lawsuits that have little to do with the facts. One hint is that none of the supposedly aggrieved parties ever contacted KRIK to ask for corrections or clarifications. In many cases, they never even responded to requests for comment before publication.

“They don’t care too much about the results, actually,” said Rade Đurić, a lawyer with the Independent Journalists' Association of Serbia. “It’s not even kind of a blow to the budget. The idea is to create a specific situation in the KRIK editorial room. It’s a kind of huge pressure.”

Beyond the specifics of the claims, both KRIK journalists and outside experts note, the legal onslaught should be viewed in context of a larger state-directed flood of abuse that flows through many channels. Aside from lawsuits and official investigations, the outlet has faced a torrent of slander from members of parliament and, perhaps even more dangerously, popular pro-regime tabloids.

“This is Serbia's specialty,” Dojčinović says. “Brutal media campaigns that crush everyone without mercy.”

“Literally every week, sometimes every day, I appear in pro-government outlets where they present me as a spy, a foreign agent, a mafia figure, or a terrorist,” he says. “They also expose details from my private life. My chat conversation with my ex-girlfriend was in the newspapers.”

The unitary nature of the attacks — from the press, from the state, from individual officials — is hard to prove, but KRIK’s supporters know it when they see it.

When a story is disliked by top officials, “the editors and owners of the tabloids react instantly,” Đurić says. “First of all, personally, on social networks. A few hours later or the next day, you have a reaction in the tabloids.”

"I can’t connect them [to government figures] directly, I don’t have proof,” he admits. “But when you see that kind of reaction in 10 or 30 minutes, you can see that they’re defending them. In addition, all these tabloids are co-financed by the state.”

In such an environment, the state’s assurances that it’s creating structures to protect journalists ring hollow. Sometimes they do useful work, Đurić says. But his organization, along with several others, quit a working group convened by the government when it remained silent in the face of the tabloids’ onslaught on KRIK earlier this year.

“In that government group we have some members of the executive, which are actually the biggest problem,”  Đurić says. “How can we talk with them? If the concrete pressure starts from the prime minister and you’re sitting in the same room with the prime minister? What is there to talk about, if they started the pressure last night?”

Article 19, an international organization that promotes freedom of expression, conducted a virtual fact-finding mission to Serbia earlier this year. After meeting government officials, journalists, and specialists, its report concluded that the environment for journalists’ safety had deteriorated, and pointed out that state efforts were insufficient.

“You can establish all these paper tigers,” says Sarah Clarke, Article 19’s head of Europe and Central Asia. “But without political will, nothing can happen.”

“Serbia has an obligation to create an enabling environment for media freedom,” she says. “They are not. They are creating a restrictive and dangerous environment by a lack of sanctioning for the political rhetoric that is used against journalists. And we know where that language emanates: at the highest levels of power.”

What does this mean for the European Union, which proclaims “respect for human dignity, freedom, democracy, equality, the rule of law and respect for human rights” as its most fundamental values?

“They listen to our concerns,” said Roberta Taveri, an Article 19 media freedom specialist. “What they actually do is a little unclear, because the situation is not necessarily improving, except at a formal level.”

But the lumbering EU accession process is grinding ahead.

“Traditionally the EU has really only been interested in a very shallow box-ticking,” says Mujanović. “This is not a recent phenomenon, the pronounced democratic decline in Serbia. And yet, with some regularity, the current Commission has praised Serbia for its reforms.” (President von der Leyen’s office did not respond to requests for comment.)

As political scientists never tire of explaining, even the best institutions are hollow unless they’re imbibed with an animating democratic spirit — a will to use them to democratic ends.

In Serbia, Mujanović says, “the ghost in the machine is not a ghost. It’s just a corpse.”