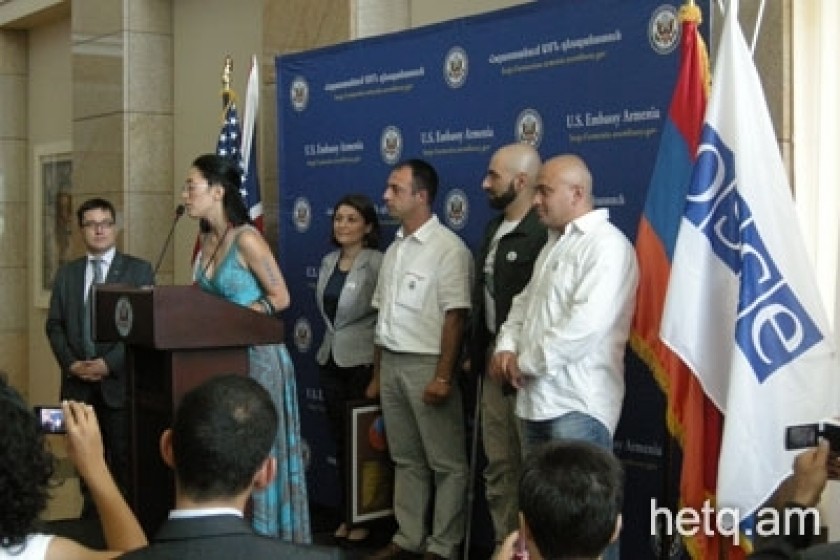 U.S. Secretary of State, Hillary Clinton, joined the U.S. Embassy, Counterpart International, the British Embassy, the OSCE, and the EU to honor individuals working to promote human rights, accountable governance, and free speech in Armenia at the Universal Rights Awards Ceremony at the U.S. Embassy in Yerevan.  Secretary Clinton delivered remarks at the event and met privately with the award recipients.  The Universal Rights Awards Ceremony was the first multi-mission initiative to highlight the contributions of Armenia’s civil rights activists, government officials, and media representatives to the promotion of human rights.  Armenian government officials, foreign diplomats, NGO representatives, and the press attended the event.

USAID/Armenia Mission Director, Jatinder Cheema, opened the ceremony and awarded Artur Sakunts with the Freedom Defender Award.  “Artur defends all minorities, especially those that are the target of intolerance, such as ethnic, religious, and sexual minorities.  He is not afraid to take unpopular stances, working constantly for a more tolerant Armenia,” said Director Cheema.

Counterpart International’s Chief of Party, Alex Sardar, presented the Woman of Courage Award to Tsovinar Nazaryan for her military reform efforts.  “Tsovinar should be proud of her role in encouraging the military to embrace reform, which will lead to a more modern, effective, and humane force for Armenia,” Mr. Sardar said.

The British Ambassador to Armenia, Jonathan Aves, recognized the Deputy Chief of Police, Major-General Artur Osikyan, for his contributions to police reform, especially regarding improvements to the police educational system.  “Artur Osikyan has helped lay the foundation for transparent and accountable police force that works for the citizens of Armenia,” Ambassador Aves said.

Presenting the award for media excellence to the editors of Epress.am -- Sonya Apresova, Yuri Manvelyan, and Armen Melikbekyan -- the Head of the OSCE Office in Yerevan, Ambassador Andrey Sorokin, commended them for their fair and balanced coverage and commitment to human rights reporting.  Ambassador Sorokin stated, “Epress’s coverage of human rights plays an important role in informing the public and contributing to public debate.  This type of reporting is an important element in Armenia’s democratic transformation.”

The EU Head of Delegation to Armenia, Traian Hristea, awarded environmental activists -- Apres Zohrabyan, Yeghia Nersesyan, Gor Hakobyan, Mary Khachatryan, and Ruzanna Grigoryan -- for their grassroots campaign to promote environmental conservation in Armenia.  "It is the commitment and perseverance of many civic activists that led to important victories for the environment this year.  With this award, we would like not only to honor their work, but also to promote their future efforts in Armenia," said Ambassador Hristea.