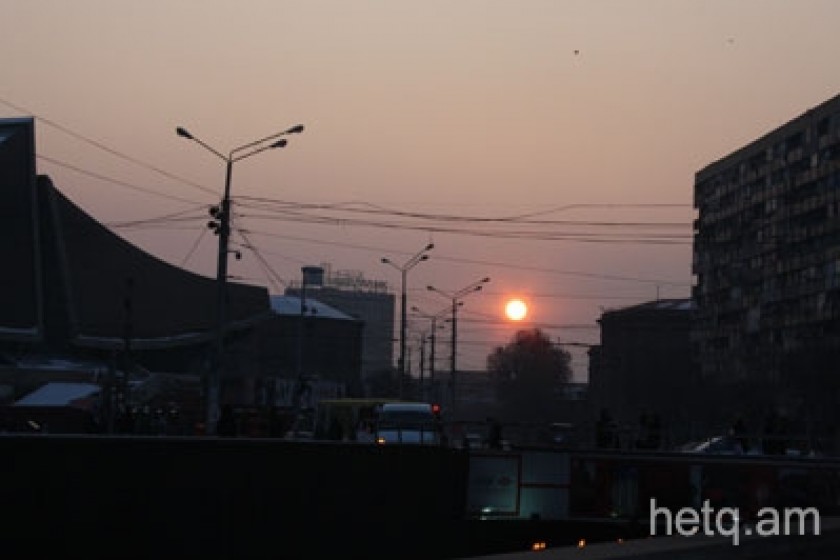 On my recent trip to Los Angeles, I met up with Gegham, a middle-aged man who hails from the village of Verin Artashat in Armenia.

He’s been working in a Glendale “shawurma” joint since he arrived in 2003.

So you’re a reporter from Armenia – Gegham says.

I then ask Gegham why he doesn’t go back.

I’m going back. This time for good – Gegham says.

Verin Artashat is a village in Armenia’s Ararat Marz. Glendale, tens of thousands of miles away in southern California, is considered the most concentrated community of Armenians outside the homeland.

Gegham tells me about the fields he left behind and how his brother now tends to them. Gegham has a total of two brothers and four sisters; all in Armenia.

“I fear I might go mad before I ever get back,” Gegham tells me.

During my two week trip, this was the second Armenian citizen who was counting the days before returning to Armenia.

“I follow all the news and know what’s going on back home. I spend my days here reliving that life,” says Gegham, and he begins to ask questions about the elections and various political figures.

Gegham says his son runs a profitable business in Glendale and that he no longer feels the need to stay.

“My son can make it on his own. I’ve miss working the land and want to get back.”

He asks about life in Armenia and I tell him things are bad since so many are leaving.

“There is no one who wants to change things,” I explain.

“That’s what we all say, that nothing can change. So we all leave. I’m guilty as well,” Gegham replies.

Gegham brings me a platter of fries and says – it’s on the house.

I was with the daughter of a friend. We had gone out to buy presents for the people back home on my last day in California. On the way back, the girl said we should get a bite to eat at a shawurma place.

She blasted some music on the car’s stereo. It was deafening – “Yerevan, Yerevan, I’m coming back, coming back to stay....”

I had heard this song before, but this rabiz melody really grated on my brain like never before. Here, on the quiet suburban   streets of Glendale, this rabiz music blaring from open car windows hits you like a mine exploding in your ears.

I don’t like this city. I have been constantly barraged by stories told by my former countrymen who now call Glendale “home”. It’s a constant assault on the senses. It’s an assault of charges and counter-charges. Oftentimes, people demand justice from me for the conditions back home. Go figure.

There are even Armenians here who fought in the Artsakh War. They have their own little groups and preach patriotism, replete with song and dance. At one such encounter, I found myself unwittingly whispering some lines from “The Vision of Death” by Yegishe Charents. Images flashed before my eyes of those who had left Armenia. Those images included the faces of my friends and acquaintances as well.

Like a taut string of a discarded cello,
My heart trembles with an awesome longing—
It is the summit of my yearnings—the last lyre!
A sturdy rope and two crossed beams.
As the dark derision of my fate, or
An old, miscarried promise that I betrayed—
Behold, the beams of the gallows standing
Proud in the city, waiting for the condemned!
They stand, silent, leaning on each other,
paired pieces of wood,
And in the center quivers, loose and swaying,
A rope, as gray—in these sad days—as the doused
sorrow of my orphaned Nayirian soul.

No, I do not like this town. After talking to my former countrymen I am reminded of the gallow beams in the poem by Charents. I don’t understand why these people talk so much about the problems back in Armenia. Why should they care?

“Yerevan, Yerevan, I’m coming back, coming back to stay....” And then they’ll go to feast on some khash and khorovatz.

And that’s what these people will do; those who sing along with the lyrics of this melody.

They’ll come back just to eat and drink – to taste the country.

Armenia is a word in one of their songs. They need Armenia in order to sing.

They say it’s a form of cultural preservation – hayapahpanoum...

By singing patriotic songs on foreign shores you can’t build a homeland that is being emptied slowly but surely.

Almost a century ago, an Armenian writer captured the mood of the times with his - Retreat without Song.

Today, we proudly sing about our collective retreat.

Saying goodbye to Gegham, I tell him we’ll meet up back in Yerevan.

I know he will return to Verin Artashat and leave the singing to others.