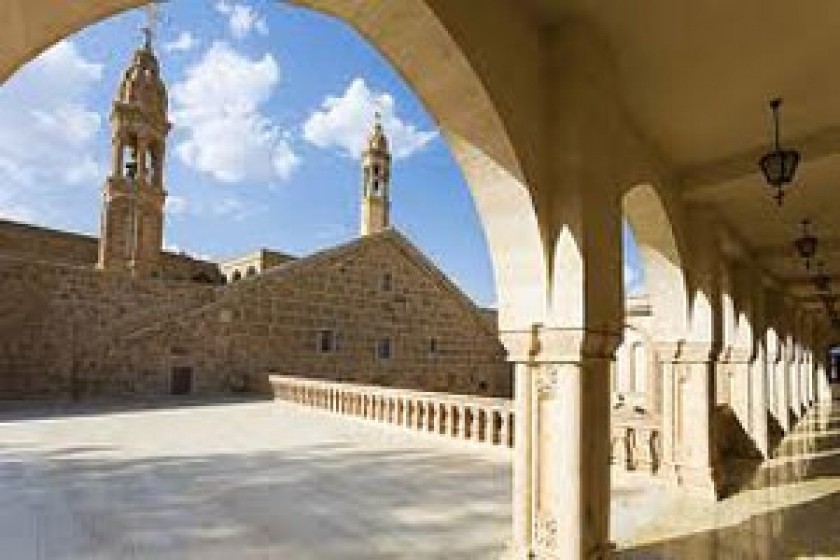 Petition Campaign to Save Historic Syriac Orthodox Monastery in Mardin

Some 300 writers, academics and artists in have joined   a petition campaign to protest a verdict by the Turkish Supreme Court of Appeals to nationalize the estates of the Mor Gabriel Monastery (Mardin), the oldest surviving Syriac Orthodox monastery in the world, dating back to 397 AD.

Established in 397 A.D., the Mor Gabriel Monastery bears exceptional significance for Syriacs, as it stands on par with Muslims' "Al Aqsa Mosque" for the Syriac community, trains half of all their clergy and has enabled the survival of the Syriac language, according to Tuma Özdemir, the head of the Mesopotamia Culture Association.

Prof. Cengiz Aktar, Tuma Özdemir and Tuma Çelik, the owner of the Mardin-based Syriac journal Sabro, came together in Istanbul's Cezayir Meeting Hall to expound on the petition campaign entitled "Turkey is the Syriacs' Homeland, and the Mor Gabriel Monastery is not an Occupier."

Around 20,000 Syriacs are currently living in Turkey. 15,000 of them reside in Istanbul, while the rest reside in Mardin and its vicinity.

Sarah Collins 2019-01-25 08:28:40
Everyone has the right to worship as they choose and to be left in peace. The state authorities have no right to take over religious buildings in this way - in any country. They were built by the religious communities and they belong to them. I am very sad to read about these dreadful events and I hope that the persecution of your church stops.
Aniss Ibrahim Sowmy 2019-01-25 08:28:40
Unfortunatelly for centuries our community has been persecuted, our family members killed, did anyone ever hear or new of any support coming from the pseudo-civilized occidental economies? No! on the contrary even Churchil said that the Syrians, Assyrians, Chaldeans, and other Christian communities in Turkey would have to be left on their own destiny; i.e. thhey must die for the economic interest of the European power... Alas, but now the cancer of the East reached Europe, let us see from now on what will be their fate! Only remembering the Sowmy family of Tur Abdin was almost all of it killes by the Turks, Kurds, & Co. The last martyr of this family was Rev. Boutros Sowmy in Jerusalem, he was killed in the Monastery o Saint Mark - 1949 - in the clashes of the Arabs and Jews...
Monson Varghese 2019-01-25 08:28:40
Too bad.This ancient monastery is very important for the Syriac Christianity.The Govt of Turkey is playing to the tune of Islamic fundamentalists .The Indian Government can take up this issue with the Turkey ambassador
zohrab 2019-01-25 08:28:39
turkeys supreme court is supreme mafia court
vergili 2019-01-25 08:28:39
merci
Rona 2019-01-25 08:28:39
When will they stop persecuting us???? Centuries of proof is not enough for them, they come around with dirty accusation!!!! When will they stop persecutions.. It seems every Century they a different method of persecution.. Pity what a Pity...