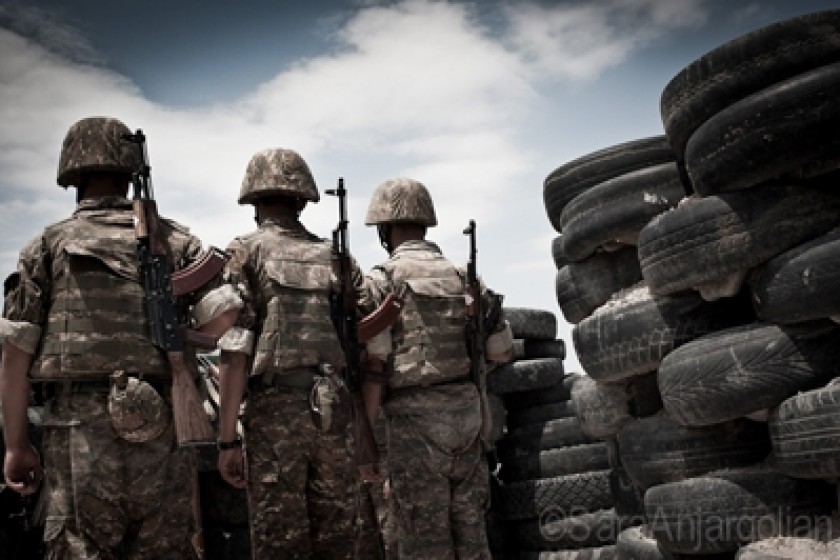 Unsung Heroes: Orders Are Not to Write About Some Serving on the Artsakh Frontline

I was back in Artsakh after three years with a group of journalists intent on covering the situation at the frontlines. It was like a trip back in time.

I was again headed to the defensive positions of the Artsakh Army in the Martakert district. We were again being transported in two army jeeps.

The jeep in front, carrying the unit commander, was raising a cloud of dust that blew right through the windows of our jeep in the rear. Under the blistering rays of the afternoon sun, we would have wilted from the heat if we closed the jeep windows.

I asked our driver to fall a bit back from the first jeep to avoid the oncoming cloud of dust.

“Sorry, that’s impossible. The commander’s jeep must always be in plain sight,” the driver replied.

So those of us in the rear jeep had to grin and bear the suffocating dust, hopeful that we’d soon reach the military unit.

The noted photo-reporter Gagik Shamshyan was also in our intrepid group. Suring the bumpy and dusty ride, he was peppering our escort, Lieutenant Colonel Hrachik Makyan with questions to which the officer calmly responded.

Along the way, Makyan would point out the defensive fortifications installed by the Artsakh Army to halt any offensive incursions by the Azerbaijani forces.

“During the past few years, both sides have really prepared their defensive positions quite well,” noted Makyan, adding that the side which attacks first will sustain heavy losses.

We finally make it to the frontline. The area in front is completely mined and strung with barbwire. 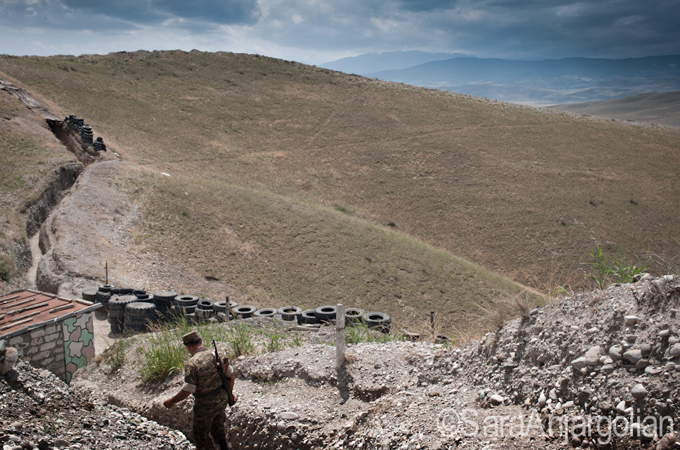 I think about the periodic diversion incursions attempted by both sides and how it’s possible to make it through such defensive fortifications.

My mind recollects those famous Armenians known for their stealth and skills in penetrating the enemy’s defences and creating havoc within their ranks.

Little is known about these “raiders” and the commander says that’s the way it should remain.

“Our boys on the frontline are ready for any diversion that the enemy might hatch. They meet this challenge with pride and conviction. It’s a matter of courage above all else,” he says.

At the next defensive post we visit, we meet some one of these nameless raiders who has been decorated for his bravery. I’ll call him Armen in this report.

Armen relates that he and two others infiltrated an enemy position as pay back for last month’s raid on the village of Chinar. They were instructed to indirectly inflict damage within the enemy’s ranks.

The Armenian soldiers planted two mines. One went off killing two enemy soldiers; one was an officer. The other is still waiting to be tripped.

Armen tells me that the chances of making it back safely from one of these forays is 50/50. He adds that the odds can be greatly boosted in favor of returning if you “keep focused and organized.”

The 30 something Armen tells me that he doesn’t have a serious military education.

“Sure, I took a bunch of training courses in Yerevan, but the rest is on the job learning,” he says.

His army buddies quickly add, “Hey, Armen is from Karabakh. Those guys are born with military expertise.”