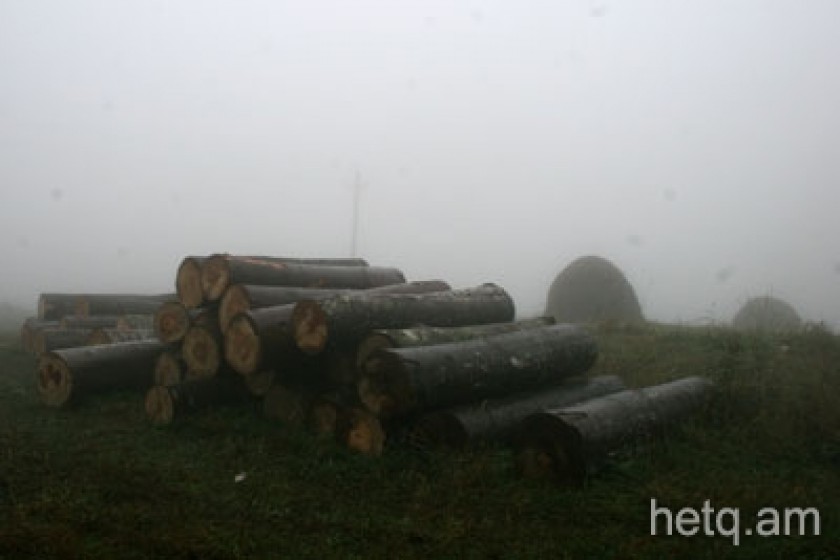 Logging: The Thin Line Between Business and Organized Crime

Trucks with no license plates. Loggers not carrying permits, as required by law. The buzz of chainsaws despite the fog and light rain. Lori, one of the most heavily forested regions in Armenia, is rife with illegal logging.

Even on Sept. 21, 2011, a quiet day when Armenia celebrates its independence, a team of reporters was able to watch trees being felled and transported away without surveillance by the Jiliza Forestry Branch of Hayantar, a state organization charged with protecting forests.

The only sight of a forest warden happened in the town of Alaverdi, where the reporters parked their car earlier that day. Upon the reporters' return, they were surprised to find warden Henrik Mosinyan next to their vehicle waiting for them.

He offered to talk and they arranged an interview for the next day. Together with Mosinyan and Aram Baroyan, director of the Jiliza Forest Branch, the reporters visited the spot where the logging had happened.

This time there was no rain, and no chainsaw buzz. Baroyan said the logging the reporters had witnessed was legal and that it had been allowed because larger trees were preventing the growth of smaller ones.

Around him, the remains of smaller trees smashed when the large trees were chopped down the day before seemed to belie his explanation.

Asked to show the permits, he said he didn’t have them handy. “I can show them to you later,” he offered, but the documents were never disclosed.

Asked why unlicensed trucks were allowed to carry away wood, he said he is “not responsible” for the trucks. He did say “it’s out of the question” that any trees could be transported out of that forest without his knowledge.

Illegal logging, whether carried out entirely without a permit or in quantities larger than those allowed, is periodically covered by the Armenian press, but also periodically denied by Hayantar, the agency attached to the Ministry of Agriculture. 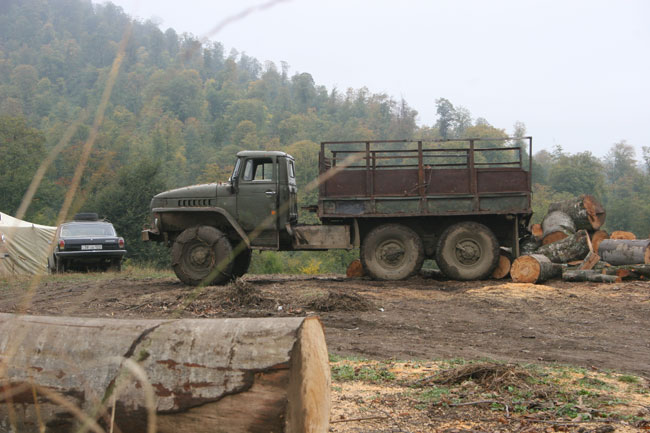 Hayantar’s duties not only include conservation but also harvesting timber, processing it at lumber mills and selling it at lumberyards or exporting it. This dual role is also seen in some Hayantar employees, who are involved in the lumber business.

Police investigations revealed in 2011 a number of abuses allegedly carried out by Karast Ltd., after the company was hired by the mining firm Teghut Ltd. to clear away the forest for the start of a mine. About 5.6 million Armenian Dram (US$14,000) worth of felled trees disappeared.

Members of the army, military police and local councils are frequently among those who own sawmills.

Transporting illegally obtained wood, usually in covered vehicles, is not too difficult. A driver of a truck selling wood in Yerevan confessed, on condition of anonymity, that he buys a permit to log 30 cubic meters of wood from the forestry enterprise and uses it to log twice and sometimes three times as much.

During a discussion in the “Stable Forestry Regulation” seminar in 2011, Gagik Amiryan, Chief Forestry Warden at the Gougark Forestry Enterprise, said, “This is not a forestry business, but an organized crime.”

A 2011 study by the International Union for Conservation of Nature (IUCN) and the International Center for Agribusiness Research and Education (ICARE) about the impact of illegal logging, found evidence that permits granted by Hayantar are routinely abused for multiple loggings.

It also determined that gaining entry to the forest has become easier and that there are significantly more loggers than in 2003.

Widespread small-level logging also seems to be on the rise. Eighty percent of Armenia’s population heats their homes with natural gas, but residents in rural areas say that for the monthly price of heating their homes with gas – about 30,000 AMD (US$80) – they can bribe the local forestry warden and cut wood to heat their homes for an entire winter.

Additionally, with the global economic crisis, the population officially labeled as “poor” in Armenia reached 37 percent, and as a result, more people are using wood as fuel. 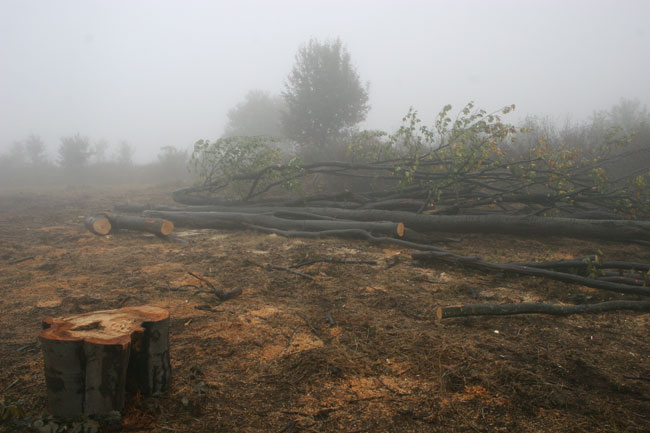 Environmental organizations say that illegal tree logging is increasing, but Hayantar says the opposite.

But Hayantar hasn’t conducted a new inventory of Armenia’s forests, and photos taken by the U.S. National Aeronautics and Space Administration (NASA) show forested areas were only about 8 percent of the territory in 2001. “Analyzing the NASA images, some 48,000 hectares were destroyed just in the 1990s,” said Karine Danielyan, head of the Association for Sustainable Human Development.

Hovik Sayadyan, a lecturer at the Armenian State Agrarian University’s Department of Forestry and Agro-Ecology, says that even official documentation renders Hayantar’s statistics not credible.

According to him, these figures have been deemed dubious by studies like the National Forest Project adopted in 2005.

This year's ICARE research report found that, “It is evident that official statistics under-represent the figures by a factor of 80.”

While Hayantar insists that around 75,000 cubic meters of timber are logged yearly, independent studies suggest much higher numbers.

A 2009 survey by the non-governmental organization the Greens’ Union of Armenia (GUA) interviewed household members in communities adjacent to forested lands about the amount of wood used for fuel in the course of a year. “Our calculations indicate that between 1 (million) and 1.3 million cubic meters of wood is logged every year,” said Hakob Sanasaryan, GUA chairman.

A similar study by EcoLur, an environmental non-governmental organization, suggests that approximately 700,000 cubic meters of forest are cut down annually in the country, said EcoLur's president, Inga Zarafyan.

In response, Hayantar’s director, Martun Matevosyan, said, “While qualitative changes to the forest have occurred, the overall amount of forested areas is the same today as in 1988.”

'Fed Up' With Corruption 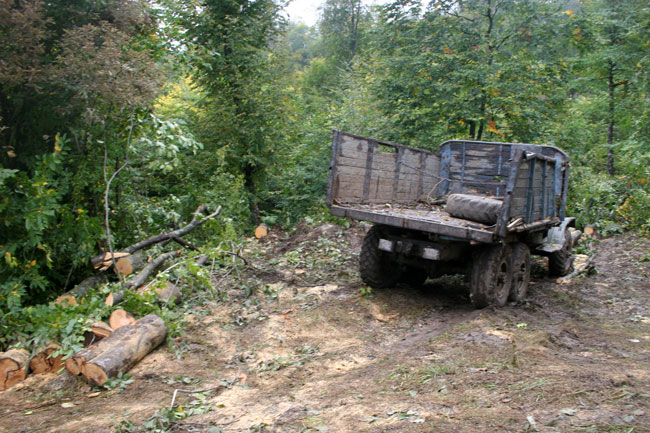 As long as the government refuses to revise and update its data about forestry areas, the lack of solid information will hinder any real opportunity for accountability in the timber business. The lack of legitimate data is also a reflection of little transparency in Armenia.

In April 2011, the Caucasus Research Resource Center (CRRC) in Yerevan presented its 2010 “Armenia Corruption: Survey of Households,” showing that over 80 percent of Armenian citizens believe that corruption is a serious problem. That is 10 percent higher than the prior year, said CRRC Director Heghine Manasyan.

According to Transparency International’s 2011 Corruption Perception Index, Armenia ranked 129th (unchanged from 2010) out of the 183 countries assessed, with a 2.6 score. The score indicates the perceived level of public sector corruption on a scale of 0 to 10, where 0 means a country is perceived as highly corrupt.

When it comes to corruption perceptions, the government also plays down the numbers. In November 2011, Georgi Kutoyan, chairman of the Anti-Corruption Strategy Monitoring Committee and an adviser to the president of the Republic of Armenia, presented a report about implementation issues with the functions of the monitoring commission. After the Anti-Corruption Council discussed the information, the official statement said, “There was a reduction in corruption risks in the above-mentioned time period as compared to 2008 and 2009.”

The Armenian public is “fed up with corruption,” he added. “This means that we have serious work to do in bringing corruption levels down and in portraying the true picture to the public.”

Transparency International’s Varuzhan Hoktanyan offered a couple of suggestions for battling corruption and corruption perceptions. “Without measures like the separation of the business and political spheres and the decrease of monopolies it’s quite unlikely that the perception will improve," Hoktanyan said. "It is even possible to cut the level of corruption without arrests, if that separation is achieved or if other steps are taken to put an end to the monopolies.”

* Edik Baghdasaryan is the founder and head of Investigative Journalists of Armenia and editor in-chief of the newspaper Hetq. A lecturer at Yerevan State University, Baghdasaryan has received a number of local and international awards. In 2010 he won the Gerd Bucerius “Free Press of Eastern Europe” Award, and in 2011 he received the 2011 Media Freedom Prize in Armenia.