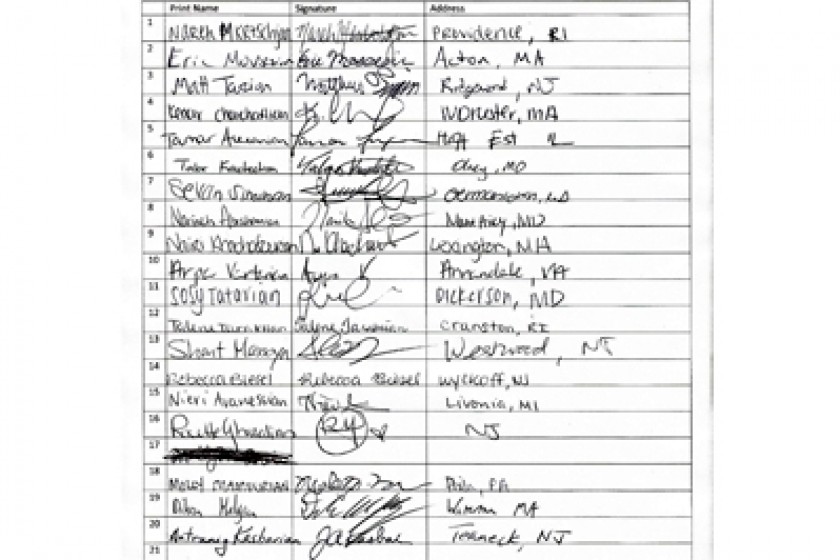 On the weekend of October 13, at an AYF Eastern Region senior seminar themed “Project Armenia”, AYF Seniors signed a letter addressed to President Serzh Sargsyan, Prime Minister Tigran Sargsyan, and the Vallex Corporation. The letter, reproduced below along with a selection of signatures, calls on the parties to cease the illegal mining operations going on in Teghout forest unless and until a fair and non-biased Environmental Impact Assessment is conducted.

As you know, the January 25, 2012 Parliamentary Assembly of the Council of Europe Declaration No. 503 found that these operations, and the manner in which they were approved by the Government of Armenia, are in violation of domestic and international laws and agreements.

The issue demands immediate attention, but cases brought in Armenian courts have been procedural bases without attention to the substance of the claims. The Environmental Impact Assessment (EIP) which purportedly enumerated and calculated the harms which would be caused by the mining is deeply flawed and information disseminated based on it is likewise false. The damage being done to Teghut is final – it cannot be undone.

The benefits of mining in Teghout in this manner have not been demonstrated by data or sound evidence to an extent that it is shown to be efficient and a good decision economically and environmentally. While the mine may create jobs, they will be temporary. The mining and taxing fees are not enough to outweigh the costs of ecological loss, deterioration of health and loss of future opportunities the land may present in the future.

The Government of Armenia has a responsibility to exercise careful foresight in the expending of Armenia’s resources. Future generations must not be deprived for the sake of temporary economic gains today.

With this letter, we formally request that a new, independent and transparent Environmental Impact Assessment be conducted in order to:

1. Comply with domestic and international laws

2. Determine and present an accurate analysis of the environmental impact of the Teghout mining operations

4. Take alternative development options to mining into consideration (such as eco-tourism) as required by Armenian law

If the mining can be justified, then the information should be presented in a transparent, accessible and well-documented manner. The conclusion should be based on independent economic, environmental and legal analysis. The public should be allowed input, and their and our voices taken into consideration.

Until a new EIP is conducted and a justified decision is made, international best practice indicates that the mining should be suspended, due to its potentially dangerous consequences.

As young Armenians who feel invested in the future of the Republic of Armenia, we are passionate about taking any opportunities we can to voice our opinions. Members of the Diaspora are involved in actions taken on behalf of Teghout in Armenia and outside the Republic.

We look forward to receiving your response to this letter within 10 business days. You may respond to our request by writing to [email protected] .