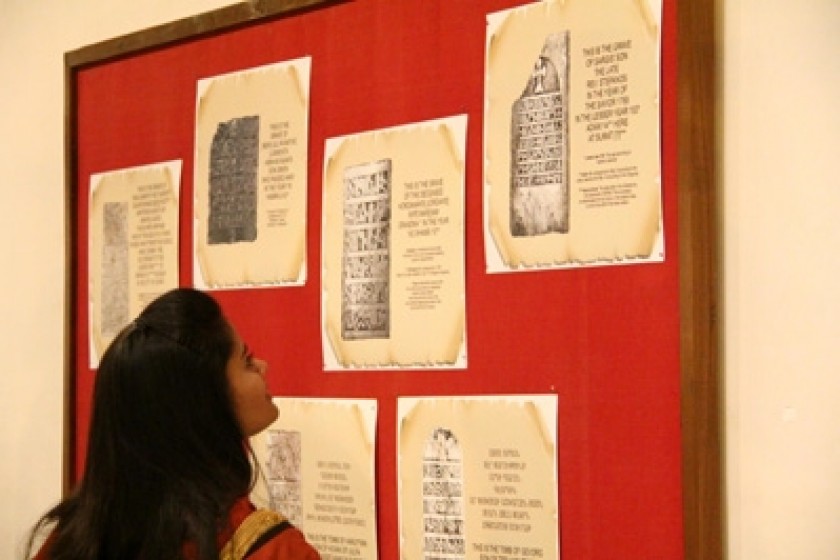 In India, as part of the UNESCO World Heritage Week 19-25 November, the Surat Science Museum holds an exhibition that spotlights the Armenian graves of the city of Surat. The exhibition has already caught the attention of the local residents who attended. The exhibition, run by the Surat Science Museum has a photo gallery of the Armenian graves with the English translations beside them.

Until recently the Armenian graves were only ever seen with their Armenian script. Had it not been for a “pure chance” moment, it is unlikely the exhibition would ever have taken place. Photographs of the graves were posted by Arpine Gyulinyan to the Indo-Armenian Friendship NGO Facebook page and were spotted by Liz Chater, a UK-based family history researcher.

Liz then contacted Arpine. Liz and Arpine started regular communications and Arpine introduced Liz to Sanjay Choksi the photographer who took the pictures. This heralded the start of a story of collaboration and co-operation spanning three continents. Liz says:

"In a way without Indo-Armenian Friendship NGO Facebook page it wouldn't have happened. Sanjay Choksi and Piyush Dalal (Arpine’s husband) took the photos, Arpine posted them to IAF Facebook page, and I happened to see them. I asked if I would be allowed to post the photographs of the graves on my website and said that I would try to get the English translations of them.

A few months passed and with the help from the fantastically knowledgeable historians Professor Sebouh Aslanian and Father Krikor Maksoudian from the USA the translations began to take shape. This truly international story of working together and co-operation would not have brought such lime-light onto the Armenian graves of Surat. We have all played a part and now the grave photographs and the transcriptions form part of the Surat Science Centre Heritage Programme this week."

Although the exhibition ends on November 25, the photographs and English translations can be permanently found on Liz Chater’s website chater-genealogy.com.

Liz Chater has been researching the Armenians in India for the last 12 years. Seven years ago, Liz decided to start an ambitious project to photograph and transcribe all the Armenian graves in India and to make that information available to other interested researchers. Following many trips to India she was able to place hundreds of pictures of the Armenian graves onto her website.

Furthermore, Liz has recently self-published a book on Armenian graves in Dhaka entitled: ‘Armenian Graves, Inscriptions and Memorials in India – DACCA 1722-1977’ in which the English translations from classical Armenian have, for the very first time been made publically available by her. She was kindly assisted with this project by Very Reverend Father Krikor Maksoudian of Arlington, Massachusetts who translated the classical Armenian script and who is also actively translating the Armenian graves at Surat for her.

The Armenian graves at Surat have never previously been fully translated into English and doing so, and bringing these translations to the internet will enable other family history researchers and historians access to what has been, up until now, ‘locked’ history.

Liz Chater’s genealogical database has over 10,000 Armenians who once lived, worked and died in Asia and it is hoped that she will be able to get this information published.

Karen Mkrtchyan 2019-01-25 04:29:03
Liz Chater continues to surprise us all with her hard work and achievements. It is always a pleasure learning about her new achievements, and an honour having her with us in IAF. We wish Liz the best in her work, and an unending success in unearthing the lost but valuable history of the Armenians in the East. To know more about Indo-Armenian Friendship (IAF), see our blog http://india-armenia.blogspot.in/ or join our facebook page @ https://www.facebook.com/groups/india.armenia/?fref=ts Long live Indo-Armenian Friendship.
Michael Stephan 2019-01-25 04:29:03
Yes liz has done alot of research that's great and I wish her the best.I wish the Armenian church takes the initiative to take care of the cemeteries in Surat/Delhi?Hyderabad they should send down professionals for the restoration of graves this is part of HISTORY and this should never be wiped away..Long Live Indian Armenians/ Mayr Hayastan. Michael Stephen Former Caretaker Armenian Church Madras India Former Asst.Manager Armenian College India.