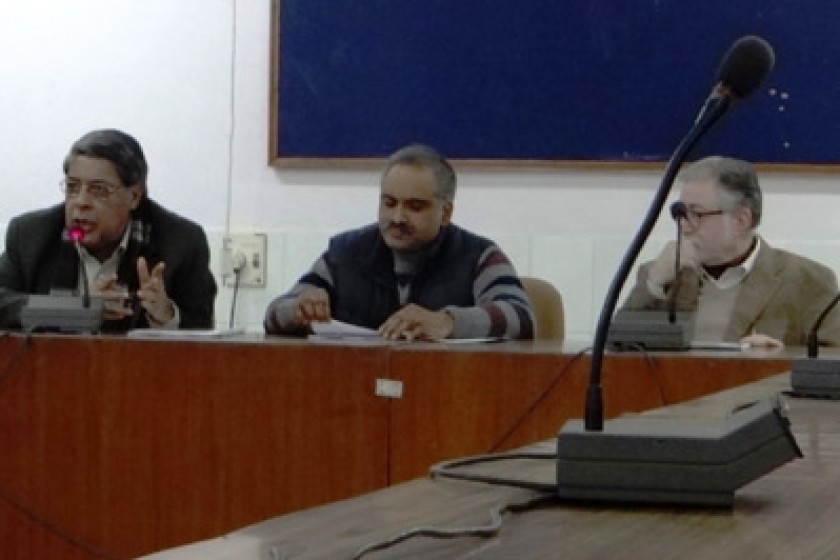 Those attending the event included Armenian students in India, Indian students who had graduated from YSMU, businessmen and people from different walks of life interested to know about Indo-Armenian ties.

Prof. Purushottam Agrawal, who recently launched his new book ,“Hindi Sarai: Astrakhan via Yerevan” spoke about his experiences in Yerevan; his penultimate destination before his journey to Astrakhan in Russia. His journey inspired him to author this book, which he describes not only as “Travelogue” but a well-researched “Thoughtlogue”.

He especially mentioned the great contribution of Armenian patriotic poet Yeghishe Charents in the cultural historicity of Armenia. “Armenian people are quite efficient, quite energetic and very helpful”, said the professor, recalling his days in Armenia. “I was aware of the importance of Armenia in world history, and also of the long standing cultural relations between Armenia and India”, continued the author, and went ahead to speak about the immense contribution the Armenians had on Indian culture and society.

Ambassador Designate Dr. T. Suresh Babu works in the Eurasian division of Ministry of External Affairs, Government of India and is in charge of CIS countries, among which Armenia is one as well. While speaking of his next assignment as Ambassador of Armenia & Georgia, he recalled how he got to know about Armenia for the first time when his father took him to Armenian Bazar in Chennai. He underlined the great goodwill existing between both countries and was happy to state that there is already a great foundation to easily take his work further.

Mrs. Lusik Tovmasyan, Consul of Armenian Embassy in India addressed the audience and spoke about the centuries old Indo-Armenian  ties. She underlined the striking similarities between people of both countries. “As most Armenians in India will agree, it is very difficult for one to part away from India after staying in this country for some time”, she said, speaking about the love Armenians have for India.

She also spoke about the long-standing Indo-Armenians ties, making a special mention about Mariam Zamani Begum, the Christian Armenian wife of Mughal Emperor Akbar. The Armenian Consul further wished the new Ambassador to Armenia immense success in his new task in Yerevan.

Renowned Warli folk artist Mrs. Babita Biswas, also present at the event, shared her memories about Armenia that she experienced during her visit for her painting exhibition jointly organized by the Ministry of Culture of Armenia and ICCR.

Indo-Armenian Friendship NGO (IAF) is a non-profit, non-partisan, non-governmental organization (NGO) committed to benchmark INDIA-ARMENIA relationships in the world-map while acting as a connecting “BRIDGE” between India and Armenia to promote people to people connection, strengthen cultural, socio-economic ties, trade engagement and also in long term developing environmental guidance through sustainable development programs for a prosperous future with great emphasis on bilateral engagement; to educate Armenians on India and Indians on Armenia. It will be acting as the Armenia Chapter for the “Society For Promotion Of Global Understanding” (SPGU).