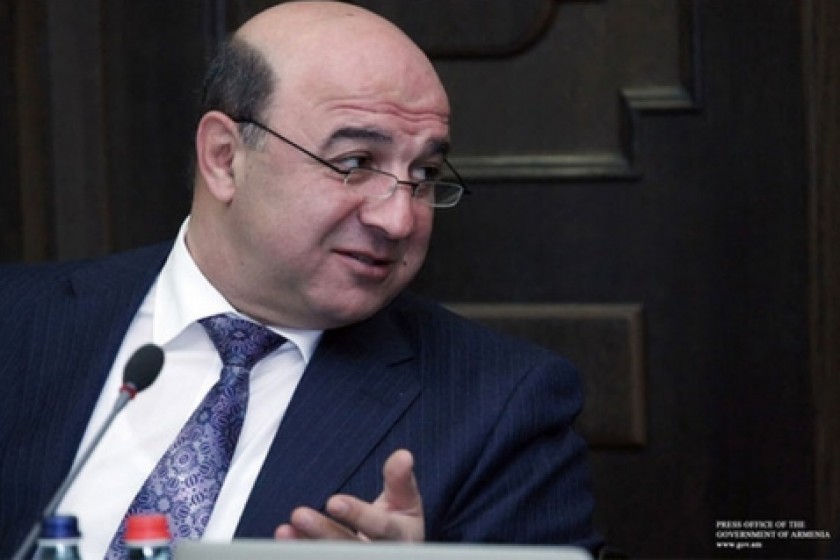 Nairit Plant CJSC in hasn’t been operating since 2010. The factory, producing chloroprene rubber, was built in 1934 and was considered a giant of its kind during the Soviet era. The market for its finished product was the and Soviet-bloc nations. In its heyday, Nairit was the 4th largest rubber operation in the world.

In the 1940s, Nairit was producing more than 7,000 tons of rubber per year. By the 1960s, output was 35,000-42,000 tons yearly. In the 1980s, this figure was more than 75,000 tons. After the fall of the , the fate of this behemoth fell into the hands of Russian and Indian owners. In 2002, RANSAT PLC became the 100% shareholder and the factory was renamed Nairit-Ransat. Later, the factory reverted to Haykap Bank (now Ararat Bank) when it could not meet a number of loan obligations it owed. In 2006 the government of passed a decision allocating 90% of Nairit’s shares to the HayGazArd state utility, with the remaining 10% going to ’s Ministry of Energy and Natural Resources. This last transaction, which we will discuss below, was critical for Nairit. The factory was mired in debt, forcing it to halt production.

With the aim of reviving the factory, the Interstate Bank allocated US $170 million in loans between 2006 and 2010. There is no state agency in noting that Nairit received such a large amount of loans. Official statements only refer to $70 million. Today, this money has disappeared, the factory doesn’t operate, workers haven’t been paid for the past ten months, and Nairit is in debt to the tune of $500 million.

How much money did Armenian and Russian government officials walk away with?

In August 2006, Rhinoville Property Limited purchased 90% of the stock in the Nairit Rubber Plant from HayGazArd for US $40 million.

The remaining 10% is owned by the Republic of Armenia; specifically the Ministry of Energy and Natural Resources.

However, Rhinoville never paid any of it's cash for the purchase. In a financial sleight of hand, Rhinoville used the factory as collateral to obtain a $70 million loan from Interstate Bank. The company handed over controlling rights over Nairit to the bank stemming from the shares.

After receiving the $70 million loan, Rhinoville purchased Nairit for only $39 million. $1 million was registered as the plant’s annual deficit.

The fate of the remaining $31 million is a mystery till today. We will cover this later.

According to the contract the Armenian government signed with Rhinoville, the latter was obliged to invest $120 million in the factory. (The contract was signed by the late Prime Minister Andranik Margaryan and Energy Minister Armen Movsisyan)

The initial $60 million was supposed to be invested by January 2009 and the plant’s overall production was to reach 2,500 tons. The other $60 million was to have been invested by January 2012. If production did not reach 2,500 tons by January 1, 2009 and the scheduled investment not made in full, then the government was authorized to take the difference of the investments in Rhinoville Property Limited shares.

We wrote to Energy Minister Armen Movsisyan, asking him to comment on whether Rhinoville had fulfilled its obligations under the contract, but have yet to receive any response. The minister also has refused to grant Hetq an interview regarding the matter.

Armenian government officials seem more concerned with concealing any traces about their failures to re-launch Nairit rather to get it working again. They have even removed traces of the government’s August 18 Decision N1131-A to sell the factory from the government’s official website archive.

Thus, we are left with no official information on the transaction despite scores of offshore companies, corporate lawyers and the large sums of money involved.

Hovhannes Hakhinyan, the current director of Nairit, also refused an interview. So did former director Vahan Melkonyan, arguing that a prior Hetq article contained less than 10% fact. Melkonyan said he didn’t trust us as a credible news outlet.

“When the RA authorities deem it proper that our international partners (i.e. Interstate Bank, of which he is now a representative in Armenia – author) officially refute all this, then we will refute it,” Vahan Melkonyan told Hetq.

“There are no officials from Armenia or even citizens of Armenia in Rhinoville’s list of shareholders, and there cannot be,” Minister Movsisyan declared. He added that three European companies founded Rhinoville, but that they had changed over time. “I can’t tell you their names right now,” Movsisyan said to avoid answering.

In reality, Armen Movsisyan knows full well who the founders and shareholders of Rhinoville are. He was privy to the entire transaction and knew the players involved. Yes, he was correct to say that no Armenian officials hold shares in Rhinoville. But he was wrong about his statements regarding the three European companies. We’ll now show you why. In any event, the minister said what he did to confuse the reporters.

Rhinoville Property Limited was registered on December 6, 2002. The last know registration address is 60 Cannon Street, London, EC4N 6NP. The company conducted no trade activity until August 2006; that’s to say until it purchased Nairit.

Isn’t it more than surprising that the government of Armenia entrusted the fate of Nairit to this company with no commercial experience in rubber production? The question arises – what possible profit could Minister Movsisyan expect to receive in return for selling Nairit to such an unknown and untested off-shore company?

The founder and sole shareholder of Rhinoville Property Limited was one IMEX Executive Ltd., a company registered in the British Virgin Islands. However, in the summer of 2006 there was a change in top management and shareholders. By the end of the year, two other off-shore companies took over the shares of Rhinoville. They were Drayton Finance Ltd (810 shares) and Latheron Properties Ltd (190 shares).

Drayton Finance Limited was founded by IMEX Executive; the same founder of Rhinoville. In Rhinoville’s 2006 annual report, which we obtained through British official sources, there is an interesting line stating that the parent company of Rhinoville is Drayton Finance Ltd., and the ultimate controlling party was one Sergey Kulikov by virtue of beneficial interest  in the issued share capital of the company.  At the time of the sale of Nairit, Sergey Kulikov was serving as the Deputy Director of Interstate Bank. The Russian press, when referring to Kulikov, write that he used his numerous offshore companies to receive loans from interstate Bank for use for his companies operating in Russia. Later, those companies were declared bankrupt and were taken over by Interstate Bank. Afterwards, the Russian General Prosecutor filed criminal charges against Kulikov and he no longer works for Interstate Bank. (We will return to Kulikov and his family in future article about Nairit)

In the financial report of financial year 2007, it states that as of November 30, 2008 the ultimate controlling party became Mr Eric Narsisyan on the transfer of Mr S. Kulikov's beneficial interest in the issued share capital of Drayton Finance Limited.French-Armenian Eric Narsisyan  has served as one of the directors of Rhinoville Properties for the past five years, assuming the position after the death of his father Andre Narsisyan.

Latheron Properties Limited was also founded by IMEX Executive, but in November 2008 Nairit LCC (ZAO Nairit) became the shareholder. According to Nairit Plant Public relations and Press Director Anoush Haroutyunyan, there never was nor is there now a Nairit LLC. However, Russian sources list a Nairit LLC (ЗАО Наирит), and the name of Varduhie Matevosyan is listed as coordinator. The company states it is mainly active in commodity trading including sales and supplies to Nairit CJSC in Armenia. Matevosyan told Hetq that Nairit LLC and Nairit Factory are one and the same, disclaiming any involvement with any other Nairit LLC.

According to documents in our possession, as of January 1, 2012, Drayton Finance and Latheron Properties are the shareholders of Rhinoville Property Ltd. In turn, Nairit Plant CJSC is the sole owner of both Drayton and Latheron.

In a weird about-face, it turns out that Nairit plant CJSC is the 90% shareholder of Rhinoville and the party responsible for its loan contractual obligations.

P.S. Edik Baghdasaryan also contributed in the preparation of this article.