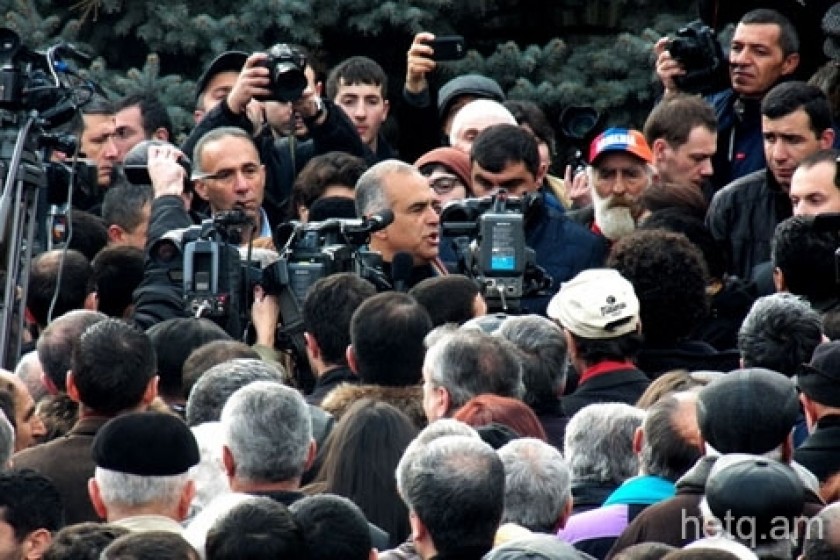 The following statement has been released by the Armenian Bar Association:

On February 18, 2013, in an unprecedented show of willpower the people of Armenia elected Raffi Hovannisian as their next President.

They voted against the odds, against threats of persecution and against temptation. The present government of Armenia now denies Raffi Hovannisian’s victory. For years the people of Armenia have been criticized by many for failing to stand up for their own rights.

Now they have stood up and voted their will. Now it is time for the Diaspora to act its role.

Tomorrow President-elect Raffi Hovannisian will hold a rally at 5 p.m. (5 a.m. PST February 20, 2013) at the Republic Square in Armenia where he will announce his plan to enforce the people’s will. Join him and stand ready to do whatever becomes necessary to ensure by legal means that the people’s vote counts.

We are on the verge of changing Armenia’s future. The people’s vote must govern. This transcends all boundaries including political affiliations. We must unite. We must not only unite with each other but also force those who resist the truth to embrace it and to unite with us. The people of Armenia have suffered far too long. Empowering them will empower Armenia, empower democracy and empower us all.

We urge President Obama to join us and to reaffirm and declare that the United States government is unbending when it comes to civil rights and liberties across the globe.

We urge all members of Diaspora political parties, associations, communities, schools and charities to join President-elect Raffi Hovannisian in the battle to enforce the people’s will.

We often chant “ignoring the Armenian Genocide was the same as commending it.” Now is the time for each of us to determine whether we oppose or commend the utter disregard of the Armenian people’s will by the present government of Armenia.

We must ask ourselves whether we choose to stand up for civil rights and liberties in Armenia or whether we choose to stand by in silence. Every citizen of the free United States of America must join this call to action for it parallels the essence of our ability to exercise our free will. The people of Armenia too have a right to exercise that free will. They have. Now we must assure that their will gets accounted for.