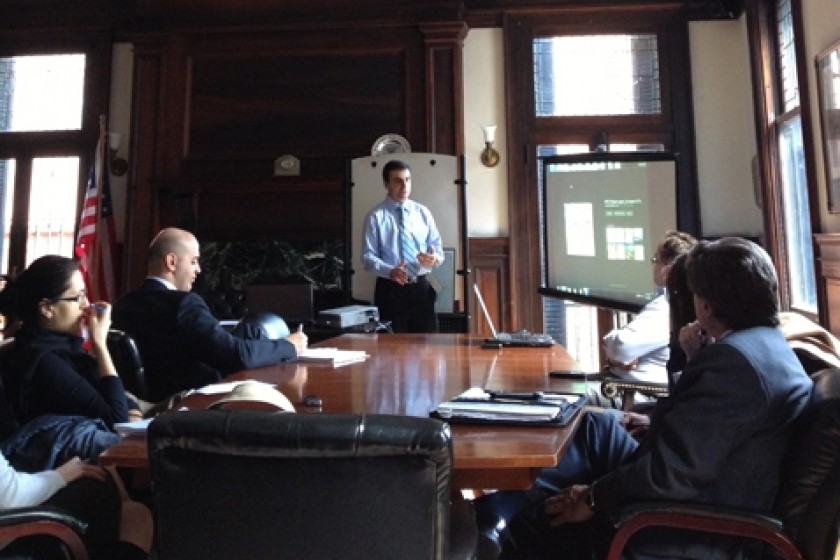 On March 20, Vilen Khlgatyan, Vice-Chair of the Political Developments Research Center spoke at the Institute of World Politics (IWP) in Washington, D.C. on the "Petro-politics of Azerbaijan."

The event was attended by diplomats, political analysts and representatives of the academic community.

During the discussion Khlgatyan presented the oil and natural gas projects in Azerbaijan, the internal politics of the country and its foreign policy. The Azerbaijani economy is heavily dependent on the energy sector.

“All indicators show that the regime in Baku has made no serious efforts to change and diversify the economy, which means that Azerbaijan is likely to experience the effects of ‘Dutch Disease’ and a failing economy should shale gas become more readily available on the global market,” he said.

The Azerbaijani strategy of using its energy resources as a foreign policy tool started under Haydar Aliyev, when he realized that inviting Western energy firms would serve the dual goals of keeping Russia at bay and birthing an incentive for the West, chiefly the US and UK, to take an interest in Azerbaijan.  His son, the current dictator of Azerbaijan, followed suit and added another layer to the policy of ‘caviar diplomacy’ by pouring money into the State Oil Fund of Azerbaijan (SOFAZ), and using those funds to carry out an aggressive public diplomacy and information war campaign, mainly targeted at Armenia and the Armenian Diaspora. Examples mentioned by Khlgatyan included the 2012 Eurovision Song Contest, the Haydar Aliyev statue in Mexico City and the alleged bribe paid to the Hungarian government to extradite axe-murderer Ramil Safarov.

Khlgatyan also spoke about the authoritarian nature of Azerbaijani politics and the de facto one-party rule under the New Azerbaijan Party.  Every election Azerbaijan has held in the last decade has been widely criticized as undemocratic, corrupt and illegitimate. This has not stopped Ilham Aliyev from making further efforts to increase his power, such as the 2009 referendum to abolish presidential term limits. Moreover, allegations surfaced in recent years that Aliyev’s son owns mansions in the United Arab Emirates, and the younger of his two daughters owns millions in shares of the main mobile phone operator in Azerbaijan. Aliyev has established a kleptocracy that consistently ranks among the most corrupt states in the world according to Transparency International.

Azerbaijan’s foreign policy regarding its neighbors was discussed as well, specifically its tense ties with Iran, hostility toward Armenia, and strategic relations with Turkey. The main aim of Azerbaijan has been to isolate Armenia from all regional energy projects, and use its energy to keep Russia at bay and attract Western political support and economic investment.

During the question and answer session Khlgatyan remarked that under Aliyev's rule freedom of expression and thought have been curtailed. Fakhraddin Ismayilov, a diplomat from the Azerbaijani embassy, went on a tirade and criticized the Institute of World Politics and forum moderator Marek Jan Chodakiewicz for allowing an ethnic Armenian to speak on Azerbaijan. He further alleged that the presentation was lacking in facts and that because no Azerbaijani had been contacted to provide information the presentation was biased. Yet, he offered no examples of how the presentation was unfactual. The Azerbaijani embassy representative's diatribe against IWP for allowing an Armenian-American to speak on Azerbaijan highlighted this fact better than anything Khlgatyan could have said. Ad hominem attacks against Khlgatyan would have continued had Chodakiewicz not put an end to Ismayilov's rant, which caused the Azerbaijani diplomat to sit sourly in his chair for the remainder of the session.