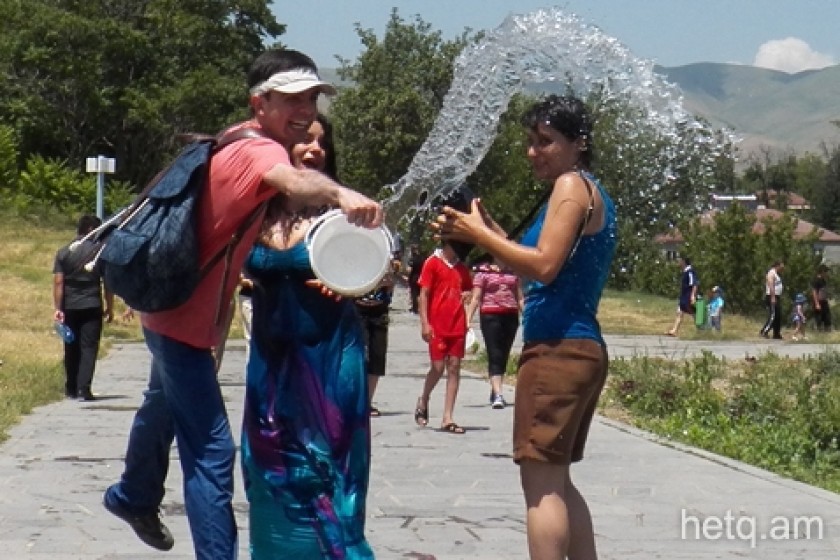 Referred to as Paytzarakerputyun, the Feast of the Transfiguration is one of the five principal feasts of the Armenian Church, so named because of Christ's luminous appearance.  In Armenia it is also known as Vardavar (the Festival of Roses) after the old pagan feast, which it replaced.

The pagan feast Vardavar (the Festival of Roses) marked the harvest each year and was traditionally associated with the goddess Astghik—the pagan Armenian deity of water, love, and fertility. To replicate Astghik’s bathing, people would sprinkle each other with rose water and hold a special festival of roses during this joyful feast.

With equal delight, Armenians rejoiced over agricultural abundance during Vardavar.  It either preceded or coincided with the feast of the harvest, which was the Armenian New Year (Navasart-Amanor). It was most likely held between August 1 and 6, each year.

Different regions in Armenia celebrated the harvest with different traditions. For instance, in the district of Koghtn it was customary to hold a ritual during this festival involving green wheat that had previously budded. In other regions, special rituals were directly connected with animal husbandry. The Armenian Meliks marked the day with feasts held in the fields and rituals dedicated to fertility-such as bringing fruits as gifts to future brides and grooms, throwing fruits on their heads, or sending them apples. Throughout much of Armenia, families enjoyed delicious harisa as part of the feast.

Today in Armenia, people still maintain the tradition of splashing each other with water on Vardavar. Children and young adults are usually seen ambushing passerby with buckets of cold water—a welcome surprise on hot summer days.

ed 2019-01-25 08:29:26
I respect our Armenian Church much. BUT- Armenian Church should not act as if Armenian nation is not older than the Armenian Church! Vardavar is and will remain a pagan feast. It would be nice if Armenian church start accepting and respecting our Pagan heritage and stop manipulating our pre christian celebrations and holidays as well other traditions!! Even one visiting Erebuni museum in Yerevan sees almost nothing (almost empty, but a lot of employes) and what else , there is a big Kachkahr (stone cross) too-