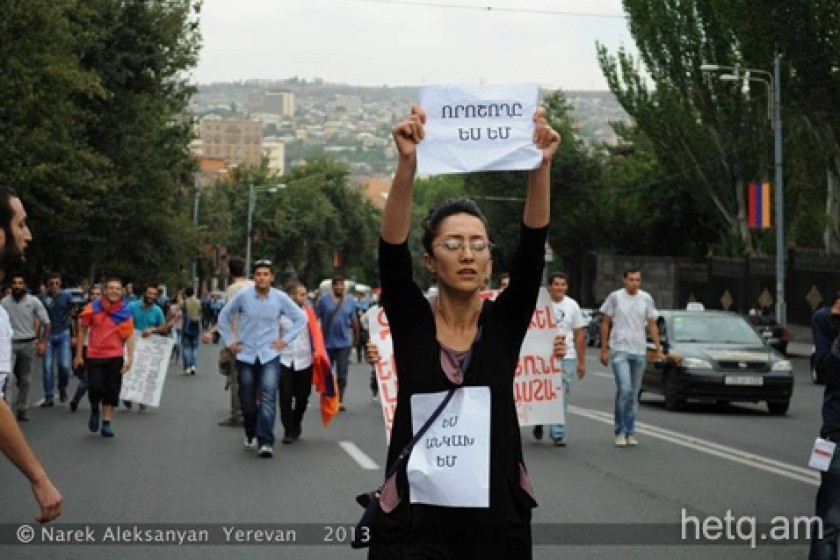 "The Development of New Cultures in Civic Movements": Activist Ruzanna Grigoryan Sounds Off

If political activism may seem boring, hard to understand and, especially uninteresting to some people, this isn't the case for Ruzanna Grigoryan, who gained notoriety in the Internet during the “Mockery as a method for civic struggle” action.

During one of the actions against the mayor's office, she appeared with a toy gun and wearing clown accessories, emphasizing the absurdity of the authorities and the police force defending them.

Poet and publicist Zaruhi Hovhannisyan says it's typical for Ruzanna – transforming to a humorous situation after actions deemed too serious.

"She adds positive energy into the struggle with it," says Hovannisyan. "In every action Ruzik sees that which is in the parallel domain and is able to change the life with culture”.

The first fervent wave of civic activism was in 2010 to preserve the summer hall of Moscow Cinema, when the Mother See wanted to demolish it to build the St. Poghos-Petros Church on the site. Many groups and movements were formed afterwards, most notably the Mashtots Park and Hundred's movements, which too were victorious.

Ruzanna finds civic movements very important for the development of Armenia, because not only they formulate and solve problems in the system, they also create new cultures, e. g. the culture of young people's independent habitation.

“Many girls, in the course of civic movements, started to separate from their parents and organizing their lives independently”,- she says.

Ruzanna, with fellow activist Lena Nazaryan, has been renting an apartment for some months already, and is leading an independent life. In the new apartment, they have just moved in their belongings, which are still scattered, and a small kitten is running around. Parallel to an active social life, they also manage to take care of the animal they found in the yard.

Ruzanna also says that in civic movements serious changes are taking place in the man-woman relationship, because they allow an individual to stand from the position of a free-thinking citizen - which is out of the accepted cultural norms.

“There is real equality among men and women here," she comments. "It's not that a couple of smart strong leading guys are deciding and subordinates are following”.

“Here” is not as abstract as it might seem. “Here” was, for example, the civic platform formed in Mashtots Park, which was a place for realizing free speech. It was a time, when the city took part in city life: cultural figures, artists, people, who had something to say gathered during the week and organized discussions.

At the same time, she stresses not the victory itself but the process, moreover, the long-term process, where there is vision and the road to reaching it becomes a way of life.

“As a result, you start being creative in social life," she says, adding, "It's a ceaseless action, which is followed by reflection, action and reflection. They run parallel and complement each other. You think, you act, you talk to different people, from outside, from inside, like you, with a world view different from yours. This is a ceaseless and continuous process”.

Ruzanna is making breakfast, parallelly presenting her perception of the idea of a citizen. She stresses that some part of the problems in our reality are connected to the patriarchal perceptions present in our society: “52 percent of the population is female, the 48 percent – male, but organization of our lives and the most important decisions are taken by men, because that's how the system works”.

Ruzanna wants to live in a country where everyone can think in a different way, but everyone is equal in rights and freedoms and respect those freedoms.

“That's the guarantee of a happy society,- she comments,- in the opposite case some group will become privileged and start oppressing other groups: the happiness of one group will be at the expense of others”.

Outside civic movements, Ruzanna is a researcher in the Public Health Department of the American University: she's a doctor by profession, received education first in the Medical, then American universities. She's working in a project evaluating the impacts of pollution with heavy metals on human health.

Ruzanna likes travelling and climbing high mountains. “But my biggest passion is the passion for cognition,- she says,- knowing yourself and the world surrounding you. And in this respect civic activism is very useful”.

Her activism has started after the fight for the Trchkan Waterfall, when she understood, that a group of people, no matter how small, can gather together and solve a problem: “it greatly motivates”.

Before we start our breakfast, the kitten starts meowing and demanding to be fed, and we move back to the kitchen. There's chicken specially cooked for it, which Ruzanna divides in threads, continuing to radiate enthusiastic thoughts that if there's a definition and approach sincere to the point of being personal, the problem will be solved.

“If there are at least 5 people who consider a problem personal and consistently stand for it to the end, the problem will be solved”,- she says, putting the meat in the feeder, which is quickly depleted.

Cultural anthropologist Aghasi Tadevosyan says that Ruzanna, as a matter of fact, is one of the individuals forming new practices with her actions, because she realizes her activism as a way of life and thought, which is directed from inside to outside – from personal to social.

“Activism arising from inside is very important,- he comments,- this is a very substantial, surprising and pleasant human property, which is typical of her and I think that's where her surprising feeling of freedom and strength of spirit comes and passes to the people surrounding her”.

The police has carried Ruzanna off using brute force several times: she has bruises on her elbows, but that can't make her turn back from the way she's heading.

We are continuing to discuss, how changes can be reached and which is the right option. In my companion's opinion, the best way to change is not destroying, which will lead to defeat, because that's the field where you're fighting with someone who's stronger, but creating a new culture, independent of the authorities and with a different symbolic system.

“As a matter of fact, you're creating a new thing, and the new thing gives the old one two options: renew itself to understand your symbolic language to communicate with you or automatically break down and fail, being replaced by the new”,- she comments.

Concerning the idea of the traditional Armenian hearth and home, she isn't against it at all, it's only that she thinks every family should make their own mind which way they want to be.

“It's just that people should be able to choose, not just be obligated the traditional model,- she comments,- there can be as many models, as many families there are in Armenia. Some women may choose that model, but it doesn't mean the rest of the 1.5 millions of women should live that way”.