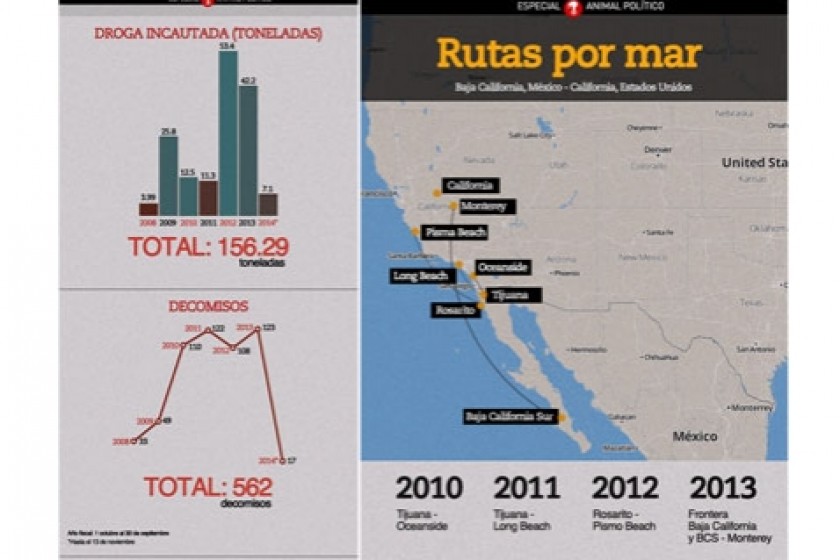 Maritime drug trafficking along the Pacific coast from Mexico to the United States has risen steeply in recent years as overland smuggling has become more difficult, a pattern little reported amid fanfare over the reemergence of the Caribbean drug route.

According to Mexican border agent Gerardo Gutierrez, who was consulted by Animal Politico, drug trafficking along the Pacific coast has risen 73 percent in the past four years, at the same time as overland trafficking has fallen -- with marijuana and cocaine shipments by land dropping 35 percent and 66 percent since 2011 respectively, according to Gutierrez. This pattern has been marked by a significant increase in both the size and frequency of drug seizures at sea (click on Animal Political chart to enlarge).

As well as increasing the volume of drugs moving by sea along the Pacific coast, the official said traffickers have extended the routes they are using, so that where once drugs hopped between Tijuana and San Diego, they now cover a stretch of coastline extending from Baja California Sur almost as far as San Francisco (click on Animal Politico's map below to enlarge). To transport drugs, traffickers are known to use go-fast boats, surfboards and even jet skis.

Gutierrez also highlighted a rise in the number of people attempting to cross between Mexico and the United States by sea, with 616 captured in 2013 -- significantly lower than the 867 captured in 2010, but almost three times the total of 230 captured in 2008. However, in compiling the statistics, no differentiation was made between people carrying drugs and common migrants -- although people illegally crossing the border can often be both.

Recent reports about the shift in drug trafficking routes tend to have concentrated on the Caribbean, with trafficking through the region reported in October to have doubled during 2013; a pattern predicted by State Department official William Brownfield earlier in the year.

The reason cited for the rise in the use of the Caribbean is the success of law enforcement efforts against overland trafficking. This jump in drug smuggling along the Pacific coast is likely another, but much less reported, example of the so-call "balloon effect" -- whereby cutting production or a supply line in one location merely leads to production or trafficking to spring up in another.

By Charles Parkinson, used with the permission of InSight Crime