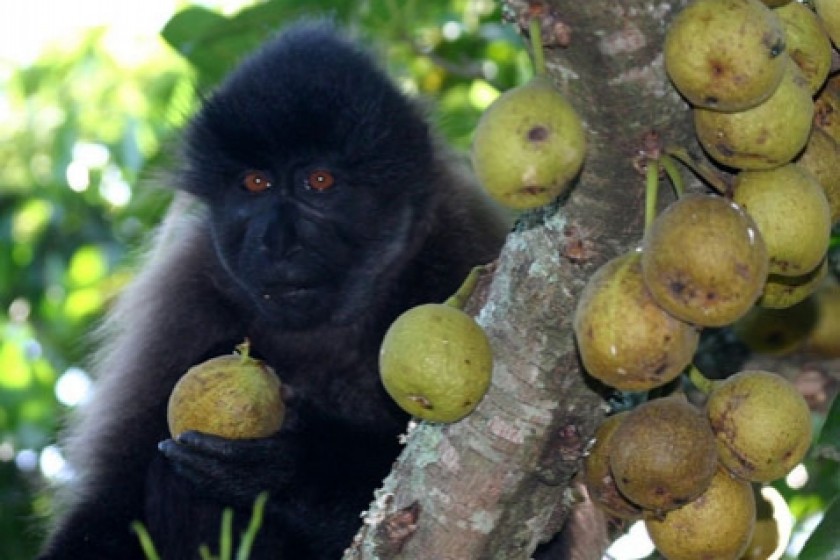 Dubious Documents: How Endangered Animals Enter Armenia under the Nose of the Ministry

According to a list provided Hetq by the Ministry of Nature Protection, only one animal included in the Red Book of endangered animal species has imported into Armenia within the past year - a jaguar (Pantera onca). The animal is said to have come from Georgia.

Hetq has obtained CITES permits by which 30 monkeys, listed in the second addendum of the Convention have been imported into Armenia from the Democratic Republic of the Congo (DRC): 10 mangabeys, 10 talapoins, and 10 agile mangabeys.

According to Article 4, Point 3 of the Convention: “A Scientific Authority in each Party shall monitor both the export permits granted by that State for specimens of species included in Appendix II and the actual exports of such specimens.”

In essence then, these animals entered Armenia by a circumvention of the Convention’s stipulations. The appropriate coordinating body in Armenia, tasked with monitoring the flow of such animals, appears incapable of doing its job.

The importer of the 30 monkeys is the same Zoo Fauna Art company that organized the importation of bonobo monkeys into Armenia. After Hetq broke the story last November, the police slapped company owner Artur Khachatryan with criminal contraband charges. The pre-trial examination is on-going.

Now let us provide a few details about the “legality” about the above-mentioned permits.

In the bottom left-hand corner of the document pictured below (which Hetq obtained from the DRC), there is no date as to when the permit was issued. This is obligatory. 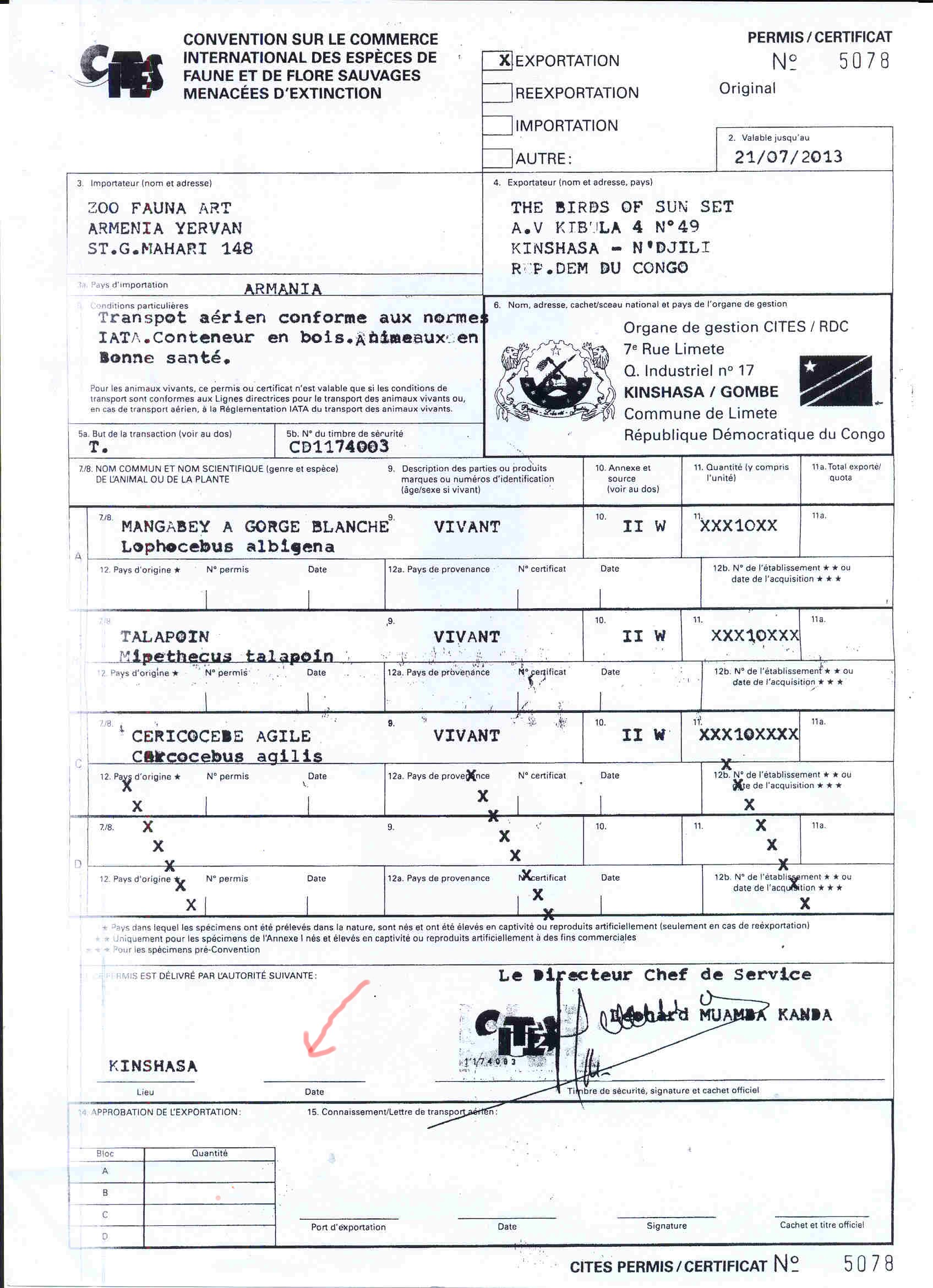 In an attempt to certify whether the Convention’s coordinating body in the DRC actually issued the permit, Hetq contacted Leonard Muamba Kanda, whose name appears as CITES Chef de Service in Kinshasa on the permit.

“I believe that to date no mangabey type animals have been officially exported to Armenia,” was Kanda’s initial response to Hetq.

In our second correspondence to Kanda, we enclosed a copy of the permit for the monkeys, and asked if the signature appearing therein was his.

“The signature on the document isn’t dated. Please wait until Thursday when I return to Kinshasa. I will look into the matter and inform you,” was Kanda’s response.

So far this year, 36 monkeys belonging to three species, have been imported into Armenia. The permit is pictured below. What is curious, however, is that the duration date of the permit (circled top right) is June 30, 2013, whereas the date of the permit’s issuance (bottom left) is December 2013. 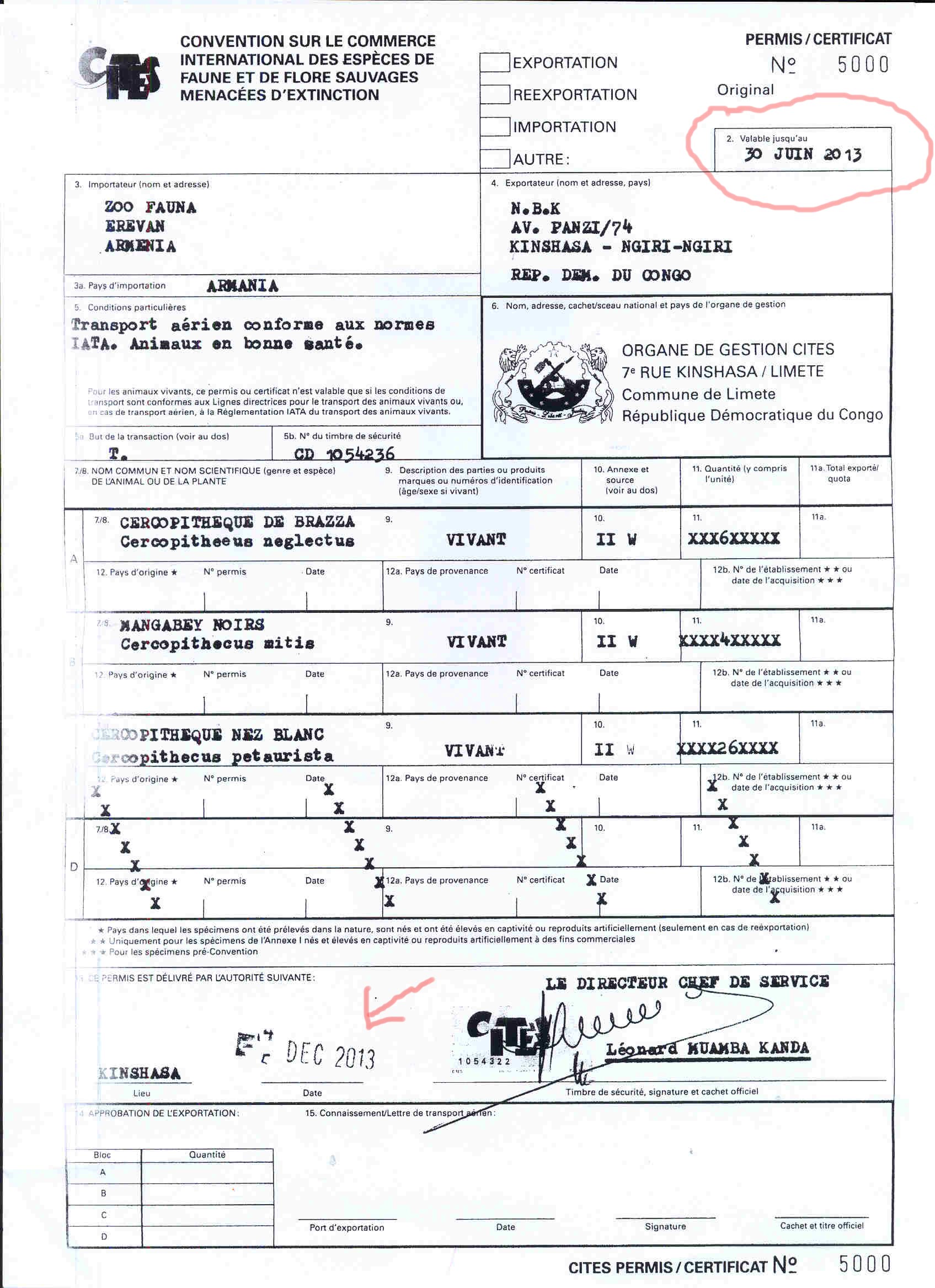 Evidently, the dates make no sense. Why would a permit be issued in December when the permit’s duration had already expired?

These are just two examples of dubious permits by which endangered animals are finding their way to Armenia.

Perhaps the relevant law enforcement agencies in Armenia will be able to uncover how many animals are being imported in such a fashion.

After Hetq first broke the story of Armenia serving as a conduit for the illegal animal trade, we have received numerous letters and comments from environmental organizations working in Africa and internationally, as well as from law enforcement agencies.

Goug Cress, Programme Coordinator of the United Nations’ GRASP (Great Apes Survival Partnership) even wrote to Armenia’s Prosecutor General, demanding information about the bonobos and chimps now on display at Jambo Exotic Park located in Dzoragbyur, a town in Kotayk Province. Cress also asked that the prosecutor general’s office follow up on the mater.

Armenia’s Prosecutor general has since written to Hetq, saying that they have received the GRASP letter and that a relevant body in Armenia is investigating the matter.

Meanwhile, the Ministry of Nature Protection, the body tasked with monitoring such trafficking in Armenia (a signatory to the CITES Convention), claims that no bonobos have entered Armenia.