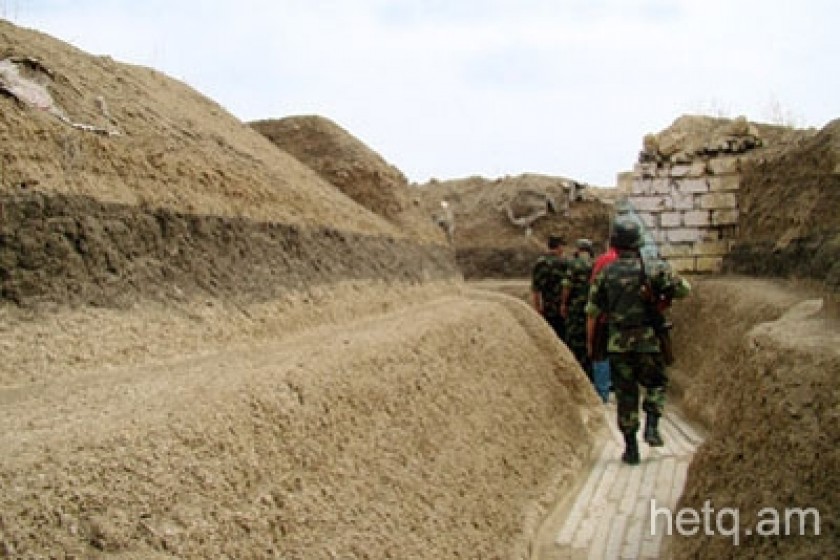 Two “Vilis” vehicles of the Artsakh Defense Forces cut through a dusty field and stopped near the front line in the village of Levonarkh in the Martakert district. This was the same outpost that the Azeris overran and held for eight hours some sixteen months ago.

The “Vilis” passengers were two lieutenant-colonels. Accompanied by battalion commander Artur Petrosyan, who supervises the military patrols in the area, they made their way through the trenches towards the contact line. As they were advancing, the cell phone of regimental commander Karen Aroustamyan rang.

The commander didn’t say a word to the person on the other end of the line. After hanging up, he ordered a call-up of all the sharpshooters and a beefing up of the monitoring. He had learnt that the enemy was calling in some heavy weaponry to the line.

Those in the front line patrol didn’t appear phased by this news; even the way they went about their daily routine. Lieutenant-Colonel Aroustamyan would ask them how they felt and talked about the patrol duties. There was nothing out of the ordinary except for the fact that a burst of enemy fire, now commonplace, had pierced the night silence.

The commander had a taut bearing about him. He’s tall and square-shouldered.   His apparently kind countenance hides a streak of roughness beneath. He speaks in a curt manner that is peppered with a tone of authority.

The taciturn officer had nothing to say about the events of sixteen months ago at this outpost. He was in charge at the time. In the wee hours on that day, March 3, 2008, when a state of emergency was in place in Yerevan, a well-armed special Azeri detachment struck. After the Armenian troops responded the Azeri fled pell-mell; leaving their dead behind.

Deputy Division Commander N. Mkrtchyan explains that, “According to our investigation, on March 3, the formation of their motorized artillery brigade. It seems that the brigade commander wanted to present a gift to his superiors and sent his “select” detachment to capture our position.”

The position in question is on a flat piece of land but the Artsakh forces have artificially elevated it to a superior position in face of the enemy. Only seventy meters separates the trenches of the opposing forces. A cement water canal, left over from the Soviet period connects them. Last year the enemy special unit crawled along the canal unnoticed to the Armenian position.

Battalion commander Artur Petrosyan recounts, “It was about 11:30 p.m. and I was traveling by car to the command post. There was a heavy fog and the wind was blowing furiously. The care was veering on the road. Then I got a call – Sir, the enemy has opened fire. I thought that maybe the enemy was taking advantage of the confused situation in Armenia and playing some tricks. I thought it might not be serious. Then a second call came – the enemy has infiltrated our trenches. To be honest I didn’t want to believe the news. I felt sort of ashamed. I consulted with brigade command and took off to the position with my deputies.”

At the command of A. Petrosyan, the seven Artsakh soldier squad at the position, under the command of the squad sergeant, pulled back to the second trench and took up defensive positions.

The trench pass connecting the first and second line of trenches is still strewn with the remnants of sand bags. Upon capturing the first trench, the enemy used the bags to close off the pass and enter into a gun battle with our 19-20 year-old seven soldiers. The enemy used heavy weapons fire from their rear position. A bit later, a few officers led by Lieutenant-Colonel Petrosyan arrived on the scene. As a result, during the first few minutes two enemy soldiers had been killed.

“Soon afterwards, the military unit commander arrived with support troops. After assessing the situation he gave orders that the enemy be destroyed right in the trenches,” recounts A. Petrosyan. “The commander and his deputy were lobbing some well targeted grenades. We mostly used grenades while the enemy was using heavier stuff, grenade launchers, etc. By 3:40 a.m. we received Lieutenant-Colonel Aroustamyan’s order to enter the trench and retake the position.”

Our forces carried out the directive in fine fashion. In a matter of a few hours, the enemy began to fall back and suffered heavy causalities; more than 30 wounded and 11 dead, including a senior officer.

Azeri’s flee; leaving their dead behind

“If they were normal people they wouldn’t have left their dead behind. They even left the dead body of their commander, a captain, behind,” says Petrosyan.

Two of our officers were wounded in the battle. One accidentally stepped on a mine and the other was hit in the hand by enemy fire. Artur Petrosyan notes that even though our conscripts didn’t allow the enemy to advance to the secondary line, it was difficult to maintain order with some of them.

‘This military operation once again showed that the mental and psychological state of our armed forces is at a high level and our heightened military preparedness allows us to deal with any unforeseen developments,” states Deputy Division Commander N. Mkrtchyan. To prove his point he refers to anther brilliant operation that certifies our continued superiority on the battlefield.

In June of last year, Armenian troop detachments in the northern sector, along the Omar mountain chain, pushed some eleven kilometers forward towards the enemy who gave up several positions. As a result, our military footholds that were located at elevations of 2,000 meters were quickly transferred to superior sites at elevations of 3,400-3,600 meters.

During a briefing with reporters, NKR Minister of Defense Lieutenant-General Movses Hakobyan stated, “The objective of this operation was to prove to the enemy that what they tried back on March 3-4, 2008, will never work. We, on the other hand, can accomplish the same if the need arises.”