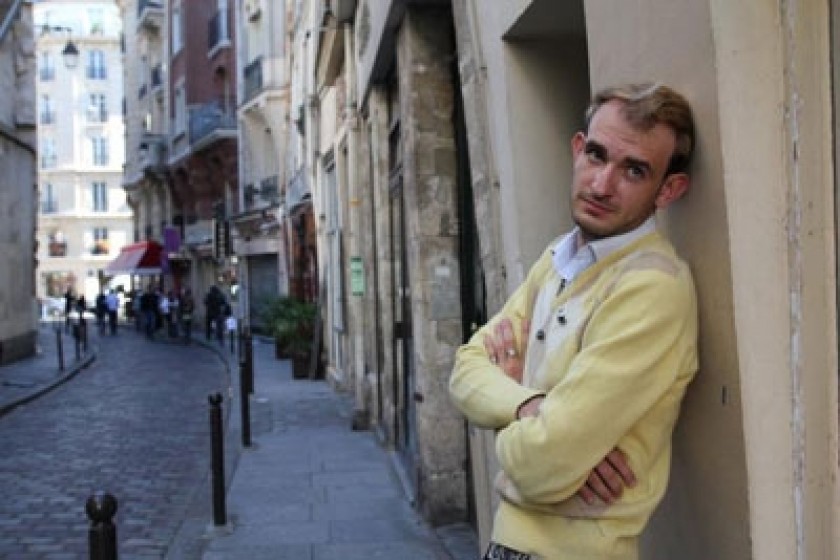 The composer being reached to a creative orgazm, after is told–it wasn’t.

To reach to the foot of the mountain Ara I went by bus ; there were mostly women and men over 50, they were unique. The man over 60, sitting in front of me with grey hair and a beard, was reading a book,the men sitting behind were discussing the parlament life and the grandmother with big pearl earings and made hair was insisting that it was already late to correct something.

I was hurrying to meet the composer, conductor Alexander Iradyan.

He was often absent being in Paris, Venice…Suddenly I was informed that Alexander returned from Paris-Venice-London trip a week ago; he was in Yerevan.

Later when I told him about my wish to have a talk with him, he invited me to his small apartment near the foot of the mountain Ara.

Here I am…. Alexander is listening to Shestokovitch’s N 5 symphony.

You know, Anush, the tragedy is described in such a right way ,you hear and you understand that still you can change everything, that there is a bright point going through that darkness.

Self tragedy which is human.

We are already having a coffee sitting on the warm stones in front of the door and Alexander through the fingers of a pianist is uncoding the music , is living with it.

What kind of field is made in Armenia for creators like you?

It is a paradox.For creating in Armenia you can find everything and at the same time nothing.There is a muse, inspiration, perception, still, people, finance and nothing when you want to represent the same people and perception to the already written music. This means here you can come to the creative orgazm but after you are told that the thing by which you are going to represent everything- do not exist.

Alexander with the help and big efforts of friends and relatives,represented it in the contest after Aram Khachatryan and became the winner of the contest.

Khachatryan’s contest was the consequence of that same paradox. My expectations were much. It is the most honourable contest in Armenia,with a serious jury stuff;there are represented amazing musicians from different parts of the world.But none of my expactations came true.I thought after the victory it would be easier for me to realize all those things that I want,and those were wonderful projects. But in vain… 3 monts passed and I’m still in the same condition.” The symphony of 10 automobiles” is one of those projects. But as I was told by one of the Armenian producers ;”You want to open the doors that do not exist” but I still want to open those invisible doors.

In this case, does it worth to stay and to compose when there are no doors?

The process of creation has no importance with time and place. Even cities can not inspire me that much than the situation that I’m living .It is far from a simple human imagination because it is invisable. Every year I’m changing something. Because I can’t stay in a same place were people did not feel the real tragedy and could only wear masks. Though sometimes even that gives you inner perception.

In the end ,your music is created for that same society.

When I was composing “The Remonstrance”(against violence) 3 years ago,I was living a person’s tragedy inside myself.And right from here the music begins to flow, when I shout and begin to flow out .

Each particle of society has its complain,pain and sees the music through its prism.

What does make you shout and flow out?

I don’t want to speak about it. Everything is said in my music. I’m just a pipe. My Alex lives easily, is more well-balanced, because the music is competely out of balance. In my coming projects there are all those emotions,feelings that will involve everyone to moistorize with something. I don’t say that it will be a revolution in the Armenian musical thinking but it is a new step to move forward.Europe is going crazy about that kind of projects. But why should not Armenia have it cause here we do have amazing composers .

Because as you said “it has nothing, it does nothing”.

You will go and come back,right?

Thus, will you go?

Certainly! I’ll go and will be back as Alexander Iradyan.You know Armenia loves names. I’ll be back in that way.

But when you are back it will be the same. Will they understand you? Your music?

I’ll come back and start spreading music not on the ruins but I’ll try to restore them partly and constantly as far as I’m breathing,walking….I mean as long as I’m composing a music.