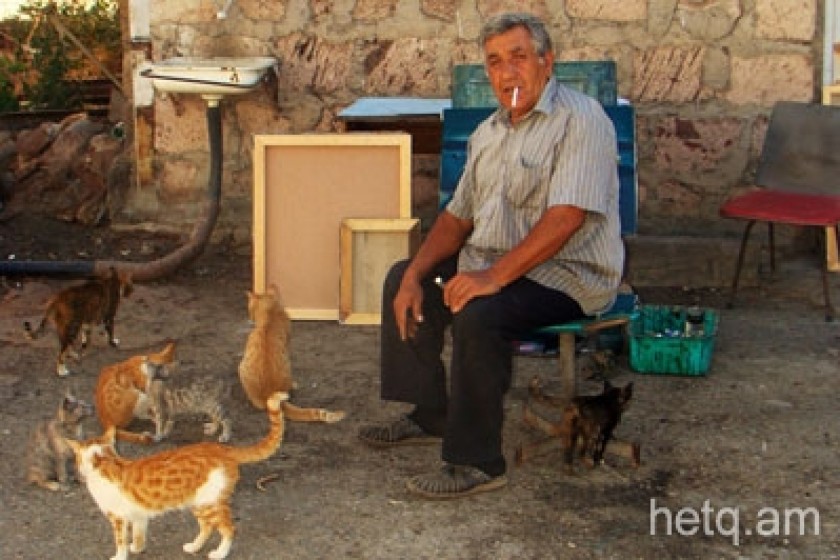 It’s a bit of a journey to get to where painter Apresik Aloyan calls home these days.

First, you have to find the Etchmiadzin tool factory and then ask the director for permission to enter.

Once inside the partially operating plant, you probably get some surprised stares from the workers – like I did. I had to tell them that I wanted to see the painter Apresik.

“It’s better that you don’t see where he lives,” one worker told me.

In a far corner of the factory, I came across what could best be described as someone’s miniature house, replete with cats, dogs, chickens and a few pigeons.

There were tubes of paint and unfinished canvases strewn about the place. I had finally found the painter’s studio. There was no roof over the workplace, allowing Apresik to paint under natural light.

One of the cats was attentively following Apresik as put paint to canvas. Another was playing with a tread of tire from an old motorcycle.

“I had two motorcycles, but the wheels no longer work on one,” said Apresik.

The factory director gave the painter a place to live after Apresik sold his house. He lives here but keeps his finished paintings elsewhere.

“My canvases wander here and there the world over. You can find many of my works in homes here in Etchmiadzin. One even hangs in the Etchmiadzin mayor’s office.

We sit down and talk. Apresik says that his only consolation is that many of his works have been bought by wealthy individuals and thus haven’t been lost.

The painter tells me that he cannot condone the evil done by people today.

Dark hues of green and yellow dominate many of his works. The eyes of strange people, gazing left and right, depicts the painter’s unique take on society today.

The painter chain smokes throughout our conversation.

“Nothing surprises me anymore here inArmenia. The country is going to hell in a hand basket. It’s like the people are in a ship, below decks, and haven’t a clue where the captain is steering them towards. We, the passengers, need to climb out and raise a fuss with the captain. Maybe, just maybe, there’ll be a chance for a change of direction.”

I ask Apresik about his painting routine.

“When my inspiration leaves me, I stop painting. I don’t force myself to paint.”

It occurs to me that the painter has found a peaceful haven here in this Etchmiadzin factory – away from people who only succeed in getting under his skin.

I ask Apresik whether the negative activities of today’s society can serve as new source of material for painters.

“The accomplished artist paints somewhere between good and evil. Here, everything is bad for art. I decided. I’ll draw up two hundred or so graphic pieces, throw them in my suitcase, and leave this country.”

The painter says he can get by overseas by staging one-man exhibitions.

“They’ll give me a one room apartment, that’s all I’ll need,” says the 65 year-old, dipping his brush in the dark green paint.