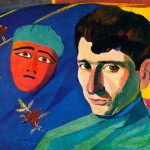 Gasbaryan argues that Professor James Russell has defamed Charents Davit Gasbaryan, a Charents specialist and a Doctor of Linguistics, claims that James Russell, Mashtots Professor of Armenian Studies at Harvard University, has incorrectly interpreted a series of homoerotic poems written by Yeghishe Charents and thus has defamed the name of the writer. Gasbaryan says Russell offered an "intimate" interpretation of the writer's work. As the story goes, in 1988 Professor Russell travelled to Armenia and struck up a friendship with Artashes Emin, the younger son of the poet Gevorg Emin. Russell says that Emin gave him a number of unpublished works by Charents for safekeeping. Gasbaryan claims that Russell published articles in the press about the writings and that no one in Armenia was aware of the fact. In 2008, a portion of these unpublished works were sold to the Charents Museum of Literature and Art. The asking price was 8 million AMD. The RA Ministry of Culture could only allocate 6.5 million. Thus, all the manuscripts could not be purchased. Gasbaryan is calling for the remainder to be brought back to Armenia as well.