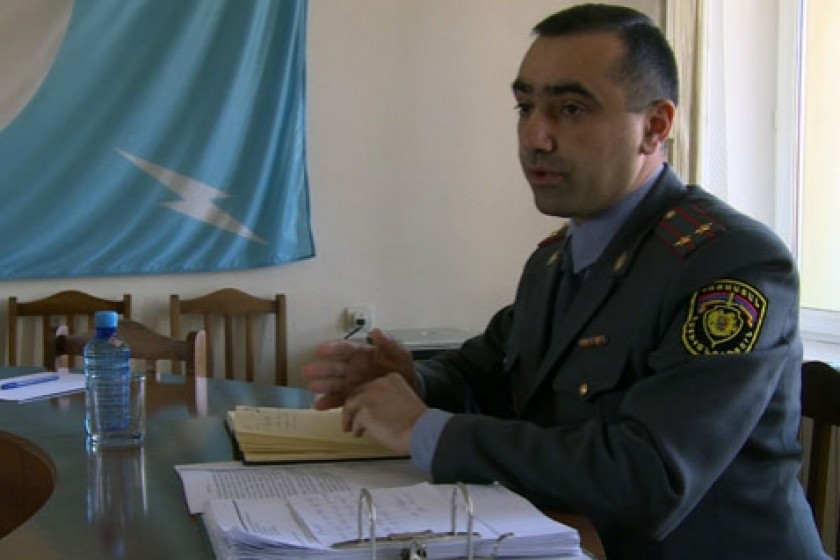 Swiss reporter Karl Ammann and cameraman Klaus Sparwasser have arrived in Yerevan to produce a film for German TV station ZDF regarding Armenia’s role in the trafficking of endangered animal species.

It would seem that Hetq’s recent investigative series on the matter has caught the attention of those engaged internationally in the battle to stem the multi-million dollar illegal trade.

In their quest, Ammann and Sparwasser first met with Ara Fidanyan, who heads Interpol’s national bureau in Armenia.

Fidanyan told Hetq that his office first heard about the importation of two bonobo chimps to Armenia in August 2013 from their colleagues in the in the Democratic Republic of the Congo (DRC). He then passed the information to law enforcement agencies in Armenia and a criminal case was launched. (The case is ongoing)

Fidanyan was reluctant to say anything more given the ongoing nature of the case.

Karl Ammann said that according to information supplied by Armenia’s State Revenue Committee, the number of such animals imported into Armenia and then exported to Russia and the United Arab Emirates is large. He adds that the Armenian charged in the case has partners in Dubai.

When I asked if the name of the Armenian trader had been entered into an Interpol watch list so that law enforcement agencies could be alerted if he travels to the DRC, Indonesia or other nations, Fidanyan claimed that his office had never heard of the man before.

Karl Ammann notes that at issue is not just the two bonobos but an entire list of other animals.

For example, chimpanzees, gibbons and other species enjoy the same legal status. The problem goes much deeper than the two bonobos that we know about. What about other endangered animals that have made it to Armenia via illegal means?

“We’ve provided the appropriate authorities with this information and must wait for the results,” Fidanyan said when referring to the wider picture.

When I asked Fidanyan if the DRC has demanded that Armenia hand over the animals in questions, he said that he hadn’t received any such request.

As to whether Russia or other countries had raised questions regarding the import and export of animals to and from Armenia, Fidanyan said his office hasn’t yet received any official requests for information from other nations.

Karl Ammann says that when the Interpol in the DRC first got in touch with its counterpart in Armenia, the Yerevan branch initially claimed that there weren’t any bonobos in the country.

It was only after Hetq broke the story, with actual photos, that the Interpol in Armenia changed its tune.

Ara Fidanyan says his office has amassed more than 100 documents relevant to the case and that they’ll do everything possible to uncover the truth.