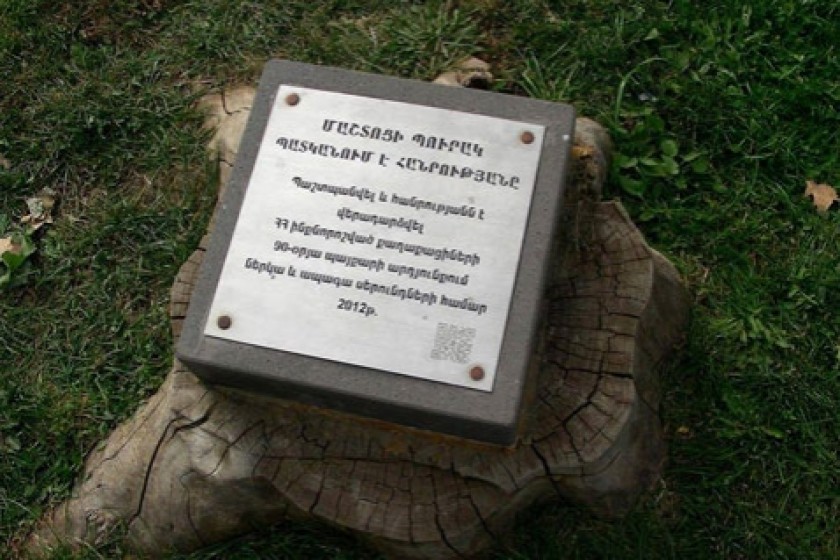 We are directing our letter to you, because the voice of the Armenian public is no longer being heard by the ruling authorities in Armenia. We, the citizens of the Republic of Armenian, who carried on a 90 day struggle demanding that an abandoned and derelict corner of Yerevan be saved and restored as a public park, are expressing strong disapproval that the RA authorities are once again taking anti-democratic steps, during President Hollande’s visit to Yerevan, by renaming the park after Misak Manushyan.

Mashtots Park has a symbolic value for social movements in Armenia. It was saved from being turned into a commercial space by a decision of the Yerevan City Hall.  The name “Mashtots Park” has been used by City Hall itself, and has gained wide recognition and acceptance by the public at-large, during the campaign to save the park. Since the saving of the park, the name has also been used by other governmental agencies and in official publications.

We are announcing that we consider the renaming, re- appropriation and co-optation of this public space with such important significance, as well as the neglect of the plaque in the park celebrating the victory of the campaign to save the park, to be unacceptable. The regime and the authorities in City Council are doing everything in their power to dismiss and devalue the principles of freedom, the right to peaceful assembly, and solidarity, and remove them from the space that represents these values in our city. It is especially unacceptable that they are attempting to erase the name of Mashtots Park, under the guise of French President Hollande’s visit and the using name of the French Republic, to curb Armenian democracy. Mashtots park is and will always be called MASHOTS PARK, as a symbol of the Armenian citizenry’s campaign to protect its constitutional rights, and as a platform for the freedom of expression and thought in Armenia.

While we are proud of the long and storied heritage of French-Armenian relations, and respect Misak Manushyan’s role in the resistance movement during the Second World War, we condemn the French Ambassador’s implicit consent and participation in an event that disgraces the struggle for democracy. We are certain that as representatives of a democratic country, you will refuse to participate in such an event. As an alternative, we propose that you discuss with the Armenian authorities the naming of another park after Misak Manushyan, or the creation of a new park that bears his name instead, a move that will be fully supported by us.

“This City Belongs To Us” Civil Initiative