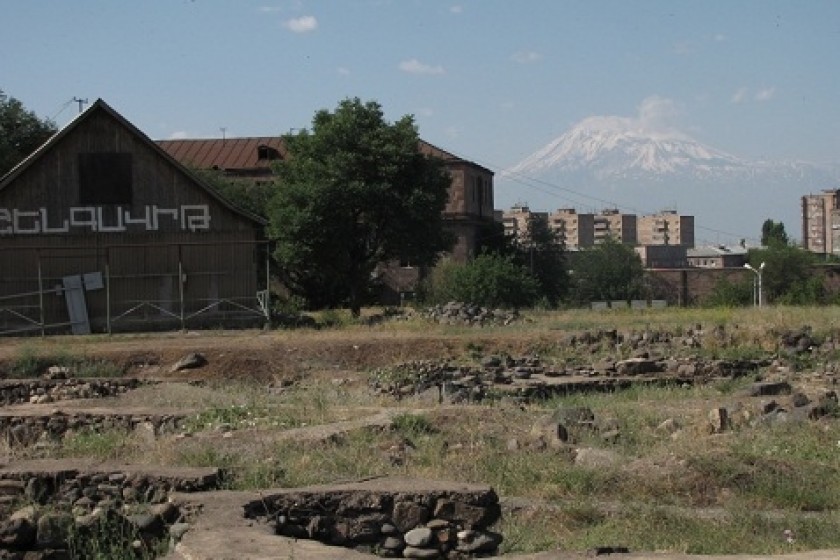 In August 2013 a number of newspapers published my report “Shengavit Historical and Archaeological Culture Preserve 2011-2013”. That report described the 4th millennium BC Shengavit Archaeological site, its museum, and its neglect by some of those responsible for its protection and preservation.

The 5 acre preserve above Yerevan Lake, across from the U.S. embassy, contains foundations of ancient dwellings and a small museum. Adjacent to the preserve is a private hospital (Hospital #6), and a private clinic, currently being renovated.  In 2012 the Cambridge Yerevan Sister City Association (CYSCA), working with Shengavit’s director Mr. Vladimir Tshagharyan, established a program to make available construction material to facilitate the site’s restoration.

The Shengavit Preserve is under the jurisdiction of the director of the Erebouni Museum, Mr. Gagik Gyurjyan. Erebouni’s director receives government funding to maintain three archaeological sites: Erebouni, Garmir Blur, and Shengavit.

Almost no funding is used to maintain or secure Shengavit and Garmir Blur. In 2012 Erebouni’s director indicated that CYSCA should fund Shengavit’s renovation through him, though he then consented to CYSCA’s plan to directly supply construction material for Shengavit. Later in 2013, with increased funding from CYSCA, Mr. Gyurjyan took steps to halt Shengavit’s continued renovation.

In April 2013 Shengavit’s director visited the Boston area where he addressed the Armenian community at the Armenian Library and Museum of America (ALMA) in Watertown and at a Knights of Vartan dinner in Worcester, MA. During Tchagharyan’s absence, Gyurjyan consented to a request from Hospital #6 to tear down a section of an attractive stone wall separating the hospital from the Shengavit Preserve. In the 2013 article this incident was reported as well as the complete lack of water, sewage, and rest room facilities at Shengavit. On numerous occasions Shengavit’s director requested funds for maintenance and the establishment of visitor amenities but was always told “There are no funds”. Apparently embarrassed by the 2013 report, Erebouni’s director completed the construction of a rest room and had the damaged wall repaired. Suddenly, miraculously funds had become available!

There remain serious infrastructure problems at the Shengavit Preserve. The wooden museum building needs structural reinforcement, heating, insulation, and ventilation. There is no plumbing within the building. The restroom, in a separate building, is intended for visitors. 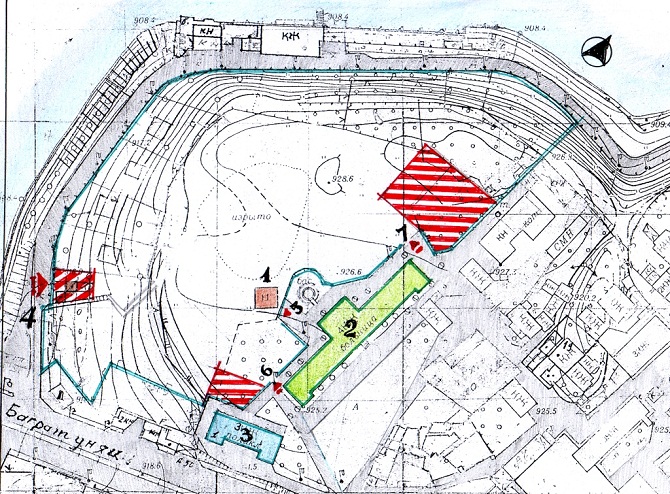 Due to frequent unauthorized removal of construction material, after Tshagharyan’s resignation most of CYSCA’s construction material was removed and donated to another project in Armenia. But three loads of cut stone intended to rebuild the museum’s walls, and a couple truckloads of sand were left in place as well as sheet metal to construct a pavilion to provide shade for staff and visitors. The museum building has not been reinforced and the sheet metal is rusting on the ground, despite the fact that it would take only a day’s work to build the pavilion.

Last year fencing was installed or repaired around 30% of Shengavit’s area. This summer the crew renovating the clinic next to Shengavit tore down some of the newly installed fencing. Without authorization they bulldozed a wide road whose edge extends 40-50 feet into the Shengavit Preserve. It is illegal to dig or excavate on archaeological sites without obtaining permission and a site survey. None of this was done.

The current entrance to Shengavit is intended to be the employees’ entrance and is accessible from the hospital parking lot. The visitors’ entrance from the time of the Shengavit Preserve’s establishment was intended to be from a small stone building near Yerevan Lake. Garbage is dumped in that building with impunity. There is no policing. The area around the lake and the entrance building is now being cleaned by a private organization. The entrance building has been fenced off – apparently that building is on its way to being privatized as well. There seems to be no explanation as to what is happening.

Although there is a janitor, hired directly by Erebouni’s director, grass and weeds are seldom cut. There is little or no security. On Monday, Aug. 13, 2014, a day when the site was closed, I happened to be nearby and walked to the site. Through torn down fencing I entered the site and looked around. I expected to be questioned by a policeman but this did not happen. There is no sign indicating unauthorized entry is forbidden. At night there is supposed to always be a policeman on duty, but on a site that large at night it is impossible to spot intruders without outside lighting.

The State History Museum, the Shengavit Museum, the Sardarabad Museum, and others contain Shengavit artifacts from 1936-1980 excavations. During the past two decades additional excavations have occurred but the retrieved artifacts are not stored at Shengavit’s museum as required by Armenian law. A full and detailed account containing the description and location of all Shengavit’s artifacts must be made public.

The lack of honest stewardship of Shengavit by Erebouni’s director is clear. He receives funding to manage and preserve three important cultural and archaeological preserves: Erebouni, Garmir Blur and Shengavit. No funding is supplied for the maintenance of Shengavit with the exception of his response to my embarrassing report published in August 2013, as described above. Garmir Blur, which is an important Urartian site in Yerevan, is serving as a dumping ground for construction waste! 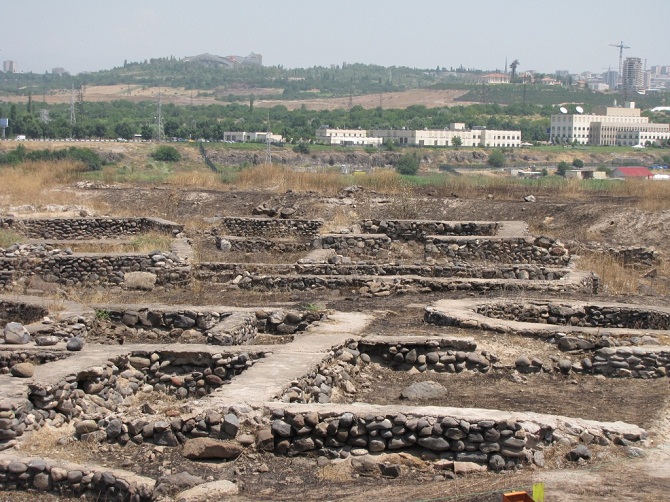 Moreover, Erebouni is intended for the study and protection of the Erebouni site and its Urartian culture and history. Shengavit is not a Urartian site. Its history, archaeology, and methods of study have little to do with Urartian history or archaeology. About an hour’s drive from Yerevan is the Agarak archaeological site. Recently 3-4 new signs have been installed there explaining the significance of the site and detailing its existence as a site of “Shengavit” culture. Yet in Yerevan, the Shengavit preserve is deliberately neglected, its land privatized for personal profit, and it remains unpublicized in tourist books and ignored by tour agencies. This is not an accident, this is on purpose!

Reports of abuse or damage to Armenia’s cultural monuments proceed through a bureaucratic labyrinth of organizations and departments before they reach a law enforcement stage. Other nations have streamlined law enforcement organizations to protect their cultural heritage sites, with violators severely punished. Armenia has over 30,000 listed cultural heritage sites. I hope they are not all for sale. Strict protection of these sites is required both from natural destruction, man-made destruction, looting, and from individuals who believe everything in Armenia is for sale.

Shengavit must be permanently removed from Erebouni’s jurisdiction for two reasons. First, to put it mildly, Erebouni’s leadership is interested in exploiting Shengavit, not preserving and protecting it, even though it receives funding for Shengavit! Second, Shengavit’s culture and archaeology has little or no relation to that studied at Erebouni. Like the Shengavit cultural and archaeological site at Agarak, Shengavit must be placed directly under the supervision of Armenia’s Ministry of Culture and Armenia’s press should keep a close eye on this and other cultural heritage sites.