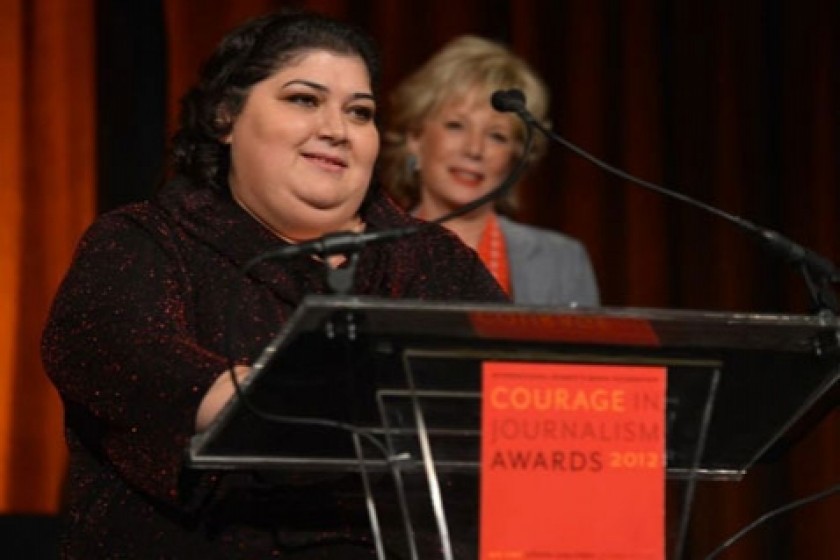 Khadija Ismayilova, an Azerbaijani investigative journalist and partner of the Organized Crime and Corruption Reporting Project (OCCRP), has told Radio Free Europe/Radio Liberty that she may face arrest upon her return to Baku Friday.

Ismayilova is returning from Strasbourg, where she met with members of the Parliamentary Assembly of Europe (PACE).

In addition to hosting a daily program for RFE/RL’s Azerbaijani service, she has written extensively on the business interests of the family of Azerbaijan President Ilham Aliyev. She said a criminal libel case has been opened against her and she has been ordered to appear in court on October 3.

"I have been warned that, upon returning from my trip, I will be facing arrest and maybe this is another way to warn me," she told RFE/RL in a telephone interview. "I believe they want me either not to go back to Azerbaijan or to be scared and not be loud about things in Azerbaijan. They have to understand that this is not the way to deal with me."

Ismayilova says the case is part of a broader crackdown against civil society that has been going on in Azerbaijan since May, when Baku took over the chairmanship of the Committee of Ministers of the Council of Europe. Azerbaijani rights activists say there are 98 political prisoners in Azerbaijan, 14 of whom are journalists and bloggers.

"Azerbaijan is fast becoming a serial violator of human rights especially when it comes to media,” said Drew Sullivan, OCCRP editor. “The problems started when reporters like Khadija started looking at how the Aliyev family has appropriated state assets for what appears to be their own personal gain.  If a prosecutor really looked carefully at this, I think they would indict the first family for corruption but I doubt that will ever happen in Azerbaijan where crime is a political and not a legal issue."

The case against Ismayilova involved a document that she posted on social media alleging that the Azerbaijani secret services used an explicit, illegally filmed sex tape to blackmail an opposition activist into informing on other opposition figures, RFE reports.

Ismayilova says that although she did not identify the individual, he has filed a criminal-libel complaint against her.