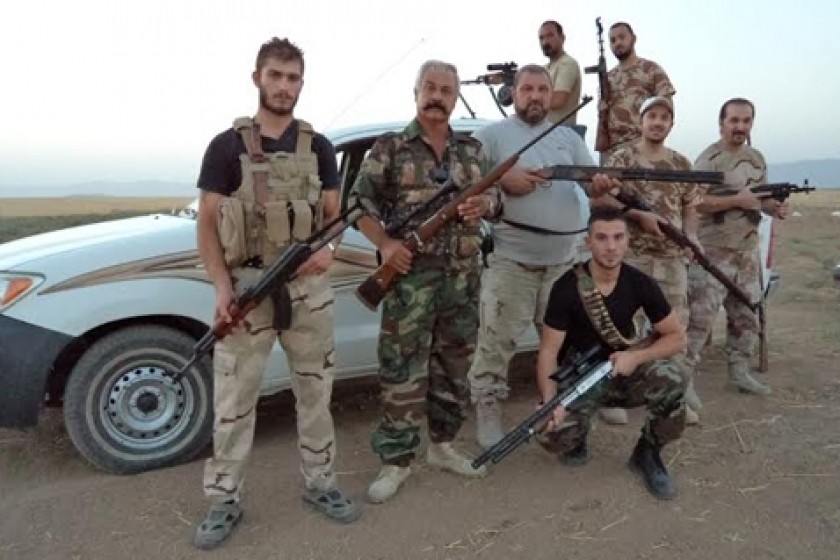 Commander Murad Vardanian - "We went to confront the treacherous enemy on the riverbank, before they reached our villages.”

They’re all towns and villages in Iraqi Kurdistan where Armenians are living today. Most speak Kurdish, but they still adhere to Christianity.

Their nationality and religion have made them a double target for the forces of ISIL/IS who seek to create a radical Islamic caliphate across large swaths of Iraq and Syria.

Recently, I came across an interesting post in Keghart.com written by a certain HamoMoskofian. He had recently travelled to the area and wrote about meeting MuradVardanian, a former Iraqi army commander, who now heads a group of local Armenian fighters defending these communities from ISIL assaults.

Intrigued, I wrote to Keghart.com and requested Moskofian’s contact details. Keghart’s editor DikranAbrahamian kindly responded with Moskofian’s email address. I wrote to him and last night received an email that he was in Yerevan but would be leaving the following evening.

I met Mr. Moskofian, something of a freelance journalist based in Beirut, this morning for a long and interesting talk regarding these nearly forgotten Armenians of Iraqi Kurdistan. I also wanted to find out what he’s been doing these past many years to facilitate bridge building between them and the wider Armenian world.

According to Moskofian, who told me he’s been to the area on thirteen separate occasions and who has met with Kurdish politicians, estimates there are upwards of 20,000 Armenians in Iraqi Kurdistan today. While I’ve come across much lower figures, he assured me that many Armenians from Mosul and Baghdad have sought sanctuary in the “autonomous” Kurdish province of Iraq given its relative stability when compared to the rest of the country.

Some live in Erbil (Kurdish Hewlêr), the largest city and capital of the Kurdish Regional Government in Iraq. According to a Bluebird Research map, some 500 Armenians were living there in 2009. That number has probably since swelled.

Another city with an Armenian presence is Kirkuk, 52 miles south of Erbil. Contested by Kurds, Arabs and Turkomens, it was taken over by Kurdish forces in June of this year after an ISIL offensive resulted in the flight of Iraqi government forces. The same map shows 500 Armenians living in Kirkuk as of 2009. I can’t say what the size of the community, established by survivors of the 1915 Armenian Genocide, is today.

As for Commander MuradVardanian, he’s the moukhtar (council head) of the Armenian village of Hawrezg (Armenian Havresk) in the governorate of Dohuk. 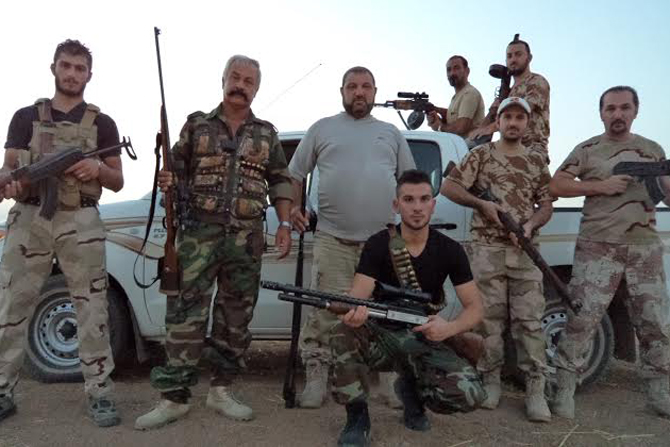 According to HamoMoskofian, the village was constructed in 1928 through the efforts of Levon Pasha Shaghoyan, and was reconstructed in 2006 by the former Minister of Finance of Iraqi Kurdistan SarkisAghajan; who is Armenian on his maternal side. (Shaghoyan was a general from Van who fought against the Ottoman Empire and then led many Van area Armenians to this part of Iraq in the late 1920s).

An Armenian church opened in Havresk some two years ago. 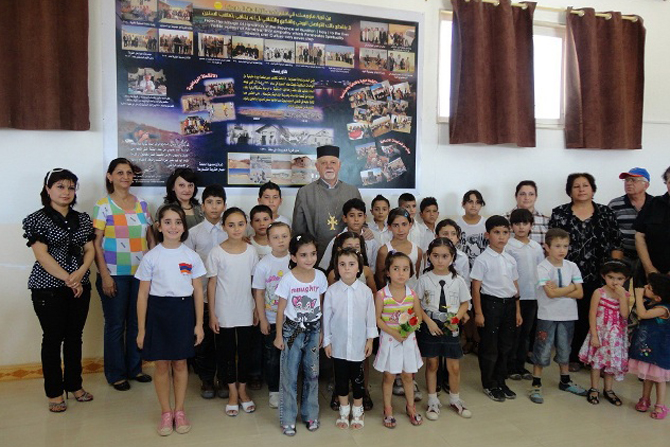 In his article, Moskofian writes that Commander Vardanian was surprised and angry that Armenia’s ambassador in Baghdad and the Armenian government have shown no interest in Iraqi Armenians.

During our conversation, I asked Moskofian about this and he confirmed what the commander had told him. It would appear that official Yerevan has no interest in forging contacts with these Armenians despite the fact that developments are progressing quickly - just a few hundred kilometers from Armenia.

Mr. Moskofian also chided the authorities in Yerevan for adopting such a shortsighted political approach. 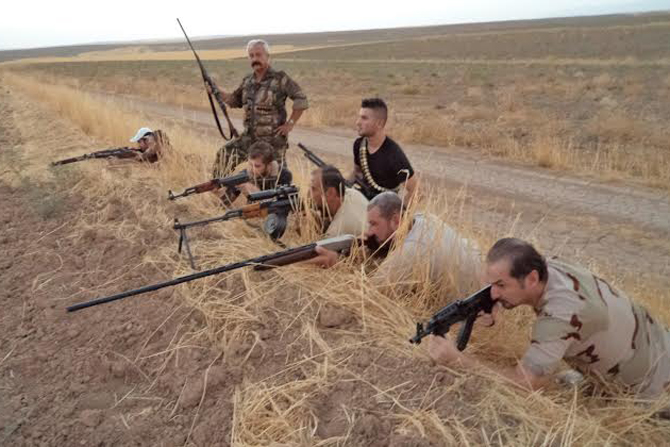 Commander Vardanian and his unit take their position

These Armenian villages in Iraqi Kurdistan - Avzrouk, Havresk, Ishkender – are to be found in the region between Zakho in the northwest and Dohuk to the southeast. A detailed map of the area can be accessed here.

Avzrouk (more specifically AvzroukMiri) is a village of some 350 Armenians with its St. Vartan Church.  It’s the native home of Aram Shahin Bakoyan, who fought with the Peshmerga against the Baathist Regime in the 1970s and later became an MP of the Kurdistan National Parliament. Bakoyan was succeeded as the Armenian community’s representative in the parliament by YervantAminian.

Today the Armenians of Iraqi Kurdistan have two Armenian schools (in Erbil and Dohuk) and three churches (in Dohuk, Avzrouk, Zakho).

In an October 2013 Kurdish Globe article, Father ArtounKhalatian (of the Zakho Armenian Church of the Virgin Mary) says that there are some 200 Armenian families in Zakho, a city of 350,000 just a few kilometers from the Iraqi border with Turkey. The community is comprised of descendants of Armenian Genocide survivors.

Father Khalatian says that there are 115 Armenian families in the town of Dohuk itself. The community has its own school and the St. NersesShnorhali Church (run by Father MassisShahinian), constructed by the architect and now Kurdish Parliament YervantAminian mentioned above.

If, as Mr. HamoMoskofian claims, the Armenian government would rather not be bothered, then it’s up to others.

In fact, Moskofian told me that the Armenian government hasn’t even attempted to open lines of communication with the Kurdish Regional Government, an oversight which has been noted in Erbil. Talk about a shortsighted foreign policy...

Luckily, the Armenians of Iraqi Kurdistan seem to be filling the gap on their own. As Commander Vardanian told Moskofian, “A delegation of the Kurdistan government visited us. They were extremely happy to see their Armenian brothers defending their second motherland beside Armenia...They promised all kinds of help."

When I refer to “the rest of us”, I’m not talking about the traditional Armenian establishment in the diaspora interfering for political gain as has been the case in the Hamshen Armenian community. These people need to be accepted for who they are and not regarded as some pawns for our arm-chair diasporan nationalists who conveniently sit back and let others do the fighting for them while they hover over maps and strategize over a future Armenia they can only dream about.

As events in this part of the world unfold daily, these Armenians can serve as vital foothold into a region that lies on the doorstep of historic Armenia. These footholds have grown scarcer with each passing decade.

Redirecting some of the funds, now being channeled into lobbying and other such vain pursuits, to assist these ArmeniansIraqi Kurdistan is perhaps one of the most practical steps Armenians casnnoew take to maintain one of these valuable footholds.

During the past few weeks when ISIL forces, with the apparent tacit support of Turkey, were besieging the town of Kobani, many Armenians raised a hue and cry – SAVE KOBANI!

All well and good. But now we have a chance, I would say a challenge, to finally do something on a practical level to assist these Armenians in Iraqi Kurdistan so that they can bothsurvive the current storm and remain where they are, rather than emigrating to Europe or the Americas.

But first, let’s at least accept them at face value and with the respect they deserve, without any preconditions. What are their needs and priorities? What, if anything, do they expect from their fellow genocide descendants scattered around the world?

For this to happen, we should start to build bridges across the divide that now separates us. And, in this case, the possibilities are endless. The hurdles to be overcome are probably much less than those involved in reaching out to those “hidden” Armenian Genocide descendants remaining in Turkey.

For those of us, descendants of Genocide survivors, not to reach out to these Armenians,would indeed be a moral crime.

Let’s search for what unites us, rather than what divides us.

Ed 2019-01-25 08:29:53
More power to our brothers and sister of Iraq. I only regret that they trust Moskofian.
Hetq 2019-01-25 08:29:53
Let's not start making charges/counter-charges against this or that person mentioned in the above article without any degree of substantiation. Accusations not backed up with any rational argument are unacceptable.
Gayaz Iskhaki 2018-06-12 03:06:20
My way has not been easy, a warrior born some 2,000 seasons yon . My way has led me in all directions , to all fronts in space and time . My way is infinite and elusive .... Now if you'll excuse me,  I must be on my way.
zohrab 2014-10-22 22:35:02
Healthy armenian debate
Souren 2014-10-21 15:34:44
And all those Sunday School kids are really Mossad agents...
Herepta 2014-10-21 13:45:49
Ara Sutlian provides us with convincing information about Hamo, while Ed claims that Hamo is not even an Armenian. Eeeny, meeeni, miniee, mo, .... I think I will side with Ara. He comes across as fair dinkum. Besides, he is a real person; he was a student at MEI in Cyprus in the early 70s; my school. Let's see now. Could Ed possibly be a stirrer? an agitator perhaps, one who enjoys creating friction between people? What do you think folks? Should we blackist his name? Should we sully his name the way he does it to others? Maybe not! I'd like to think that I am above his level. Nevertheless, I'll make a mental note of him and beware of his character assassinating tendencies. Beware Ed!! Remember. Next time you point your finger at others, three of your own fingers will be pointing at you.
Ed 2014-10-20 21:50:41
Yes Hamo, why don't you say it - you are not even Armenian.
Ara Sutlian 2014-10-20 18:10:08
This message is for Ed:- Hamo Moskofian was a student in Beirut at AGBU's Nazarian school and then Hovagimian-Manoogian and I haven't seen him probably since 1968, since I live in United States so he isn't a friend of mine that I am defending him but facts are facts. His sister was my classmate and her name was Shoghig. He wrote articles in Zartonk newspaper. If you are a Lebanese Armenian since you are claiming one I am pretty sure you know Zartonk wasn't a right wing newspaper in fact it was the organ on Ramgavars. come on Ed use your senses 1956-58 in Lebanon doesn't ring a bell to you? or if you were too young to remember ask your parents or better yet read and then you will have an idea why the church and the Armenians in Lebanon were divided;He is doing a journalistic piece and giving an interesting information regarding the Armenians. Good job Hamo. before trashing a person without giving any facts.
Mgrdich 2014-10-20 15:28:52
Armenians like Ed just like to throw the dirt around. Maybe Moskofian does indeed work for Israel. Ok, so what. The KRG in Iraq is itself well-known fas a recipient of Israeli largese. In the messed up jigsaw of Mid-East politics, telling the good guys from the bad is sometimes as difficult as splitting hairs blindfolded.
zohrab 2014-10-20 13:22:54
ed how about you go there help
Herepta 2014-10-20 12:39:38
One has to wonder about the nature of Ed's comment. He might possibly have a secret agenda which causes him to throw mud at others. He might also know things about Hamo that we are not privy to. It is best to mark him mentally, and take him with a grain of salt.
Hamo. 2014-10-20 08:32:11
ED SHUT YOUR DIRTY MOUTH!I AM NOT AN ISRAELI AGENT !I AM A LEBANESE ARMENIAN WHO FOUGHT FOR HIS NATION SINCE 1976
Ed 2014-10-19 17:32:14
Hetq, no, they don't have alternatives. That's one the reason why the vacuum is filled with Israeli agents like Moskofian.
Vardan 2014-10-19 16:23:16
I fully support the author!! There is no Armenian authorities as it.. They think only for their own pocket and that's all, there is no proper manthality... they are like cancer cells....
zohrab 2014-10-19 09:43:46
at least he is there and ready who are we from far to judge him do it