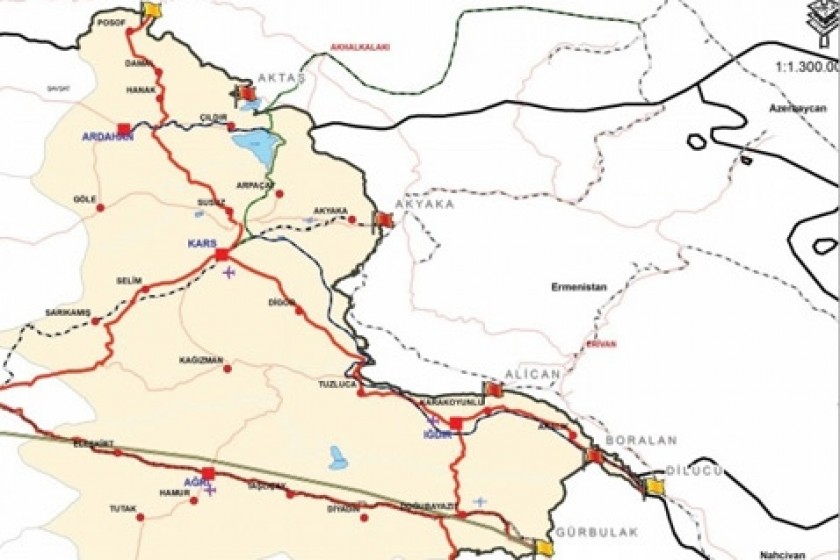 According to a recent study entitled ‘‘Research on the Socio-Economic Impact of the Turkey-Armenia Border’’ commissioned by the Hrant Dink Foundation it would appear that the closed border between the two neighboring countries is hurting citizens on the Turkish side more than the Armenian.

The TRA2 region (Kars, Iğdır, Ağrı, Ardahan),a majority of which is located right on the border with Armenia, cannot benefit from the opportunities offered by free trade agreements – unlike the other regions of Turkey – due to the sealed border. The region also cannot benefit from the indirect trade between Armenia and Turkey as the border is closed and these goods get shipped from regions close to Georgia or Iran borders. Besides, since the existing trade with Armenia is not legal and comes at a high transit cost, due to the sealed land border, the volume of the existing trade remains very limited.

According to Zümrüt İmamoğlu, a Research Associate at Bahcesehir University’s Center for Economic and Social Research, Turkey’s opening the border with Armenia would not only mean economic development and growth for the residents of Kars, but also a window to communicate with the outside world.

“People say that their lives end at the border and that they want to change that end point and to feel free. There are those who say that Turkey, by keeping the border closed, is penalizing the residents of Kars and not Armenia,” says İmamoğlu, who presented the conclusions of the study at a two day conference held in Ankara on November 22 and 23.

The study also concludes that despite the small scale of Armenia’s economy, opening the border would benefit the eastern regions of Turkey substantially.

It is estimated that employment in the border region will increase approximately by fifty percent within a period of five years in case of opening up of the Armenia border. Retail trade, accommodation and transportation sectors are amongst those that are expected to grow. The study findings suggest that the opening of the border will not only increase transit trade but will also have real impact on the regional economy.

The study notes that residents of the Kars Province (located in Turkey’s TRA2 development zone; the least developed in Turkey) have been migrating. Fourteen years ago the region had a population of 325,000. That number now stands at 78,000.

During her presentation İmamoğlu noted that residents complained that they couldn’t take advantage of the trade taking place with Armenia since it now passes through Georgia.

While Turkey continues to trade with all the neighbouring countries in her land borders, with or without signed free trade agreements, her border with Armenia remains sealed since 1993. This is indeed the only closed land border in Turkey. Besides, import and export activities with Armenia are carried out through indirect channels and in limited volumes. There are anecdotes and accounts referring to the limited volume of goods being exported to Armenia through other countries (Georgia, Iran). According to the estimates from Armenia, every year goods worth US$300 million are imported from Turkey. 1 On the other hand, official data in Turkey gives us different figures; exports to Armenia were US$241,000 in 2012, and imports from Armenia were US$222,000.

Given that Kars has no manufacturing base, the Turkish government has tried to encourage people to stay and work in the region by lifting tax obligations.

“But people say they would rather be registered as unemployed and receive benefits rather than paying social security to the state,” says the researcher.

The study concludes that if the border would open the number of registered private sector workers would increase 7% every year in the region.

“One of the most terrible things is that people have lost the optimism and will to live. They say it’s like they’ve been covered with graveyard dirt and are slowly dying,” İmamoğlu said.

Alibeyoğlu has always spoken in favor of opening the border and normalizing relations between Turkey and Armenia.

During his tenure in office, Alibeyoğlu launched a campaign in 2005 in which 50,000 inhabitants of Kars signed a petition for open borders and submitted their common demand to the government.

Sayat Tekir, an Istanbul Armenia researcher who conducted interviews on both sides of the closed border, says that he found people on either side to be excited about the prospect of an open border.

“However, at the same time, they also felt fear, saying that they do not recognize those living on the other side and that while they freely walk the streets on their side, they don’t know what will happen if the border is opened,” Tekir says.

Regarding the past history of the region, we read the following policy recommendation on page 76 of the study:

It is necessary for the region to lay claim to its historical past and to, once again, receive all the people who have lived here with open arms in order for it to be able to evaluate the tourism potential of the region. Hence it is imperative for the historical fabric of the city to be preserved, for the sites of ruins to be maintained and for new archaeological excavations and similar activities to be initiated.

P.S. The “Research on the Socio-Economic Impact of the Turkey-Armenia Border” was commissioned by the Hrant Dink Foundation with the support of TÜSİAD (Industry and Business Association of Turkey) and Istanbul Policy Center (IPC). The study was conducted by two institutions reputable in their fields: BETAM (Bahçeşehir University Center for Economic and Social Research) and SAM (Social Research Center)

AGatian 2014-12-09 23:15:11
I have no doubt regarding the factual study done by HD Foundation. It's a fact that based on the economies of the two countries, for Armenia open border is vital.For Turkey being a member of G20 the political gains outweighs the the yield of open border with Armenia. If Armenia accepts all the terms put forward by Turkey as a condition to the opening of the border, there's no guarantee that another dispute between Armenia and Turkey or Azerbaijan won't be used as an excuse to close the border again.Armenia first should put it house in order first by eliminating issues that are common with ex-Soviet countries and start a dynamic business model based on high tech industries. Transparency,almost zero corruption is a must for success of such an economy For instance surgical instrument industry is ideal sector where an entire month's production of a mid-size company can be transported with a single load of cargo plane .Turkey skillfully uses this weakness of Armenia and based on history they will use all over again. The more options are considered away from Turkey, the less leverage Turkey and Azerbaijan will have over Armenia.