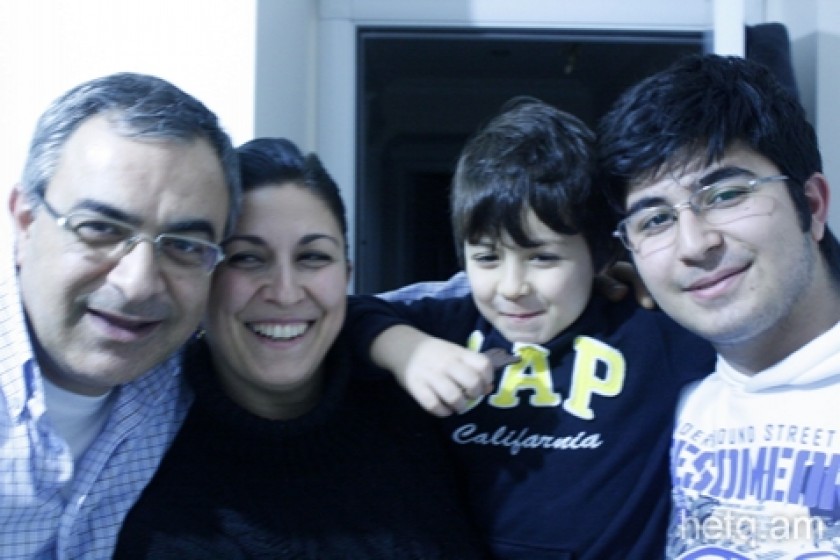 The war raging in Syria has made refugees of Dzovig Vahramian’s family.

She and her two sons – Harout and Hagop – moved to Istanbul two years ago. Her husband Hrach joined them two months ago. He jokes that Dzovig really likes the letter “H” and that’s why she has three of them – Hrach, Harout and Hagop.

Hrach remained in Aleppo, hoping that things would change for the better. They didn’t.

The parents chose Istanbul because Dzovig has an aunt living there and because they both speak Turkish.

“But I won’t live here,” says Mrs. Vahramian. “There’s no future here and the education is lacking. My Harout was quite successful playing piano and chess back in Aleppo. Here, he’s left it all behind because there’s nowhere to go here.”

Estimates place the number of Armenians who fled Syria and are now living in Armenia at some 11,000. Many have left for other countries; even Turkey. They are just a tiny fraction of the 1.6 million Syrian refuges now in Turkey. Since Ankara doesn’t keep refuges figures broken down according to ethnicity, the number of Syrian-Armenians now residing in Turkey is unclear.

Mrs. Vahramian says her biggest worry in Turkey revolves around the issue of their Armenian identity.

She does not allow her sons to ride the buses in Istanbul by themselves out of the fear that they might be overheard speaking something other than Turkish and that, as a result of further questioning, they will be identified as Armenian.

“I tell them not to speak Armenian,” Dzovig says.

“The daily environment isn’t Armenian,” says Dzovig. “At parent-teacher meetings only the Armenian language teacher speaks Armenian. The parents and other teachers can’t speak the language. When I speak Armenian, they want it translated in Turkish.”

Istanbul-Armenian businessman Dikran Altoun says the children know their grammar rules very well but are unable to put two words together and make a sentence because they do not speak the language. He says they tried to send local teachers to Armenia and to invite teachers from Yerevan, but that the differences between western and eastern Armenian prevents the project from really taking off.

Altoun says that the community now sends ten teachers to the Mkhitarist Armenian congregation in Venice for training in western Armenian.

“But this isn’t adequate because when they leave the classes they revert to Turkish since everyone else is speaking Italian,” he says, adding that the community is now thinking of sending some teachers to Beirut.

Mrs. Vahramian, an architect by profession, says that Aleppo is her home and that she has no life elsewhere. She drew up the plans for one of the buildings for the AGBU School in Aleppo. Her roots, like many Aleppo Armenians, can be traced back to Cilicia. Her father’s side of the family hails from Aintab.

“I say this because Armenians enjoyed many freedoms in Aleppo, and we never felt any conflict between Muslims and Christians. On New Year’s we would shoot off fireworks and the Muslims would come to join in the festivities. Here, even educated Armenians wonder why they should decorate a Christmas tree,” she says.

Hrach says that during his 52 years he’s witnessed the opening of two new Armenian churches and that five of Aleppo’s seven major theaters were Armenian. He proudly points out that there were no poor Armenians in Aleppo and that they all belonged to the middle and upper classes.

“Even the water and electricity for Armenian churches, just like for mosques, were provided free of charge. It was the same for the other minorities,” Hrach says. “But Aleppo has changed and I am worried that the old times won’t come back. You have the regime and the opposition at loggerheads, each accusing the other of murdering their brothers.”

Hrach received his college education in Armenia in the 1980s at the State Polytechnic Institute.

“I spent the best days of my life in Armenia,” he says with a smile. Hrach says his 25 years as a builder have all gone up in smoke.

While normal daily life in Syria has been disrupted due to the ongoing civil war, the Vahramian family decided to leave Aleppo relatively late. They lived in the center of town, an area under the control of the Assad regime. This is in contrast to the predominately Armenian populated Nor Kyugh neighborhood, located on the outskirts of the town. Over the past four years or so, half the neighborhood has been reduced to rubble.

“At the time, I was leaving the university with four other teachers. The first blast hit and the force threw us back. The air became fog like with dust. The students started to scream for help. The windows shattered and pieces hit my face. Then the second blast hit,” Dzovig relates, her body shaking with emotion. “We ran for the bathhouse. My students yelled that I was covered in red. I looked in the mirror and saw my whole face was bloodied. Ten students died that day and we were miraculously saved. Had we left earlier, we would have been where the rockets hit.”

Since she speaks French and Arabic, Dzovig had no trouble finding work in Istanbul. But she doesn’t like her work as a foreign sales manager.

“I have to travel a lot for work. I traveled to three countries in three nights. I saw Greece and Dubai but all of it isn’t worth just one day of living in Aleppo.”

While the family says it will not stay in Istanbul, they haven’t yet decided where to go next. They are toying with the idea of Canada or Australia.

“But those places are so far away. How will we ever return?” Dzovig says, hopeful that they’ll go back to Aleppo. Her husband strikes a less optimistic note on the chances of returning.

“I believe that things will get better and that I will return. I’ll open a studio and construct buildings in Aleppo,” says a determined Dzovig.