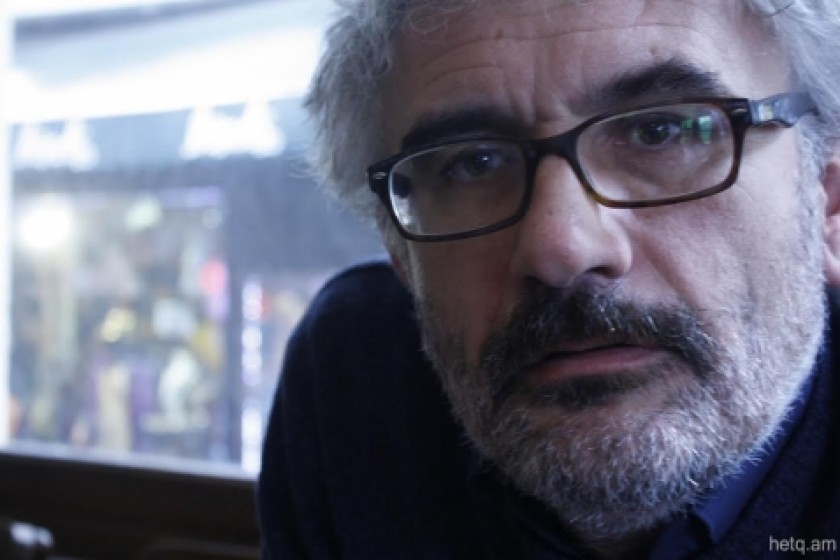 Italian Researcher: Armenian and Azerbaijani Migrants in Turkey Both Want to Make Money

Hetq talks to Italian sociologist Fabio Salomoni, a faculty member at Koç University’s Social Sciences and Humanities, who began to take an interest in Turkey in the 1990s.

Referring to the southern Caucasus, Salomoni argues that the only reason the world is interested in the area was the Karabakh War, despite the fact that some one million migrants left Armenia during those years and probably an equal number from Azerbaijan.

What are the differences, if any, between Armenian and Azerbaijan migrants residing in Turkey?

It’s difficult to compare these two communities. Sometimes they express this difference in the most unexpected manner. Yes, one can say that Armenia and Turkey are enemies and that Armenians should have big issues with Turkey, but sometimes the opposite occurs.

Armenian migrants have the same issues with Turkish employers as any other migrant group.

Azerbaijanis shouldn’t have problems in Turkey, but if you ask an average Turk about their opinion regarding Azerbaijanis the only thing they know is that they speak a laughable and strange sort of Turkish and that their accent is different.

But there is also a sub-context to the ridicule – of communism, soviets and atheism. Sure the Azerbaijanis are Muslims, but not real Muslims, because they do not think about religion much.

Perhaps the biggest difference is in regards to expectations. When Azerbaijanis come to Turkey, they believe that they are going to see their brothers and will work besides them. But this isn’t how it works out. They are still migrants. That myth about brotherhood is pure rhetoric.

What relations exist, if any, between Armenian and Azerbaijani migrants?

There are places where both sides come into contact; whether they like to or not. Take the police station for example. Since most are illegal migrants, that’s where they end up if detained. They are also side by side when working as street vendors.

As to how they communicate with one another mainly depends on their age. The older ones have a history of living together and thus they get along better. The younger ones do not mingle because they lack such a history. It’s much harder for them to compose a positive picture of the other. Nevertheless, there are times when they must get along; say when they work in a factory together.

But ultimately, the one trait they share is that they have come to Turkey to make money. This main issue pushes the national context aside. Both communities understand that it’s best if they avoid confrontation.

Of course, if certain Azerbaijani have links to nationalist Turkish groups they may display greater aggression towards Armenians but, in the main, that’s not the case.

How do these two communities feel in Turkey?

First, I’d like to stress that while most Armenians from Armenia in Turkey are women, there are also many young people and seniors; also children. The Azerbaijani community is more balanced in terms of sex.

Many Azerbaijanis are disillusioned because the majority of them want settle in Turkey. They see Turkey as a country where they can receive easy citizenship. But that’s not the case, even for them.

Most Armenians, on the other hand, do not plan to live the rest of their lives in Turkey. They cannot picture themselves as part of Turkish society. However, there are many Armenian migrants who have lived there for ten or more years.

In reality, in a way, it is easier for Armenians because most migrants work as house cleaners. Such jobs are regarded as good and easy. That’s to say such work isn’t the worst kind to find. The men, in the main, work in factories where the pay is less and the work harder.

Have you tried to ascertain how many Armenian migrants there are in Istanbul?

It’s an impossible task because statistics on migrants in Turkey aren’t kept. However, I was once told by the Azerbaijani embassy that some 50,000 Azerbaijani migrants were in Turkey. They are five times more Azerbaijanis than Armenians.

Is the number of Armenian migrants growing or getting smaller?

I have the feeling that the flow of migrants from Armenia has decreased over the past three years. The same holds true for Armenians going to Turkey on business.

Large numbers of Armenians came to Istanbul in the late 1990s. Even though Russia at the time was the most attractive for Armenian migrants overall, Turkey was more attractive for middle aged Armenian women who couldn’t overcome the economic problems facing them in Armenia after independence. They had to make a living somehow and the most immediate solution was in Turkey. It was inexpensive and nearby, and there were jobs for women.

Azerbaijanis started coming to Turkey in the late 1980s, a decade or so before the Armenians.

Around two years ago, Turkey adopted a new law regarding visas and residency status. How has it affected the Armenian migrant community?

I believe it made things tougher for illegal migrants. Prior to the new law, they could enter Turkey with a three month tourist visa, leave the country, and then receive another three month visa. The new law stipulates they can only stay in Turkey for six months in a one year period. It’s limited their mobility and forces them to apply for legal residency status.

Illegal migrants have no rights in Turkey when something happens to them and they have issues to resolve. However, if these people are in Turkey, it would appear that the country has a need of them and must come to grips with their existence. What is Turkey doing in this direction?

For a long time, Turkey was a labor exporter. During the past ten years, it has witnessed a return of migrants and has become a final destination country. In reality, people come to Turkey for work. This is something new for the country and is forcing Turkey to change. This is a big challenge. This law was the first step in the process.

There’s an idea that it would be good to create a resource center in Kumkapi or another place with many Armenians for the Armenian migrants; a center where they could go to get assistance legally. What do you think?

In the past 3-5 years, a number of organizations have started to get involved in migration issues. When I first arrived in Turkey no one was interested in the plight of migrants. Such assistance centers are needed not only for Armenians but for all migrants since they share the same issues.

For example, migrants from Armenia have been able to get a school for their kids opened. Other migrant groups still don’t have such a school.

Many Azerbaijani migrants pay to send their children to local Turkish schools. But not all can afford to do so. Turkey must think of ways to solve the education issue of migrant children.

However, no one in the education system is focusing attention on where migrant children must go to school or for medical help. Sometimes, Armenian migrants can go to Armenian community hospitals.

If you go to Europe, you’ll see that the migration issue is a top concern in all respects. But at the moment, in Turkey, there hasn't been any political solution to the problem. It’s all left to the communities to handle in their own way.

If one cannot enter the Turkish education system, the migrant community then builds its own school, just like the Armenians have done. Who knows how long this approach will last.