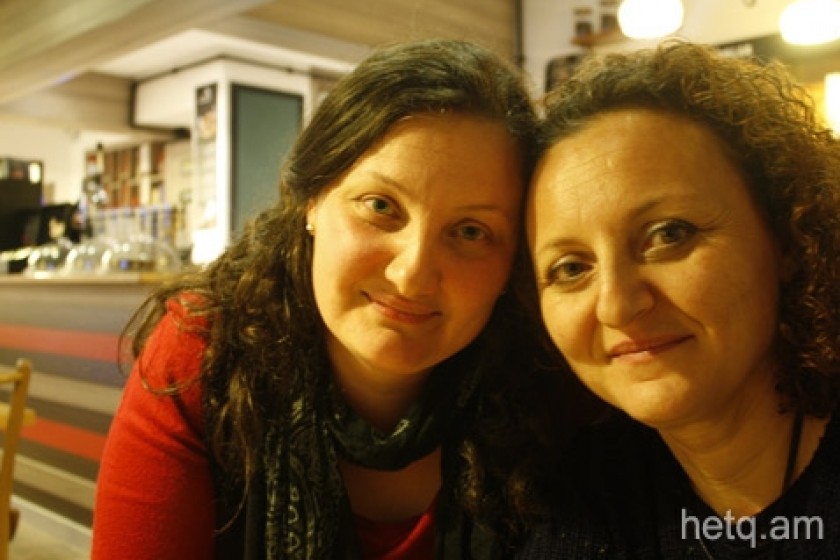 The Emeksiz Sisters of Istanbul: “The Armenians call us Turks, and the Turks call us Armenians”

The Emeksiz sisters of Istanbul are on a mission to tell people in Armenia about the fate of their Armenian grandfather Khachik and others who shared the same fate due to the 1915 Genocide.

The two sisters, both Emeksiz, are named after their Armenian grandfather Khachik Emeksizian.

Born in the Uzunmahmud village in the Ottoman Kaza of Ordu on the Black Sea, Khachik Emeksizian was seven years old in 1915.  The boy survived the Genocide because he was taken to a nearby village and given to a Turkish family who raised him as a Muslim. The law at the time was that children seven and younger would not be sent on the road to exile but would be distributed to local Turkish families.

The sisters, who call their grandfather Hachik (there is no letter “kh” in the Turkish alphabet), claim they feel neither Armenian or Turkish; just human beings.

“We are a part of history, and I want that within Armenian society my grandfather be known as an Armenian,” says the elder sister Emeksiz. “What happened to my grandfather wasn’t of his choosing and neither of mine.”

There were some 13,565 Armenians living in the Ordu Kaza (on the eve of 1915 according to Raymond Kevorkian’s The Armenian Genocide. Uzunmahmud is said to have had a population of 388. Kevorkian states that most of the Armenians of Ordu had roots in Hamshen and had settled relatively late in Ordu. Three thousand of the kaza’s Armenians resided in the principal town (Ordu) and the others lived scattered in about 29 villages.

Seven year-old Hacik never forgot that he was Armenian. He never forgot his parents, the house he lived in and where it was located. He even kept the root of his surname in the hope that one day he’d find lost relatives through the name.

The sisters told me that two years after the Genocide their grandfather found out that some people had come to the church in his old village. It turns out they were looking for Armenian orphans to send to the United States, France and elsewhere. Hacik told the sisters that he didn’t want to go and returned to his adoptive family. At the time, the boy was afraid that surviving family members might look for him and not find him.

One of Hachik’s cousins was sent to France in this fashion. Decades later, the sisters did a last name search and found the cousin.

At the age of twenty, Hachik married one of the daughters of the household and started a family.

“I am very angry because my grandfather was left alone without a family or possessions,” says the younger sister Emeksiz. “We know the family had land that was used by others.”

Hachik Emeksiz had six sons and many grandchildren. They all know his story but not all want to accept it. Emeksiz says her grandfather always told them the story, saying it was their history as well and that they must know it.

“My being angry will not change my grandfather’s life or past. But he is not alone. There were thousands of children like him,” says the younger Emeksiz. “We just want to talk about this matter to Armenians and Turks because Armenians call us Turks and Turks call us Armenians.”

She tells me that her grandfather always brought up the name of his sister, Nazlou. She had long hair, down to her waist, and he always played with her tresses.

The sisters say they do not talk about their grandfather being Armenian everywhere. It could make them hate targets of Turkish nationalists very easily.

I am neither religious nor a nationalist. This creates problems in certain circles,” says the elder Emeksiz. “Many of my cousins don’t want the word to get out. They want this story to be forgotten.”

Nevertheless, she says that she tells the story about her grandfather being Armenian and that many Turks are amazed to hear that Armenians lived in Anatolia. They even ask when Armenians came to those lands.

Grandfather Khachik died fourteen years ago and the sisters now regret not spending more time with him. They didn’t live in the same house but visited periodically.

The elder Emeksiz studies film making at an Istanbul university. She’s decided to makr a film about her grandfather and the family story.

“My grandfather was seven when he was orphaned. There were thousands of kids like him. I want to tell this story to people through film.”

Renée Van Leeuwen 2021-10-29 00:34:27
Craig, if you ever see this please email me at [email protected] My grandfather was Hagop Anmahian and his family came from Ordu and had a hazelnut business.
Anna Emiksazyan 2020-05-12 01:54:24
Dear sister's Emeksiz.I think you find .
EMEKSIZ David 2019-01-25 08:30:28
Strange coincidence: my grandmother (not an EMEKSIZ) of Armenian origin was saved during the war by my grandfather (an EMEKSIZ who was Turkish). She had to change her name, got married to him and spent the rest of her life like a real Turkish woman. My father, he married an Armenian too. I share my life between these 2 communities that hate each other unfortunately and yet have so much in common.
samo 2019-01-25 08:29:59
For a long time I tried hard not to be a foreigner in Armenia (I was born there) and USA.. Now I kind of like it, I'll be foreigner when I die. Being a foreigner has it's benefits, less confusion once you accept it. The expectations are moderated. It's all wilderness until one crosses the Jordan.
Հակառեժիմ 2019-01-25 08:29:59
Ինձ համար իսլամացած հայն էլ, եթե ընդունում է հայ լինել,ը ուրեմն հայ է։ իսկ ի՞նչ ասենք էն ,,հայերի,, մասին, որ մուսուլման չեն, բայց մուսուլմանից բեթար լլկում են ու թալանում անպաշտպան հայ ժողովրդին ու հոշոտում են Հայաստանը
Ravi ekmekian 2019-01-25 08:29:59
My grandfather was 7 when he was orphaned as well, but he did leave ourfa with his 2 sisters, on the way he got separated, got picked up by a bedwin, but ultimately ran away, & got reunited with his only surviving brother in Aleppo. Please make the film, let me know if you need help.
Berge 2019-01-25 08:29:59
Dear Emeksiz sistres, You story is indeed similar to so many Armenians! However, to make it easy on you to understand where you belong i Will use your own words: angry
Matt Chinian 2016-03-07 01:24:33
My maternal great grandparents were from Ordu, Hatchig Seferian came to Boston in 1901 his wife, Peruse, met and married him on Ellis Island a few years later, they helped many Armenians come over, but most were murdered in the genocide.
Ara 2015-07-10 22:36:25
Dear sisters, Thank you for sharing your story. My father was born in Ordu in 1898. In September I will travel to Ordu for the purpose of trying to find his neighborhood. Can you possibly offer any advice on how I might locate what section of Ordu the Jeknavorian family is from? thanks, Ara
Josette Vézina-Shamlian 2015-03-09 20:09:48
Bon courage Harchiges. This is a message from Canada. My late husband Garo Shamlian lost sixteen membres of his family in Turkey during the Genocide. My two daughters Annik and Isabelle both speek, read, and write Armenian. In 2009, Annik and I went to Ani (Eastern Turkey) and we spread his ashes inside the Ani Cathédrale that he cherished so much. Please go ahead with your film and be proud of your origines. If you have a chance, go to Armenia, its beautiful and extremely rich culturaly speeking.
Garegin Nalbandian 2015-03-08 01:17:47
One cannot read this story without tears. Thank you for sharing!
Craig 2015-03-07 09:49:49
My grandmother was from Ordu too. They lost everything. They had a hazelnut business. Land. The family name was Anmahian. Everyone was killed by the Turks
Zarik Hacopian 2015-03-06 15:01:45
This is the story of more Turkish people than they or want to believe. Most Armenian grandparents his their identity out of fear. Khachik was a unique, brave victim...his granddaughters, Emeksiz sisters are great examples for so many like themselves. They need to make documentaries about the the Turkish descendants of stolen Armenian children. What shocks me is that in this time and age, with such easy access to information, how could the younger Turkish population not be aware of their own true history and that of the Armenians of Anatolia. I know the brainwashing and terror tactics of that country, but now there is internet access, tourism, travel to other countries. Turks here even in US colleges where there is so much contact with others, continue to maintain their government's lies. At that point, I believe it is no longer ignorance.....
Robert 2015-03-05 15:11:18
Fascinating story (yes... please make the film) that reminds me of my grandfather Avedis's younger brother Tigran. While my grandfather immigrated to the US in 1912 - 13, Tigran stayed behind in the town of Husenig (Kharpert/Elazig province) with his parents and younger sister. There's various stories about what happened to him. Some say he was shot in the back while trying to run from a burning church. As far as I know though, there is no definitive account of what happened to Tigran, or his parents and sister, so I've often wondered if somehow Tigran was adopted by Turks or Kurds and continued his life in the Old Country. There are so many stories like this that need to be told.